Book Review: Above the Pavement - the Farm! 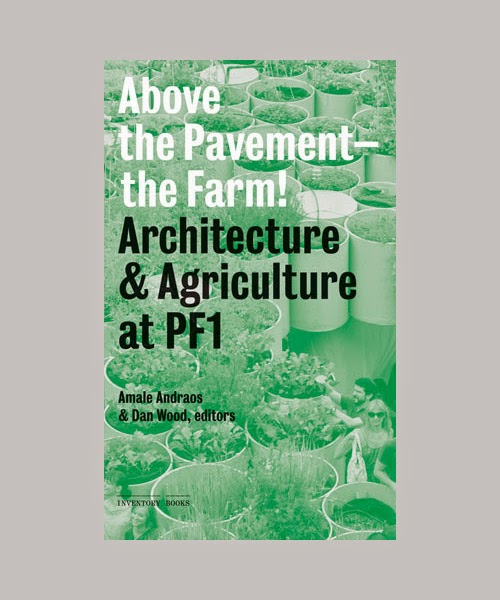 It's been two years since WORKac's winning design in MoMA P.S.1's Young Architects Program (YAP) was constructed at the Long Island City contemporary arts center, but its influence extends beyond its brief tenure in the courtyard. The ninth installation in the ongoing YAP program received lots of press in print and online, and this second installment in the Inventory Books series promises to open the project's blend of architecture and agriculture to an even wider audience. This potential comes about not only from the project's content -- going beyond the usual folly of fun for revelers -- and form -- striking in appearance and construction -- but also the easy-to-digest content (pardon the pun) of the book and the way it is designed.

Public Farm 1, or P.F.1, as WORKac called the project in a spin on the institution's name, was a canted overhead plane built of cardboard tubes filled with lightweight soil and various edible plants and herbs. Raised on a number of columns also of cardboard, the installation engaged the courtyard in one spot with a small pool. This area, and an additional periscope, gave visitors a view of the agricultural products of the summer-long installation; underneath only labels of what occurred above were visible. WORKac's design is notable for using the YAP as an opportunity to explore themes and ideas on a much larger scale than the physical walls of the site and the institution. Many of the previous and subsequent winners focused on form and construction, and while both can be said to be exploratory here (esp. the cardboard tubes), they take a backseat to the focus on small-scale urban farming.

How WORKac and its collaborators went from an invitation to participate in the competition to P.F.1's construction and dismantling is the subject of this pocket-sized book. The voyage is presented as a conversation with the various players, edited from different interviews. One hears the voices of architects and their collaborators in the beginning, who then fade into the background as the builders move to fore, until the architects come back again when the pieces are moved from the shop to the site, crunch time. It can be read easily in one afternoon, thanks to the laid back, conversational tone of the interviews, the small size of the book, and a large font. The main quibble with the layout of the book is how numerous illustrations are tucked "into the fold," making them unintelligible. Otherwise the book is very successful at conveying the ideas of the project, one that probably could not have existed without a book, as its importance is so much greater than one summer in Long Island City.

Note: On Wednesday, June 23 at 6pm is a book launch and panel discussion on Above the Pavement and Fritz Haeg's Edible Estates at the Horticultural Society of New York, 148 West 37th Street, 13th Floor.