Museum of the Moving Image Progress

Cracking open the AIA Guide to New York City's Fifth Edition that arrived in the mail today, I immediately flipped to my 'hood -- Astoria, Queens -- to see what's new and different with the guide. My own guidebook will feature three or four buildings in the area, but only one is featured in the AIA Guide and one other is briefly mentioned under another building. The latter is Leeser Architecture's expansion of the Museum of the Moving Image, something the authors describe "might appear around 2020." Having seen the early stages of construction last year I didn't think another ten years would be needed to finish the addition, yet reading this typo or wisecrack spurred me to stroll over and see how construction is progressing. 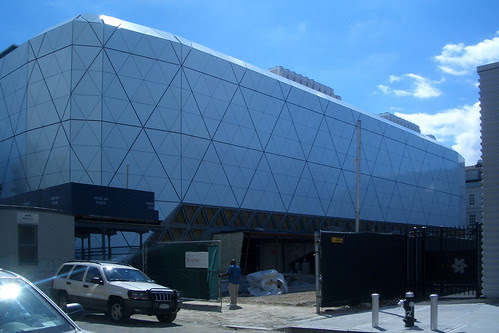 Most of the facade panels have been installed, except for a band above the new Education Center portal (above) and a bay on the northwest corner (below). The expansion is sited at the rear of the existing building, away from 35th Avenue, most likely due to a National Register of Historic Places designation for the museum's home. 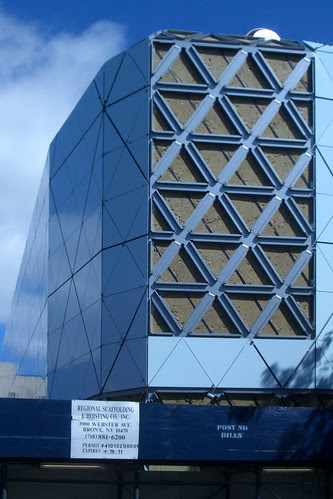 In the top image a corrugated metal building in the right foreground is visible, a production facility for the museum's neighbor, the Kaufman Astoria Studios. Designed by JTDA, the building is missing from Leeser's renderings, making the courtyard appear larger than it will actually be. 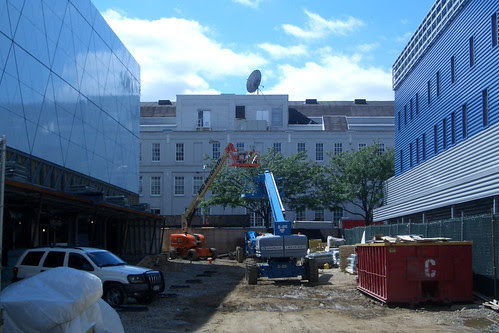 JTDA's design relates to the Leeser addition in scale and color, but it is a whole different type of architecture: functional, uninspired and the result of interior considerations. It is not a good neighbor for Leeser's triangulated facade. Considering the main entry to the museum will take place in this courtyard, more money should have been spent on this elevation of the studio. [Correction: the main entry will be located on 35th Avenue...yet this does not reduce the importance of this outdoor space.] Landscaping may temper this difference, but if Leeser's renderings are any indication it will be minimal. 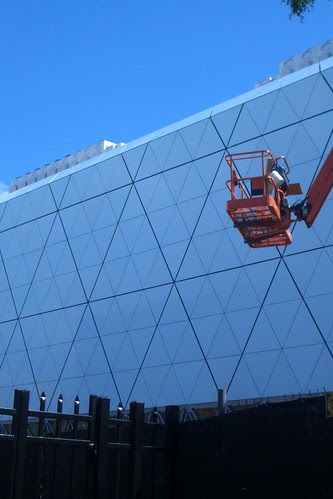 The success of Leeser's design, at least on the exterior, depends on how the light-blue triangular panels will hold up over time. They have a unique quality that is reflective yet muted, changing depending on the angle of perception and time of day. Without reflections (above) the addition appears surreal, so much like the rendering that it is intangible. The reflections make it more ethereal, sometimes disappearing into the blue sky. 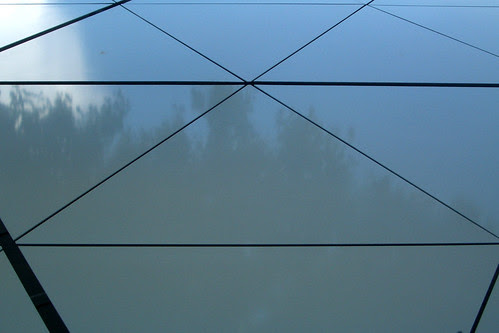 Up close, the facade's construction is exemplary. The deep reveals -- narrow and wide for the small and large grids, respectively -- are aligned almost perfectly, enabling the facade to be read like an abstraction, a supremely flat surface reinforced by the design of the deep reveals. I'm looking forward to the inverse of the facade (to be used for projections of art and such in the lobby spaces) when the building is complete ... I'm guessing nine or ten year's ahead of AIA's schedule!
Email Post