"Book Briefs" are an ongoing series of posts with two- or three-sentence first-hand descriptions of some of the numerous books that make their way into my library. These briefs are not full-blown reviews, but they are a way to share more books worthy of attention than the ones that are reviewed on my daily or weekly pages. 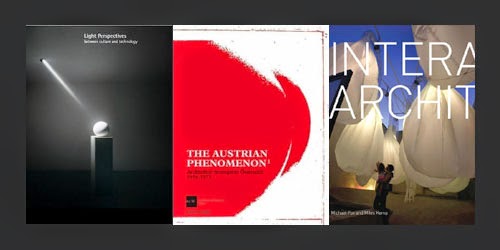 1: Light Perspectives edited by David Kuntzsch | ERCO | 2009 | Amazon
Architectural lighting company ERCO sees themselves as "selling light, not luminaires," and that assertion comes across in this guide to the effects of light, both artificial and natural (though primarily the former). Abundant illustrations aim at giving designers a thorough understanding of the qualities of light, as well as knowledge of different fixtures that allow certain effects to be achieved. Most helpful are renderings that illustrate the sometimes subtle differences between types, placement, and other lighting variables. (Sample chapter PDF)

2: The Austrian Phenomenon by Architekturzentrum Wien | Birkhäuser | 2009 | Amazon
If you're like me, you're a sucker for avant-garde Austrian architecture from the sixties and seventies. Which means if you're like me, you'll want this HUGE book, documenting the important voices in images and words. Coop Himmelb(l)au is here, as is Hans Hollein, HAUS-RUCKER-CO, Raimund Abraham, Walter Pichler, and many, many more (a smattering can be found here). A slim volume collects the texts in English, but the roughly 1,000 pages of drawings, models, and other visual artifacts is the real treat. And as the recent spate of inflatable enclosures shows, everything old really is new again; see where it all began.

3: Interactive Architecture by Michael Fox and Miles Kemp | Princeton Architectural Press | 2009 | Amazon
The authors attempt to present a history of interactive architecture and clarify what exactly it is, especially because it is a phrase easily batted around without recourse to definition. They take the position that true interactivity entails multiple-loop systems "in which one enters into a conversation: a continual and constructive information exchange." Numerous case studies are presented alongside the fairly dense text that delves into some of the technical sides of things, not just the theories behind the projects. 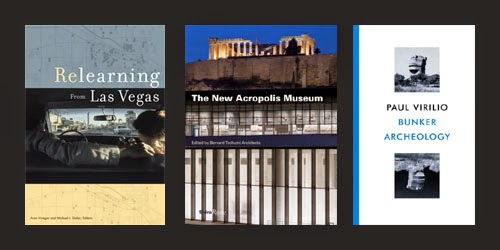 4: Relearning from Las Vegas edited by Aron Vinegar | University of Minnesota Press | 2008 | Amazon
In 2009 I reviewed Aron Vinegar's I AM A MONUMENT, a reconsideration of the highly influential text Learning from Las Vegas. This collection of essays also focuses on that classic 1972 book by Robert Venturi, Denise Scott Brown and Steven Izenour, stemming from a 2003 issue of Visual Language which Vinegar also organized. (His own cottage industry, of sorts?) The essays cover the book's page layout, its relationship to art, and even its relationship to Reyner Banham's book on Los Angeles. Varied but academic throughout.

5: The New Acropolis Museum by Bernard Tschumi Architects | Rizzoli | 2009 | Amazon
The New Acropolis Museum is as controversial for its intent -- creating a place for the return of the Elgin Marbles from the British Museum -- as for its design by Bernard Tschumi Architects, which departs greatly from the Classical architecture of its predecessor. This book argues the appropriateness of the architect's design, documenting the design in drawings, models, and photographs. An architectural timeline from 2000 to the 2009 opening is accompanied by construction photos that illustrate the difficulties in building in Athens.

6: Bunker Archaeology by Paul Virilio | Princeton Architectural Press | 2008 (2nd US ed.) | Amazon
Virilio's now classic book on approximately 1,500 WWII bunkers on the Atlantic Wall was first published in 1975. More than thirty years later his photographs are still powerful, celebrating the form and desolation of the concrete objects, but is is his writings on war that make this book highly recommended. A mix of research, historical interpretation, and philosophizing, the essays are brilliant but highly readable, not esoteric. It makes me want to pick up more by Virilio, an important voice when the militarization of cities is more and more a reality.
Email Post
Labels: book-briefs