Spurred by a comment in a recent post, I rented Atom Egoyan's film Chloe, in which the below house by Teeple Architects plays a small role, among other buildings, in the story. The basic plot (don't worry, no spoilers in this post) involves a married couple--a doctor and professor played by Julianne Moore and Liam Neeson, respectively--and a prostitute (Amanda Seyfried) hired by the wife when she suspects her husband is cheating on her. The prostitute is supposed to flirt with the husband to see if he would be unfaithful with her, but of course things get complicated in ways the viewer may not anticipate. In the film the Heathdale House is the home of Moore, Neeson and their high-school-age son (Max Thieriot). Or is it?

Heathdale House - Teeple Architects, originally uploaded by Scott Norsworthy.
Actually the house just plays the front, giving a suburban context to the three-person family. But the inside is played by the Ravine House by Drew Mandel Design, a house that appears to be in a more rural area (but in reality is down the street), backing obviously onto a ravine. Ravine House's rear is articulated with projecting bays and inside corners, so one can look from one space to another through exterior glass walls. This is illustrated in the film, but the interior displays the same means of oblique views through glass walls and across openings in section. They are complex spaces that reinforce the visual proximity but physical and mental distance between the three family members, but it and the front of the house are just the tip of the iceberg in Egoyan's use of architecture--specifically Toronto's contemporary architecture--in Chloe. 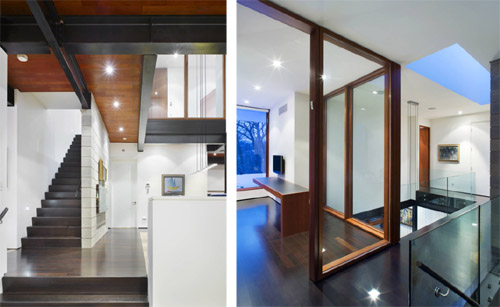 A little bit has been written about Toronto finally starring as itself in a film (this is the first foreign-financed film both set and shot in Toronto), instead of pretending to be New York, Chicago, or even a European city. Torontoist does a good job of running down the various sites that are used in the film, including the two houses above, but also the Royal Conservatory of Music by Kuwabara Payne McKenna Blumberg Architects, the Royal Ontario Museum (ROM) by Daniel Libeskind, the Art Gallery of Ontario (AGO) by Frank Gehry (with Will Alsop's OCAD in the background), as well as a hotel and various bars and restaurants. Many of the above buildings and names echo my review last week of A Guide to Contemporary Architecture in Toronto by Margaret Goodfellow and Phil Goodfellow.

While watching Chloe and recognizing many of the recent buildings portrayed, a few things entered my mind: Toronto is becoming much more cosmopolitan, with iconic buildings helping the city "play itself" instead of standing in for another one; the film acts as an advertisement for Toronto, like booster propaganda, where the quality of life and places is very high; and the use of landmarks in the city--be it a Frank Gehry building or a well-known cafe--does not actively engage the plot, unlike the Ravine House. The last is like a film set in New York City where we see the Empire State Building, Central Park, the Guggenheim, and other places that scream NEW YORK (I can't think of a particular film at the moment, but I'm sure there are many) but don't use the city as more than a backdrop. How does the AGO/OCAD setting relate to the phone call happening when Chloe is on that corner? Unfortunately I'm at a loss to say. Regardless, I liked the film a lot.
Email Post