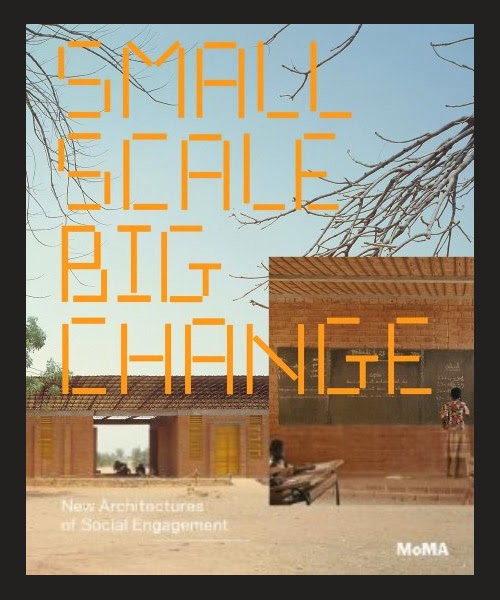 MoMA's current architecture exhibition, Small Scale, Big Change, presents "eleven building projects on five continents that bring innovative architecture to underserved communities." It follows on the heels of Rising Currents, which tackled global climate change via five projects for New York Harbor. We'll have to wait until next summer, after Barry Bergdoll raids the collection once again, to see if this trend of environmental and social awareness continues. Yet if MoMA Director Glenn D. Lowry's sometimes defensive foreword to the book accompanying curator Andres Lepik's exhibition is any indication, that awareness has been ever-present, but clearly not something that drives the museum's programming.

In terms of architecture this engagement is a reflection of the belief in modernism as a movement geared towards social betterment, true for a fraction of its practitioners, most overtly in its earlier phases. Certainly some architects did focus on social and environmental concerns as postmodernism asserted architecture's formal dominance over what were seen as irrelevant issues (or at least issues that couldn't be solved with architecture), but the 21st century's rapid urbanization and climate change are the other side of the contemporary architecture coin with starchitect-driven formalism. In other words architects see themselves as socially and environmentally responsible again, and MoMA is reflecting that in its exhibitions.

Instead of being housed in the architecture department's usual digs, the exhibition is in the 1964 east wing designed by Philip Johnson. (One side of the exhibition space looks onto 53rd Street through that building's distinctive windows, and the opposite side overlooks the sculpture garden through the glass wall of Yoshio Taniguchi's 2004 expansion/renovation.) The main access to the space is via a long corridor with a map opposite the glass wall's veiled view to the sculpture garden (above). This hyper-stylized map locates the eleven projects in a zone that wraps the equator, from 34 degrees to -23 degrees latitude; visually this appears to coincide with architect Teddy Cruz's Political Equator. Stats are presented for each project, but unfortunately they are not comparative; the number of "untrained laborers [who] built the [Meti-Handmade School] with the assistance of 4 water buffalo" doesn't equate with what the 93 families paid for house and land in Chile's Quinta Monroy Housing. Certainly this situation arises from the variety of locales, project types, and sizes of the architecture chosen for the exhibition, as well as from today's emphasis on individuality over just about anything else.

Inside the exhibition each project is presented with a large-scale photograph or rendering alongside a description, some sketches and other design documentation, and models. Typically the accompanying book expands upon the text and photographs, but unfortunately model photos aren't included in its pages. Watching the fairly large crowd (for a weekday) move about the exhibition -- laid out simply and openly with blue walls and tables on sawhorses -- the models were the most studied and photographed. They ranged from site models to large-scale sectional models, while some integrated 3d and 2d media to create more interactive pieces (Elemental, photo below).

Of the eleven projects, all but three are realized to some degree, though I wish they all were. I think the theme of "big change" isn't limited to intentions, it should include on-the-ground results via the admittedly dry documentation/evaluation of a project's success. Featuring projects in-progress allows Teddy Cruz to be included; an exhibition on social change in architecture would probably be seen as incomplete without him. Other widely disseminated contributors and projects include Elemental's housing in Chile, Alabama's Rural Studio, the Primary School in Burkina Faso, Meti-Handmade School in Bangladesh, and Red Location Museum in South Africa. (The last three were featured on my weekly page, I guess a barometer of sorts for their popularity.) Some critiques (collected here, midway down the list) point out that a dozen more projects were in the running for inclusion in the exhibition. It would be great to know what those are, but I can think of many more than twelve, not all as photogenic as the eleven that made the cut, as I noted here.

I tend to agree with critiques of the show's lack of cohesion/conclusion and still overriding aesthetics over ethics approach, yet I think the general audience that will be be the majority viewing the exhibition downplays such rigorous and nuanced takes. Nevertheless just how change is defined -- or rather isn't defined -- in the show may be its biggest weak point. At least, people will realize that there is more to contemporary architecture than Frank Gehry, the flashy buildings adjacent to the High Line, and that exists in places all over the globe, even though they might not be convinced that architecture can still solve today's major societal problems.

It should be noted that tucked away at the sculpture-garden end of the exhibition are computer kiosks presenting three networks, the "internet-based architecture communities" The 1%, Open Architecture Network, and urbaninform. Unfortunately the layout is an afterthought and their contribution to the exhibition is minimal at best, but in the online companion their inclusion should have a stronger "second life."

In essence Small Scale, Big Change is an exhibition in three parts: gallery space, web page, and book, from most to least ephemeral, if you will. The exhibition will come down in January, the web page will be online longer but is fleeting as digital bits and bytes are, and the book is a well done artifact that lengthens the text as it reduces the visual information provided. One is not a perfect mirror of the others, but each basically gets across the unique and important aspects of each project. In addition to the documentation of the eleven projects, the book includes essays by Barry Bergdoll and Andres Lepik. The latter discusses the different strategies (materiality, construction, etc.) found in the exhibited designs, but he extends the reach to include other related projects. Nevertheless there is an importance levied upon the eleven projects -- that these are the ultimate examples of architecture for social change --  that is a bit disconcerting. These projects are not standalone designs, like art hung on the walls, but parts of larger and more complex contexts that offer other examples of tackling social change via building, examples not even referenced. Enter the three networks and their ability to extend the conversation MoMA joins into with Small Scale, Big Change.