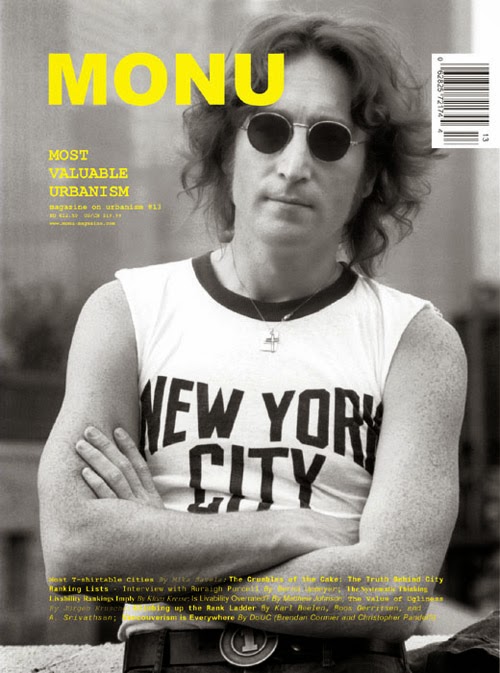 In my inbox this morning was an email with a link to the results of the MAS Survey on Livability, which asked New Yorkers to respond to questions about their happiness with living in the city and with its different qualities (cleanliness, schools, police, shopping, etc.). This survey is one among what must be hundreds of similar ones that range from examining a city in particular to comparing cities on national and international scales; Forbes has a list of America's Most Livable Cities, Mercer leads an international survey, as does The Economist. Each survey has its own reason for being and corresponding criteria to make judgments, but the overall impression of the quantification of subjective personal experiences is that cities should strive to for being number one, that those on top are safer, cleaner, prettier, better places to live than the rest.

In the 13th issue of the Rotterdam-based Magazine on Urbanism (MONU) those livability surveys, or more generally indicators of quality of life in cities, are the focus. For the most part the results of them are contested. Who is to say that the scale of livability used by a survey corresponds with residents' own experiences? An interview with Raleigh Purcell by the magazine's editor Bernd Upmeyer reveals The Economist's survey linked above to be geared towards expat relocation, existing to help businesses determine how much employees living overseas should be compensated for any hardships of their new city. So the criteria follow from their stakeholders' concerns and therefore could hardly be thought of as comprehensive, even though those cities at the top of the list may tout the results as such. What about Houston? It's not found on Mercer's top 50, but Matthew Johnson argues that its qualities (diversity arising from its famous lack of zoning, the city as a non-hierarchical field that emphasizes the qualities of specific places over a broader urban plan, etc.) just aren't found in the surveys. But those qualities equal a fast pace of growth and a general happiness of residents ("bad place to visit, but a great place to live"), two signs of livability. Other essays in these pages run counter to the indices generated by the well known surveys. Some are especially creative, such as Melissa Dittmer and Amy Bos's Cosmo-esque quiz for "post industrial's most valuable urbanism," Bobby Shen's assemblage of tweets about the Mercer survey, and John Southern's pointed stab at the gentrification and homogenization that these lists secondarily promote.

Overall I was impressed with how the contributions followed the theme, and how they did so in some quite diverse ways. It's far too easy to establish a theme but then veer from it to include big names that might sell issues. Here the various essays tackle the topic from all sides, not aiming for consensus but for a presentation of what's missing in the lists. The surveys may have as much influence on our daily lives as sunspots -- they happen, yet we're not aware of them -- but they certainly play a part in today's hyper-competitive global urban marketplace of business, tourism, and everything else; the surveys therefore impact the policies that do affect us. It's a topic ripe for attack, so I'm glad MONU has set its sights on the marketing of livability. Next up for them is "Editing Urbanism" or a shift from new buildings and quarters to "processes of selecting, correcting, condensating, organizing, or modifying the exitisting urban material." The call for submissions is open until December 31, 2010.
Email Post
Labels: book-review monu