Agenda: Can We Sustain Our Ability to Crisis? by JDS Architects
Actar, 2010
Paperback, 544 pages

So in 2011, with Kindle, the iPad, and architecture blogs, among other game-changing pieces of computer technology spreading information, what is the state of the architectural monograph? Are they evolving in response to new ways of reading? Are they scaling down as people learn about architecture online? Are they providing content different from the traditional monograph? These four books from 2010 embody the diversity of the genre, featuring architects and landscape architects from the United States, Europe, and Asia. They also map different approaches to monographs, ones which are dependent upon the format being in print to varying degrees. 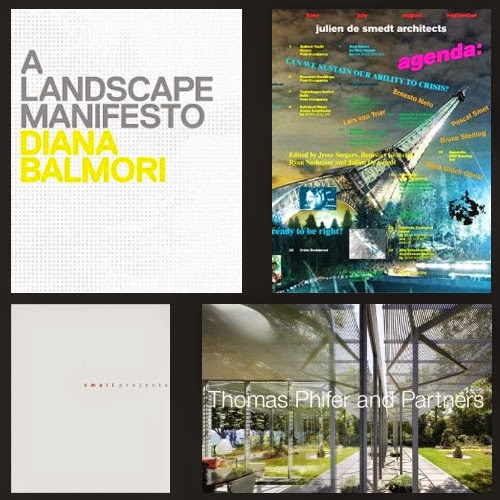 The Manifesto. Instead of a formal presentation of built and unrealized projects, as most architectural monographs are wont to do, Diana Balmori opts for a manifesto, 25 points toward "a new definition of landscape, bringing together ideas from biology, evolutionary theory, and ecology." These 25 statements veer from observations ("Emerging landscapes are becoming brand-new actors on the political stage.") to suggestions ("We must put the twenty-first-century city in nature rather than put nature in the city."). Some points are fairly obvious, and others don't seem to take a strong enough stance, but their sum total is what is important; they encapsulate a direction that thinking about landscape and the city needs to take in order to make attempts at sustainability more beneficial. How we relate to nature is at the core of the manifesto, and how that point of view affects the design of landscapes is the focus of Balmori's projects that are interspersed amongst the explications of the 25 points.

In design the book does not veer greatly from traditional monographs, except it is structured around the 25 points, rendered in large type on a gray background, like signposts along the journey through the book. The project illustrations basically float on the pages in between, making the captions extremely important, since ideas and themes set up the format, not the projects themselves.

The Diary. Belgium-born Julian de Smedt was one half of PLOT, with Bjarke Ingels, who went on to form BIG and presented his work in the form of an archicomic. This monograph on JDS Architects similarly veers from conventional monographs, but it is more in line with OMA/AMO's Content from 2004: both use lightweight, magazine-quality paper, are interspersed with the occasional advertisement bringing the cover price down a bit, and a bold graphic design that layers information. In this case a timeline -- the year in the life of JDS that starts with the bankruptcy of Lehman Brothers in September 2008 and structures the book -- runs along the top of most pages, intersecting with projects, interviews, essays, critiques, and other content below. As the book's title suggests, and the start of the timeline reiterates, responses to crisis permeate the book. Occasionally JDS asserts that the economic crisis passed without any structural change or taking advantage of the opportunity, but two years later, regardless of optimistic assertions, the crisis has hardly passed. And the potential for change arising from these difficulties has not passed.

A project that occupies the greatest real estate on these pages is the Holmenkollen Ski Jump, which recently opened in Oslo, Norway for the FIS Nordic World Ski Championship. (There is even an app for the ski jump!) It is one of the few post-PLOT projects to be realized, and its scale and design are impressive. It's one of those projects that has the potential to make the designer known, just like his old partner at PLOT.

The Sole Practitioner. Kevin Mark Low's smallprojects was featured on this blog back in 2008, showing Low's adeptness at tackling everything from a house to the kitchen sink...or at least the dish rack above the sink. Needless to say the Malaysia-based architect's rigor and sense of craft are impressive, making for a consistent body of work, even as he makes the jump in scale to office buildings. Low is reminiscent of Australia's Glenn Murcutt, who works alone yet has built on a larger scale with an associate architect, and Kansas' Dan Rockhill, another sole practitioner who actually does fabricate the kitchen sink, as well as the gutters and just about everything else on his residential commissions. Low's sense of craft and control extends to this monograph, which he also designed and set, dealing with everything from fonts to page size and layout.  Additionally the majority of the photographs are by the architect. It is an extension of a sole practitioner, an expression of his design sense, not just a presentation of his architecture. In addition to the extremely thorough documentation of 25 projects, a few essays by Low are included and appendices with academic and professional work before starting smallprojects. The text accompanying the projects is as thorough as the photos, drawings, and sketches, including the captions, which tell a story in and of themselves.

The tactile quality of this monograph should be noted. From its gray linen cover to the matte, lightly texture pages, the experience of moving from page to page is well considered. The paper type does mean that the images have strong blacks and whites with a fairly flat zone in between, but this hardly detracts from the photos; instead it fits with Low's designs that embrace the myriad textures of life.

The Art Book. Equally well considered and crafted as smallprojects, this monograph on New York City-based Thomas Phifer and Partners is also the opposite in many ways: glossy instead of matte, minimal in layout, reduced in terms of information given. After a title page and photo of the office, the projects start; no introduction, no filler. This minimalism extends to the rest of the book: no captions, no page numbers, a couple essays interspersed among the projects and photos. Flipping through the pages is like looking at an art book, where each photograph (most by Scott Frances, never more than one per page, and in a couple instances actually stretching over three pages in pullouts) becomes the focus, in some cases over the architecture. This is no more true than in the photos of the recently completed North Carolina Museum of Art, because the people in some of Frances' photos look Photoshopped. While they're probably not post-production effects, while their saturation and blend of crisp and blurry figures is most likely a technical feat worth appreciating, and while I've lamented the lack of people in architectural photography in the past (please take my word on that, as I can't find that blog post right now), the surreal, rendering-like quality detracts from the architectural design.

To aid in understanding the buildings and projects (most are completed, but a few in-progress designs are included) some plans and sections are included in the rear of the book, equally minimal (no labels, no scale, etc.) and at a safe remove from the photos that make up the bulk of the book. But like Low's monograph, the presentation suits Phifer's buildings to a T. His light and crisp Modernism requires an ascetic life as much a presentation (photos, book, even his web page) free of clutter. Maybe this is why the people in the North Carolina Museum of Art photos are so unsettling.