Museum of the Moving Image 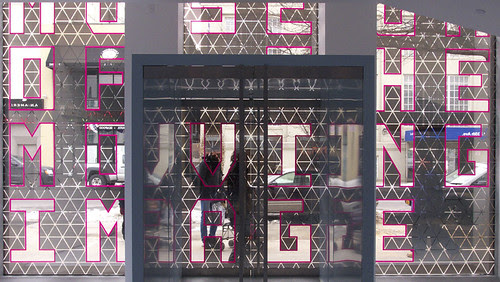 The Museum of the Moving Image reopens on Saturday, January 15, after doubling its space in an expansion by Leeser Architecture. For some background on the design, check out my weekly dose on the project and a blog post on its exterior addition. Much attention on the design, here and elsewhere, has focused on the triangular metal panels of the rear addition, but it's clear from a visit on the occasion of a press preview that it's all about the interior. Below is a photo tour of the addition/renovation, mostly of the inside, since the rear addition and courtyard won't be complete until the Spring. 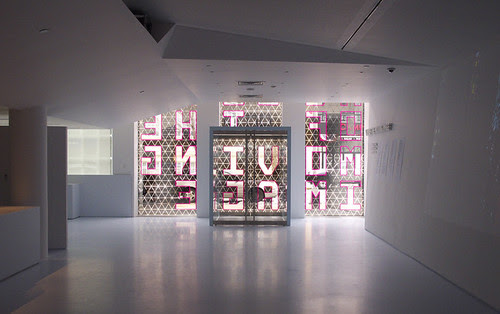 The museum is located on 35th Avenue, spanning from 36th Street to 37th Street, with the main entrance halfway down the block on 35th. Since the existing building is a protected landmark, the entry design is minimal, three bays of storefront in the old facade with small triangles of mirrored glass and the museum's name written in clear glass outlined with bright pink lines. In reality the glass is all the same, but a film applied to it creates the various effects of translucency and transparency. (The top photo is actually from inside the lobby, flipped so the name of the museum can be read.) 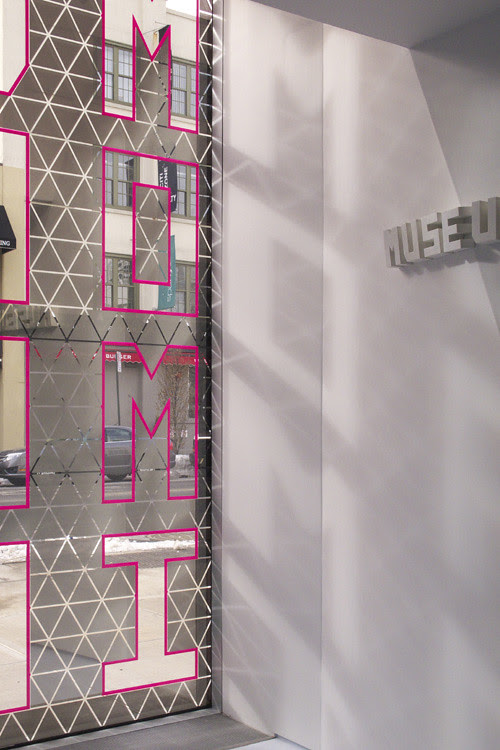 This first interaction with the building may seem like applique, yet it fits in with the rest of the design, not just because it is composed of triangles but because it is one of a number of ways the architecture tries to relate to film, one of the media that is the museum's focus. Here notions of sight and reality are brought to the fore, a complex plane of glass the visitor breaks through by entering the museum. 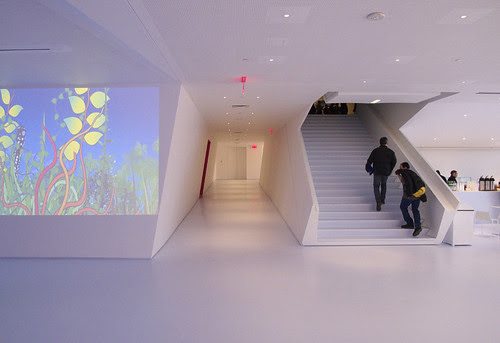 As the second email illustrates, just steps within the front door, angles predominate. The walls angle back in section and in plan, the ceiling follows roughly perpendicular, slipping past a ceiling sloping another direction.  A video installation is projected on the long wall opposite the gift shop and ticketing; the wall's subtle angle seems to highlight it as something special, something to be looked at (a long canvas) not just stood in front of. This wall leads back to the cafe that overlooks the courtyard (still under construction) and access to the main areas of the building: the galleries (up the stair above), the main theater (behind the photo), and the education area (down the corridor in the middle of the photo). In effect the building on the first floor is a double-loaded corridor, extending from the front door to the rear courtyard with the program spaces flanking on both sides. It is a simple parti activated spatially by the angled walls. 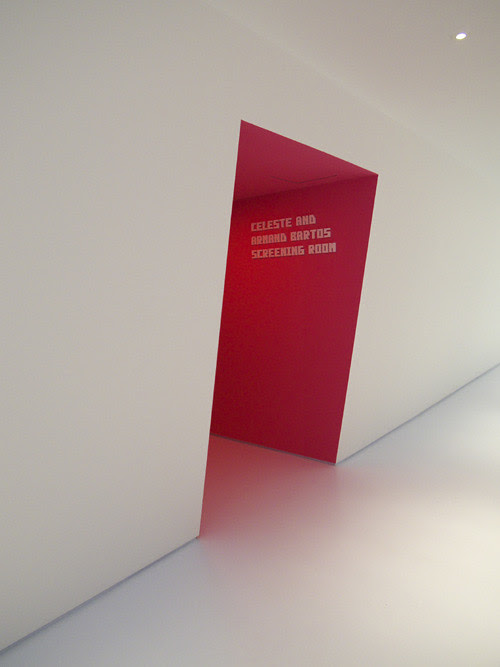 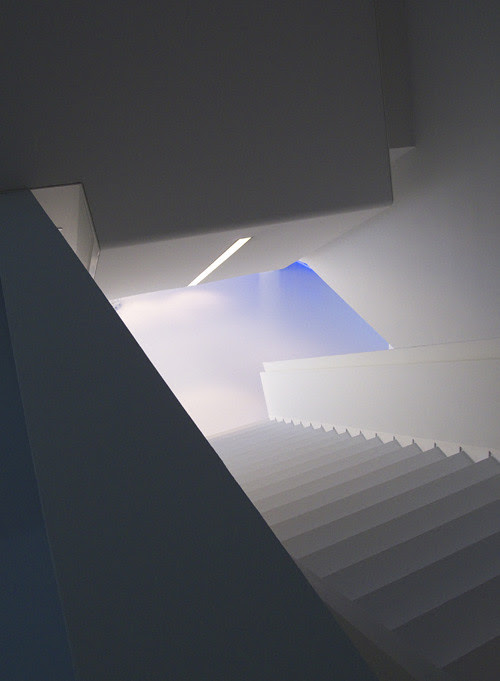 Access to the galleries is via the centrally located stair with a gentle rise that brings visitors to a gallery/screening area with a ramp that zigzags between benches (left in below photo). This is a stopover between the lobby and the two types of galleries: permanent and temporary; the former occupies two floors in the existing building and the latter is on the third floor, up the stairs in the below photo. At the moment this second floor space is home to a film and installation by artist Martha Colburn, occupying the opposite walls of the long space. There is great potential in this space, and future commissions will no doubt exploit this. 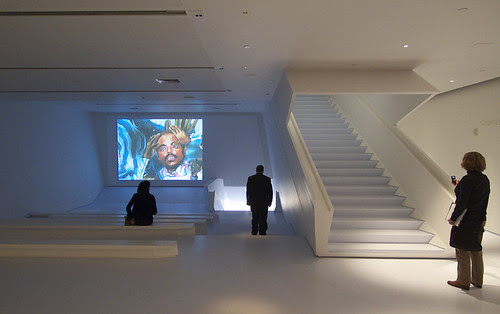 Like the main entrance, the stair from the second floor to the third floor is articulated like a portal, with the walls apparently cut from a solid container. The contrast when entering the dark space upstairs is jarring. The first exhibition in the museum's gallery for changing exhibitions is Real Virtuality, six installations that "create simulated worlds that extend, augment, or disrupt the physical environment of the museum space." 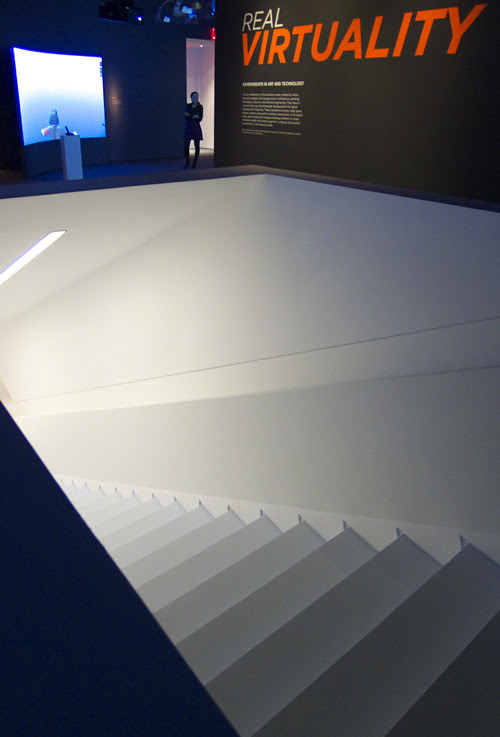 One of the six installations (below) is RealTime Unreal by Belgium's Workspace Unlimited. Visitors don 3-d goggles and immerse themselves, visually and physically, in a virtual model of the museum that turns, breaks, and reconfigures itself in relation to the visitor's movement around the screen. The planes of the digital environment overlap with the surrounding reality as live video is fed into the model. More than one person can occupy the space around the screen, but only one person at a time "drives" the interaction with the virtual model, something that needs to be experienced to be appreciated. 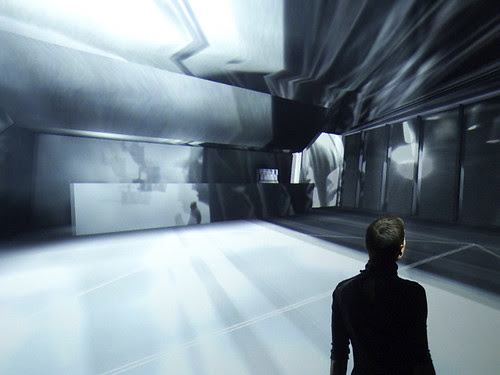 Back downstairs in the lobby, opposite the stair to the galleries is a blue portal that leads to the main theater, below. Both the floor and ceiling in this area slope, the latter as the underside of the theater.This ramp gives the impression that the space is cutout from the white container, so inside is blue; it also looks very sci-fi, as if it is an entrance to a spaceship. The first impression though is fairly accurate, since the inside of the theater is lined with the same "Yves Klein blue." 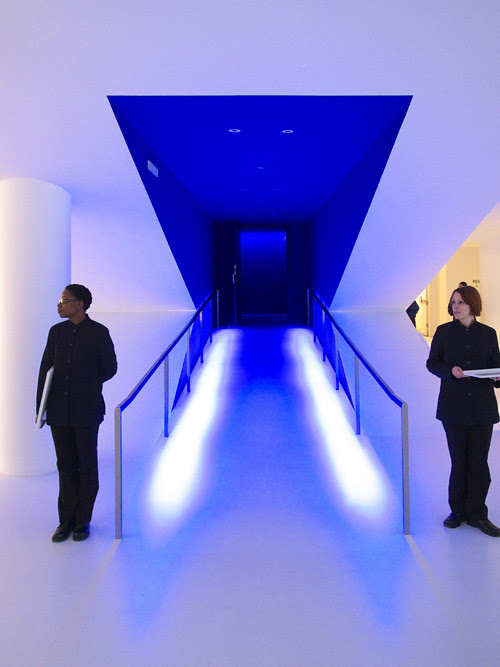 Of the new spaces the main theater is easily the highlight. Over 1,000 triangular panels cover the walls and ceiling. They are composed like the exterior addition (last two photos) into larger triangular areas. Here they curve to follow the space but also peel away for lighting and other fixtures, since the theater is set up for performances as well as film screenings. 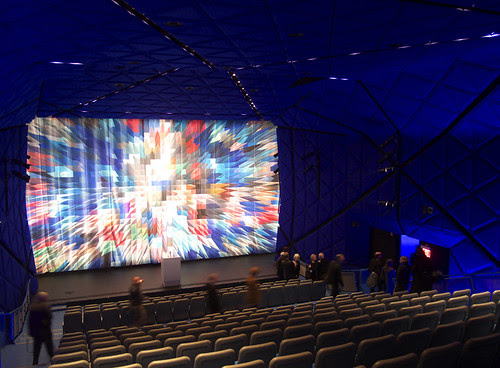 The curtain by Cindy Sirko is a perfect foil to the blue panels. Color seems to leap from the fabric towards the audience, radiating from the center. Below, architect Thomas Leeser gave a few words to the press, though he admitted that with the building (basically) done he didn't have to say much, the architecture could speak for itself. 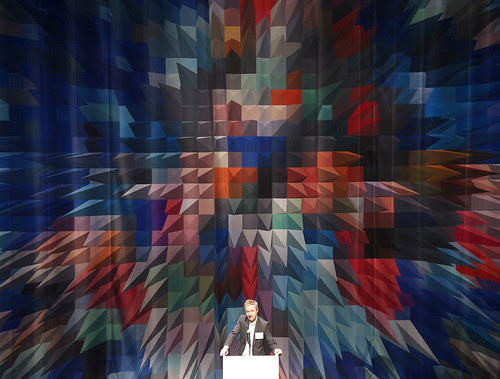 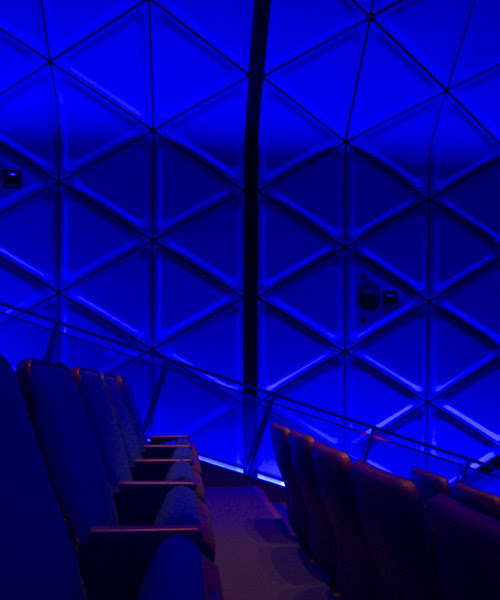 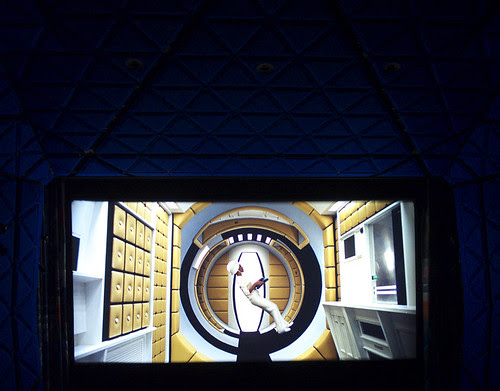 Just as entry into the theater is like entering some unique sort of world, leaving it is a slow acclimation in reverse, back to the museum's white walls. Yet these spaces with video projections, splashes of color, and angled walls aren't completely overwhelming. It as if a visit to the museum is an adventure, a respite from "reality," an immersion into the world of film and other moving images. So once inside the spaces are varying degrees of reality, immateriality, image, and so forth. It's a carefully controlled series of spaces that work together fairly seamlessly without being repetitive or direct in cinematic references. It's a great start to 2011 in New York City. 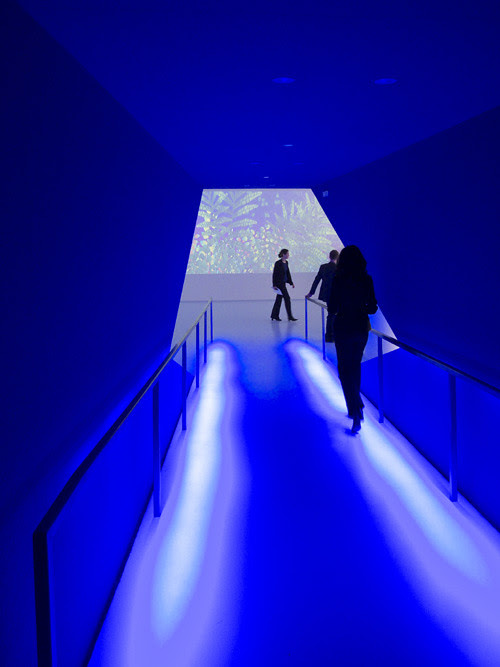 Outside, the light blue triangular metal panels now seem subdued, especially relative to the main theater. The addition's opposition to the existing facades is still striking, but it can be read as a solid wrapper to the interior spaces free of natural light. Their geometric regularity recalls a wireframe, as if the elevations are a canvas for something else, perhaps a metaphor for the production of moving images in digital environments. 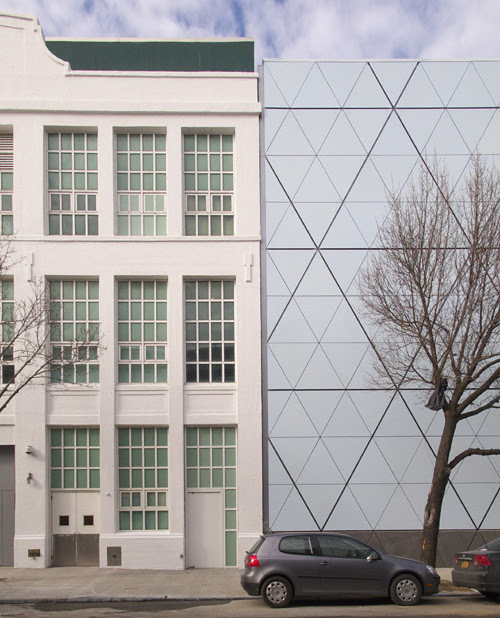 When the courtyard is complete in the Spring an outdoor theater will accompany the three spaces inside the museum. (The slope in the bottom right corner of the last photo is the rake of the seating, with the screen to be installed perpendicular to the facade.) A light blue artificial turf will echo the metal panels and tie it to the floor inside. 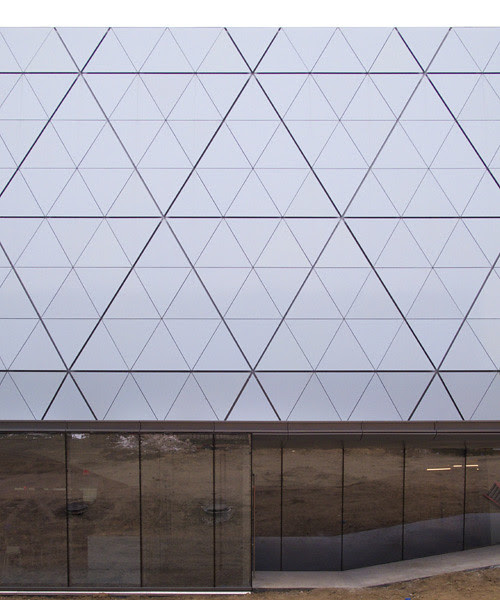 Behind this last photo is a new facility for the Kaufman Astoria Studios, what I thought was an unfortunate situation architecturally when I saw it initially. Yet earlier tonight I learned that their presence on both sides of 36th Street has led them to work with the Department of City Planning towards decommissioning the one-block stretch of the street north of 35th Avenue. The plan is to use the street as a lot for the studio, to film exterior scenes for movies and television, like a Hollywood backlot. If this happens, it would be great for the museum as well, knitting it with the Studios into a two-block campus of sorts for making and celebrating the moving image. What better way to visit the Museum of the Moving Image than to see filmmaking in action?
Email Post