"Holding Pattern" is Interboro Partners' winning design for MoMA PS1's Young Architects Program, to be built this summer in the courtyard of the Long Island City arts institution. The installation will follow on the heels of the redesigned entry to the courtyard, designed by Andrew Berman and set to be done at the end of May. For the inaugural YAP at MAXXI in Rome, the winner is stARTT, with "WHATAMI." 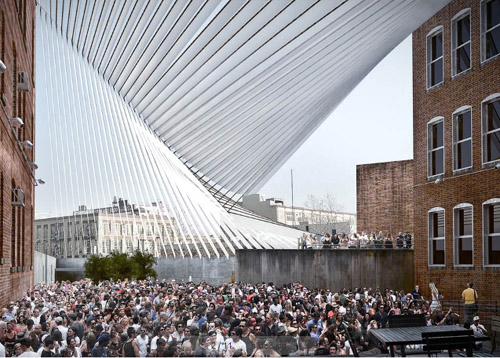 Interboro describes their design as such:


"Holding Pattern" is the product of a sustained dialog with MoMA PS1's courtyard and its neighbors. Instead of telling it what it should be, we patiently listened to what it and its neighbors had to say, then responded in kind. The result of this dialog is a scheme doesn't so much redesign the courtyard as reveal it.

Thanks to its neighbor, 2201 Jackson Avenue, which managed to muscle its way into MoMA PS1's courtyard, and to Jackson Avenue itself, which chopped off the block's southwestern corner, Warm Up has had to make do with a very odd, idiosyncratic space. [...] But as the best baseball stadiums demonstrate, having to make do with less-than-ideal conditions can yield positive outcomes.

"Holding Pattern" reveals this situation by stringing ropes from holes in MoMA PS1's concrete wall to the parapet across the courtyard. In the same way that Hugh Ferris reveals the potential of New York City's 1916 zoning code by drawing the theoretical building envelope, we reveal the very odd, idiosyncratic space of the courtyard and simultaneously create an inexpensive and column-free space for the activity below. From the ground, the experience is of a soaring hyperboloid surface.

From certain angles their design appears to be one of the first winning designs to successfully address the large scale of the courtyard. At other angles the ropes seem to disappear. The effectiveness of the completed installation will rest in what is attached to the ropes (it looks like fabric in the renderings), giving the overhead structure a planar effect that will contribute to cooling. Regardless, at first glance I'm excited about this year's YAP in LIC.