Aggregations, or modular elements assembled into a whole, are fairly recent in their articulation as architectural elements. These differ from traditional modular elements like brick, in that aggregations limit one object to a means of making space; they do not combine with adjacent assemblies. I'm prompted to write about this after two projects hitting my inbox exhibited this trend, but Aranda\Lasch's Grotto unbuilt proposal for MoMA PS1 immediately comes to mind as an earlier example, now six years old. As is the case with this AE series, I'm sure there are earlier examples of this "element," but the formation of space in this manner, with repetitive or parametric building blocks, seems to be a recent phenomenon. 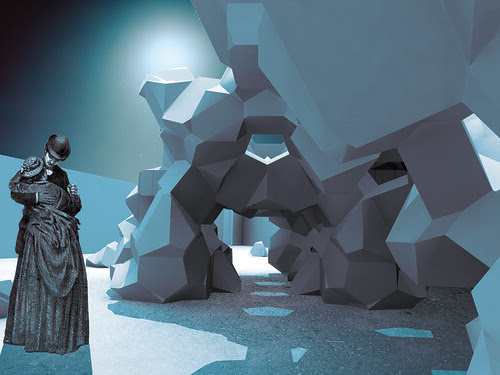 Grotto uses four "modular boulders" of polystyrene to create intimate spaces in the museum's courtyard. The four shapes allow the eventual form to be somewhat unpredictable -- it looks as if it could be made up on site -- and very organic in appearance. The cave-like spaces would have shaded and cooled revelers in the summer of 2005. Aranda\Lasch certainly has a thing for aggregations, even having an exhibit of the same name take place in Miami in 2008.

One of the inbox projects is The Social Cave by Columbia GSAPP's Non Lineal Solutions Unit (NSU), their contribution to this year's Salone Milan Furniture Fair. It is "a parametric aggregation of 100% recycled and 100% recyclable foam cubes" that merge the physical and the virtual to ask, "how can design affect the changing vista of socialization?"

Two distinct spaces are found within the cave, each with a virtual "shadow" tracing movements of people in the other space, people otherwise unseen. So individuals interact via the digital projections, meeting virtually before they meet face to face. Here again the aggregation of units leads to a primordial reference; unlike something appearing contemporary, a cave-like construction is mute in the face of the digital aspects of the piece.

The other inbox project is a sound installation by Zimoun with architect Hannes Zweifel, on display at the National Contemporary Art Museum MNAC in Bucharest, Romania until June 12. Here the aggregator, if you will, is cardboard; 2,000 pieces actually, notched together into something massive that belies the fact it is made from planar elements. It also comes close to being a cave-like space, yet open on top to allow the interior sounds (worth a listen via the video below) to carry.