"Book Briefs" are an ongoing series of posts with two- or three-sentence first-hand descriptions of some of the numerous books that make their way into my library. These briefs are not full-blown reviews, but they are a way to share more books worthy of attention than can find their way into reviews on my daily or weekly pages. 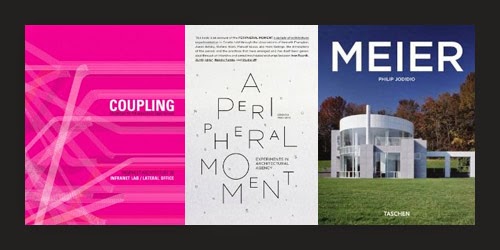 1: Pamphlet Architecture 30: Coupling: Strategies for Infrastructural Opportunism by InfraNet Lab / Lateral Office | Princeton Architectural Press | 2011 | Amazon
The 30th book in the Pamphlet Architecture series collects six infrastructural projects by InfraNet Lab ("a research collective probing the spatial byproducts of contemporary resource logistics") and Lateral Office (founded by Lola Sheppard and Mason White in 2003). Five essays by the likes of Charles Waldheim and Keller Easterling are interspersed among the projects; gone are the days when pamphlets presented a single project by a single voice. The projects, ranging from the Salton Sea to the Arctic are beautifully presented.

2: A Peripheral Moment: Experiments in architectural agency. Croatia 1990-2010 edited by Ivan Rupnik | Actar | 2011 | Amazon
This collection presents recent work by four architecture practice in Croatia -- 3LHD, Njiric+, Randic-Turato, and STUDIO UP -- alongside observations by Kenneth Frampton, Aaron Betsky, Stefano Boeri, and others. The book works like four intertwining monographs, where the ordering of projects prizes theme over any particular practice. The book ends with discussions of and between the architects. The book is a great snapshot of a time of dense architectural experimentation.

3: Richard Meier by Philip Jodidio | Taschen | 2009 | Amazon
Subtitled "White is the Light," this pamphlet-sized monograph (96 pages) features 21 of Meier's distinctive projects, from 1967's Smith House to the Perry and Charles Street towers completed last decade. Given the size of the book and the number of projects, content on each is short, with a couple paragraphs of text alongside a few photos and the occasional floor plan. Jodidio's relatively lengthy introduction covers the evolution of Meier's architecture in the time frame of the projects presented. 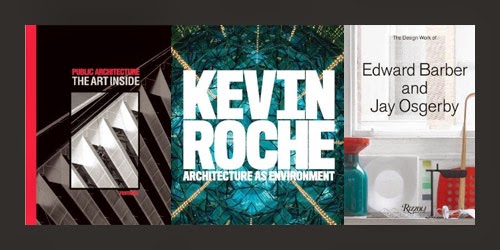 4: Public Architecture: The Art Inside by Curtis Fentress and Mary Voelz Chandler | ORO Editions | 2011 | Amazon
This monograph on Fentress Architects is told in words of Curtis Fentress "in conversation with Mary Voelz Chandler," making it a conversational journey through the architect's numerous buildings. The projects in this rather big book are structured in chapters on various building types: airports, convention centers, museums, commercial, community, civic + government, courts, education + laboratories. At the end of each chapter is an essay relevant to the preceding projects but often rooted in art more than architecture; acknowledgments of inspiration alongside his architecture.

5: Kevin Roche: Architecture as Environment edited by Eeva-Liisa Pelkonen | Yale University Press | 2011 | Amazon
This retrospective on the career of Kevin Roche accompanies an exhibition of the same name, held at the Yale School of Architecture, which also organized a symposium around the architect. It presents a portfolio of five decades of architectural production, but the bulk of the book is devoted to four essays on his architecture, including one by the editor that shares the subtitle of the book. Relative to Roche, the phrase "architecture as environment" makes me think of the masterful Ford Foundation in Midtown Manhattan; the atrium's modernism softened by lush landscaping is a good precedent for green architecture today, an urban greenhouse unlike any other.

6: BarberOsgerby by Edward Barber and Jay Osgerby | Rizzoli | 2011 | Amazon
Edward Barber and Jay Osbergy run an admittedly multidisciplinary practice, combining art and design in projects ranging from industrial design to pieces of buildings. Most of their output, or at least what jumps off the pages of this coffee table book, falls in the realm of furniture. It's hard to pinpoint an overriding thread or approach in their work, as it is simple yet diverse, as if each problem deserves its own unique solution. The Filo Sofa is probably my favorite piece of furniture by the duo; a simple wooden frame is draped with quilts, becoming what they call "a deconstruction of the traditional sofa."
Email Post
Labels: book-briefs