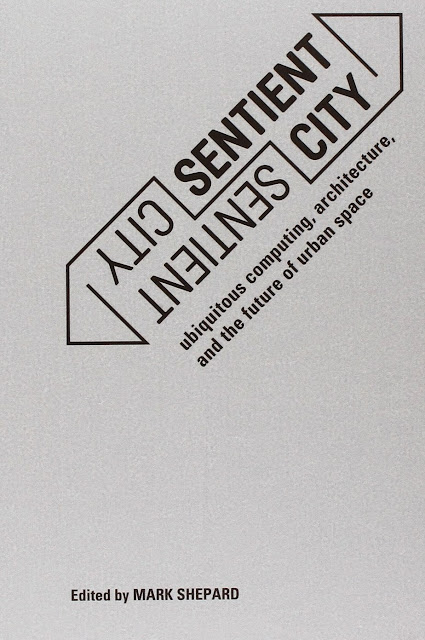 In 2009 the Architectural League of New York held the exhibition Towards the Sentient City, which asserted that "a vast and mostly invisible layer of technology is being embedded into the world around us...[so] buildings and cities are being transformed, imbued with the capacity to sense, record, process, transmit, and respond to information and activity taking place within and around them." The exhibition consisted of five commissions selected and developed for the exhibition, and they make up the majority of this book. In the gallery the projects were most effective when their physicality exuded the technology and ideas behind them. So the Too Smart Trashcan and Bench made more of an impression than the Breakout! office, but in book form each project is able to convey the process as well. This means that the book is aimed at other architects, designers, and engineers interested in the intersection of architecture and technology, and that the intangibles come to the fore as much as the "reality" of their physical results. Each presentation is thorough with a good deal of text and visuals explaining the projects.

Following the case studies are essays by a number of critical essays "on the larger implications of ubiquitous computing...[on] architecture in general and the design of urban space in particular." Some essays look at the commissions (Dan Hill's review, in particular), but most of them use the theme to explore avenues not directly considered in the commissions, be they snapshots of ongoing projects or attempts to situate the exhibition and book in a theoretical framework. I contributed a similar piece to eVolo #3, and while my look at ubiquitous computing and the city was fairly superficial (looking at the malleable appearance of facades with embedded technology), I think that the visibility of ubiquitous computing is an important hurdle that needs to happen for a greater understanding of it. Towards a Sentient City and this accompanying book (and the League's Situated Technologies series) take a step towards that by illustrating the projects and the processes behind them, illuminating the potential in technology's integration with architecture and urban space.