Today the BMW Guggenheim Lab officially opened on a vacant lot in New York's East Village, just east of 2nd Avenue, spanning from Houston Street to 1st Street. The mobile laboratory designed by Japan's Atelier Bow-Wow will hold around 100 events between now and mid-October, then moving on to Berlin and Mumbai, with two other pavilions following in six more cities in the next six years. The main idea is "the exploration of new ideas, experimentation, and ultimately the creation of forward-thinking solutions for city life." Further, "The theme of the Lab’s first two-year cycle is Confronting Comfort—exploring notions of individual and collective comfort and the urgent need for environmental and social responsibility." See the bottom of this post for highlights of some of the upcoming programs that respond to this theme. 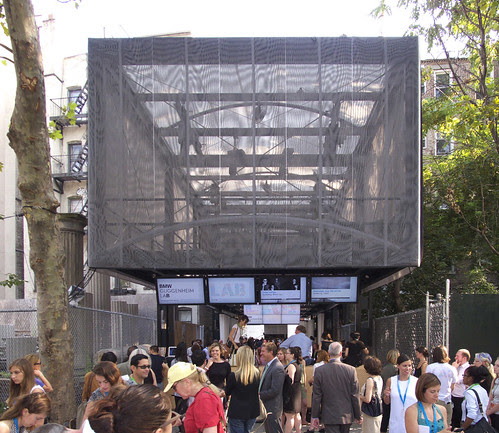 My crude site plan below shows the T-shaped site for the three buildings that comprise the lab. The main structure is the rectangular pavilion in line with the main entrance to the city-owned property from Houston Street on the south; it extends to 1st Street between two buildings. A cafe is located towards the Bowery on the west, and a building with toilets is tucked into the easternmost part of the property. These last two buildings are wood where the pavilion is decidedly not; the juxtaposition increases what is special about the main pavilion, what appears to be a simple steel building wrapped in carbon-fiber mesh. 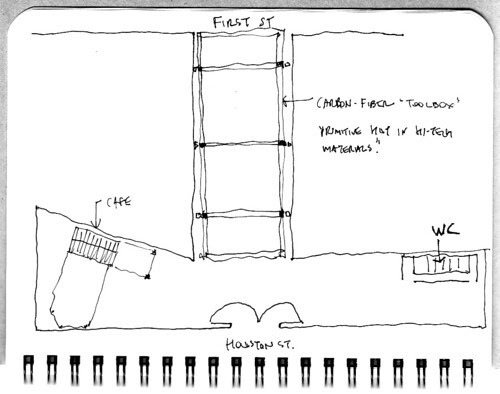 Of course the pavilion is anything but those things. First, it is carbon fiber, not steel. Carbon fiber is an extremely lightweight and high-tensile (15x steel) material more common in airplane than building construction. While significantly more expensive than steel, for the time being, the material is well-suited for a pavilion that will need to travel, reducing the transit load. As well, the structural members are smaller and fewer than if they were steel, allowing the openness of the completed pavilion. 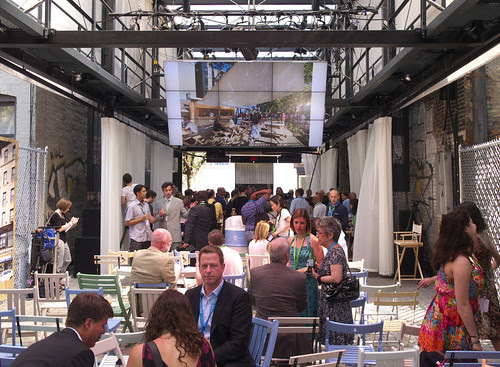 [Looking north from Houston Street side]

Atelier Bow-Wow's design of the pavilion is basically a rectangular box that is lifted above the ground on six columns. The volume of space above is basically the same as the volume of space below, the latter of which is completely open from end to end. Furnishings occupy the space, but each and every piece -- chairs, tables, bleachers -- can be hoisted into the open space above. Note the cage with folded tables in the photo below. The other additional pieces are a couple lengths of curtains that allow the space to be closed off or partitioned and a catwalk traversing the upper level. The upper enclosure is wrapped by mesh on the sides (black outside, off-white inside) and a translucent covering on the curved roof. Considering the number of discrete architectural elements and the density of fixed and movable objects in the upper zone, this is hardly a simple building; it's architectural sleight of hand. 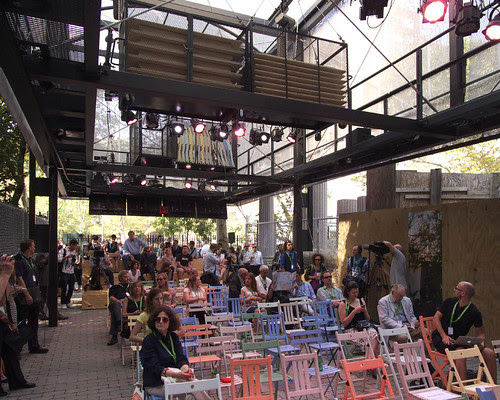 In a sense this pavilion is a well-crafted hybrid of two very NYC things: the tents of open-air markets and Broadway theater. The former comes across in the way the wrapped portion is lifted up off the ground, while the latter is found in the rigging that holds the lights, monitors, and other equipment, yet also allows the furnishings to be raised and lowered on demand. I doubt Atelier Bow-Wow was trying to emulate these constructions, much less that they were inspired by them, but this comparison is anything but formal. In form the pavilion strives for what the Guggenheim asked for: something non-iconic. It's hardly generic, but it serves its flexible purpose without striving for a striking expression. Yet this didn't stop one onlooker at the press preview yesterday from levying a critique that "it's not fun." 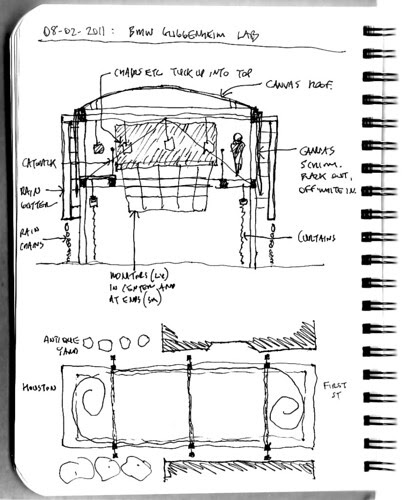 Fun may be had in Urbanology, an interactive game developed by Local Projects with ZUS in which "visitors role-play scenarios for city transformation and become advocates for issues such as education, housing, health care, infrastructure, and mobility as they build a city that matches their specific needs." A number of yes/no questions are asked of participants who move pieces on a projected grid on the floor of the pavilion. They move their pieces -- each represents something, such as money or sustainability -- in a positive or negative direction, resulting in a graph that is then charted against comparable world cities. It doesn't seem as interesting to me as some of the programs that will otherwise occupy the space, but educating people on the benefit or harm of certain decisions is certainly commendable. 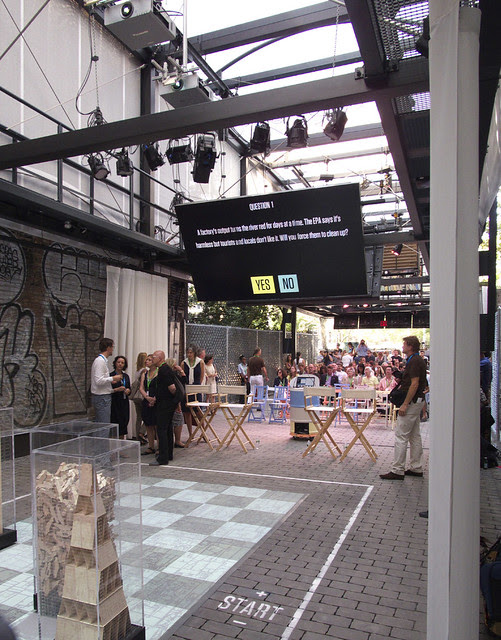 The pavilion will be seen more for the events that will transpire over the next couple of months than the structure itself, but some positive effects of the design are worth pointing out. First is the way the building fits into its context. Not only does it span the length of a vacant lot, knitting together two streets (fairly uncommon in the city), but it does so in a fairly striking way. From Houston Street, the pavilion is camouflaged by the trees, but on 1st Street the raised box stands out between its brick neighbors (it kind of looks like the sidewalk shed to the left in the image below, doesn't it?). The hovering box reaches towards the street to draw people into the space; the veiled space above further piques the interest of passersby as to what is happening. I could see vacant lots around the city benefiting from this insertion, being used by the community as a flexible space for whatever they need. I could also see it landing within Atelier Bow-Wow's definition of "pet architecture," in the way it takes over space unused. 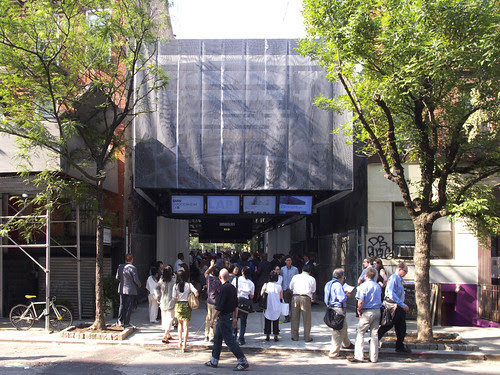 Second, the pavilion and the two wooden buildings are well-detailed blends of the standard and the custom. The carbon fiber is a new avenue that basically resembles a steel structure, but the range of the material is evident in its use as scuppers and downspouts (image below). These pieces that are mounted to the columns stop short of the ground by a few feet, from which rain chains extend to the paving. Speaking of, the pavers are also a blend of the standard and the custom: Their shape --  not purely rectangular but subtly radial with jogs at the corners -- gives the impression that they should be in a interlocking pattern; instead they are laid in rows with gaps of 1/4-1/2", drawing attention to the unique shape. The bathrooms, at bottom, use standard lumber, but the rows of siding alternate inside and out, expressing the posts and bracing. The wood-lined toilet rooms themselves are also a nice change of pace from port-o-potties and other standardized water closets. 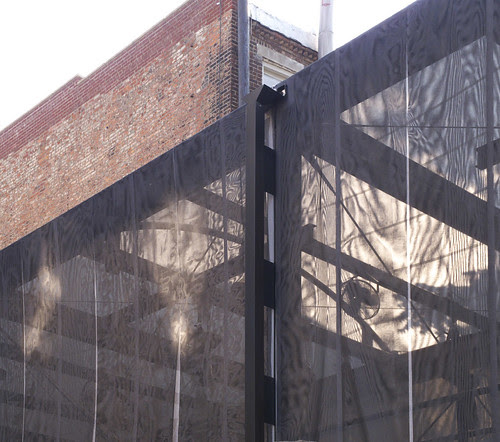 [Detail of mesh wrapper and downspout]

Of course the BMW Guggenheim Lab and the pavilion in which it is housed raises many questions. What will happen to the site after they leave? How will what is learned and gathered in the public programs be shared with a wider audience? Is the only way to explore the "creation of forward-thinking solutions for city life" with the help of a global car company and a global arts institution? Why focus on comfort? Whose comfort? I'm just pleased to see initiatives focused on urbanism and sustainability, two broad areas whose merging I'd like to focus on further in some capacity. With Urban Design Week coming next month, it's a good time to be in the city. 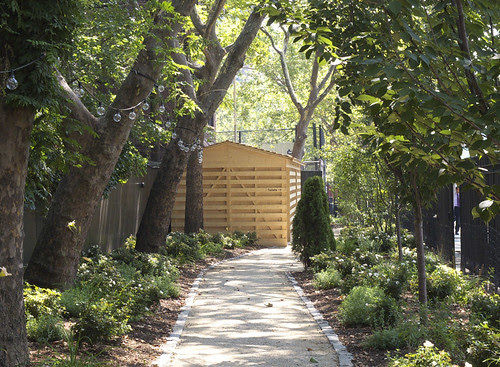 [The toilet building east of the pavilion]

Some highlights from the BMW Guggenheim Lab's programming from August 3 to October 16 (check their calendar for many more events):