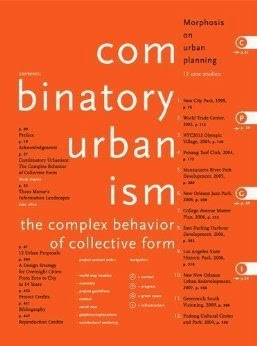 Anybody with even just a leisurely interest in architecture is familiar with the buildings of Morphosis and Thom Mayne, the Pritzker Prize-winning architect from Los Angeles. This is especially the case because of high-profile buildings in his hometown (Caltrans District 7 HQ), in San Francisco (Federal Building), and in New York City (41 Cooper Square). These striking forms are memorable for how they stand out amongst older buildings and how they activate their surroundings. Often controversial, these and other projects are not arbitrary; they take cues from their contexts, or as Mayne has said, context is "data for interpretive architecture."

This approach infuses the dozen urban design projects collected in this latest monograph on Morphosis. The focus on single buildings is gone, but the dynamic forms are present, yet as potential configurations of programmatic elements, not as final results. Think of Daniel Libeskind's master plan for the World Trade Center site; his evocative forms may have helped him win the commission (arguable, I know), but they were merely indicators of program, height, and certain aspects of form (sloping roofs, for example), so the ensuing designs by other architects do not resemble his renderings. The same sort of thing would apply to Mayne's projects collected here if they were to advance toward being implemented. Yet even with that in mind the formal strengths of his renderings and plans make it hard to imagine more traditional alternatives. Of course each project's evolution depends on its size and the number of urban actors in the mix, so the NYC2012 Olympic Village may have been realized as envisioned, but the much larger New City Park over the Hudson Rail Yards probably would have morphed into something where the "noodles" and "snakes" were transformed into more traditional typologies around the "warp" that is the project's heart.

So what is it that drives the forms to be what they are, even if they are not stable entities in urban flux? As indicated the data inputs from the context -- be they physical, social, natural, political, economical -- merge with program requirements to create various scenarios. The computer, specifically parametric modeling, is the tool that enables, for example, 100 strategies to be explored in the New City Park project, three of which were fleshed out in some detail and presented here. With parametric modeling's ability to let form fluctuate depending on various inputs, time is a factor that is inserted into these urban projects. The presence of the fourth dimension means phasing and change can be considered, something that certainly makes sense with projects spanning many years, various politicians, and even multiple economic cycles. This consideration brings the projects towards the "collective form" of the book's subtitle (influenced by Fumihiko Maki's publication Investigations of Collective Form - 7.5mb PDF link), but of course the fact that the projects are overseen by a single architect/firm is a paradox of this approach. At its most basic, collective form is found in the Medieval hill towns of Italy, which evolved over long periods of time through negotiations of the different neighbors and landowners. But in Mayne's hands, evolution is sped up through the integration of the computer and the contextual data it is able to process. It's an interesting approach that is backed up with a solid bibliography (a valuable component of the book) and the usual stunning visual documentation that defines Morphosis's architectural projects.

The dozen projects range from LA to New Orleans, New York, Spain, China, and Australia. The smallest is definitely New Orleans Jazz Park, but it is one of the strongest projects in that it illustrates the potential for works of architecture to be influenced by their contexts and in turn improve upon them. What started as a single building is here used as a means to redesign the adjacent park and its civic realm, while also using the space to connect disparate parts of downtown. The post-Katrina context of New Orleans is certainly unique, but it is a strategy that can be applied to many urban projects and sites; architecture is not seen as an object inserted into the city but as something that knits parts of the urban fabric together. This strategy may go beyond what clients are willing to pay for, but it informs design in a way that future of a building's immediate context is considered and a building is open to potential evolutions that are ideally positive and sustainable.