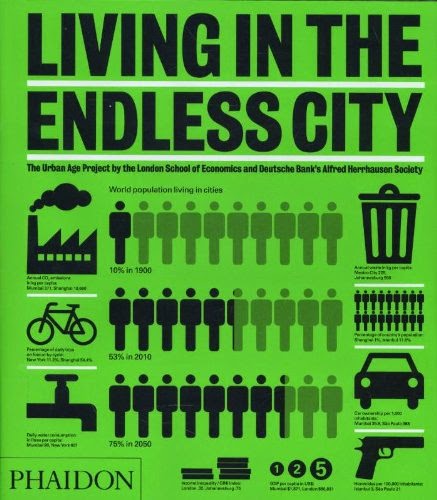 For those who digested 2008's The Endless City -- a product of the Urban Age conferences organized by the London School of Economics and the Deutsche Bank's Alfred Herrhausen Society -- this follow-up will tread familiar territory. The cover of Living in the Endless City even extends the data mining of the first book, yet this time around it opts for a visual approach over merely numbers (the center of each cover actually says exactly the same thing, one numerically, one graphically; to me the latter approach sinks in harder). Nine cities were the subject of the Urban Age conferences and six were collected in the 2008 tome; this book, almost as big, features the other three cities -- Mumbai, Istanbul, São Paulo -- alongside a lengthy introduction, lots of data, and "reflections" by conference participants, most academics. 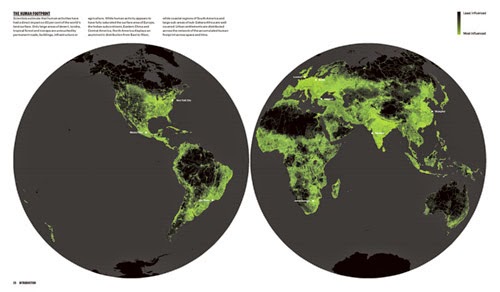 In addition to essays by editors Burdett and Sudjic (and a great one by Saskia Sassen that shatters some well-regarded beliefs on the economies of cities today) the introduction includes a series of global views that statistically map human density, the human footprint (above), transportation, growth, and other characteristics that effectively convince readers that this book -- and its conference backbone -- are necessary. The whole is predicated on the fact that for the first in human history, more people live in urban than rural areas. That number is expected to increase well beyond roughly 50/50 to 75/25 in less than 40 years. The serious toll that such an increase will (continue to) have on the earth and people requires a multi-pronged look at urbanism in places of extreme density. Each chapter on Mumbai, Istanbul, and São Paulo includes full-page photos, stats, and essays on the physical, the political, the social, the economic, and the cultural. As is life, overlaps in these areas exist in the essays, but the idea is to take into account a multiple of viewpoints and strategies for analyzing the city, not prioritizing any over the other. 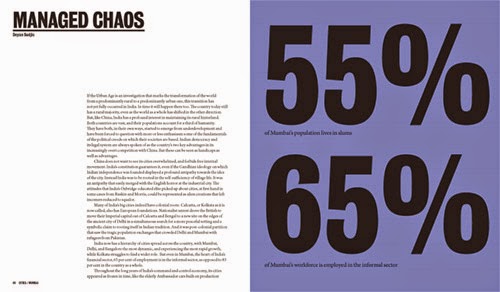 The data section of the book presents all nine Urban Age cities (New York City, Shanghai, London, Mexico City, Johannesburg, Berlin return from the first book) together and at an equal scale. Most of the maps and charts are at a small scale, using color gradients to aid in understanding, but each city is given a spread with a hybrid map/graph for density and a Nolli-esque figure/ground map of a one-kilometer square. These illustrations are good at showing extremes (comparing Mumbai and London is especially jarring), but Justin McGuirk's essay "Understanding the Numbers" is an extremely helpful addition for doing what the title says, while also inserting a dose of skepticism about what data actually tells us. 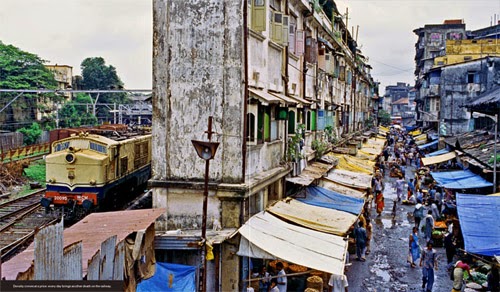 Rounding out the book are eleven "reflections" by names like Richard Sennett, Alejandro Zaera-Polo, Alejandro Aravena, and others. The essays by these three are particularly relevant for architects reading this book, directing attention towards, respectively, physical and social borders, the implications of "cheapness" in architecture and building, and making housing affordable. The whole undertaking ends with the Deutsche Bank Urban Age Awards, which range from "the ordinary [to] the spectacular" and include toilets in Mumbai that were improved by putting a classroom over them (this function made people want to keep the toilets clean, where before they ignored them after use). These awards illustrate that the answers to problems represented with big numbers on a global scale are actually small and local. Change will not be quick and widespread, but it will arise from interventions that creatively address the physical, the social, and the economic.