This installment of "Book Briefs" -- an ongoing series of posts with two- or three-sentence first-hand descriptions of some of the numerous books that make their way into my library -- focuses on some recent monographs, many of them firsts for the respective firms. These briefs are not full-blown reviews, but they are a way to share more books worthy of attention than can find their way into reviews on my daily or weekly pages. 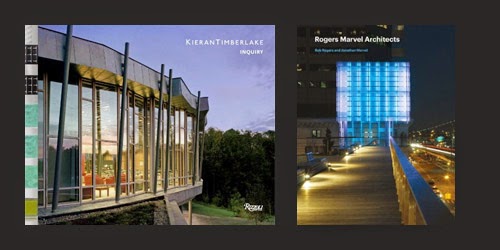 1: KieranTimberlake: Inquiry by Stephen Kieran, James Timberlake and Karl Wallick | Rizzoli | 2011 | Amazon
Unlike most architectural monographs that present projects, one after the other, often sectioned off by themes characteristic of the firm, this second monograph on Philadelphia's KieranTimberlake does the opposite. Themes (bending, coupling, filtering, inserting, ...) structure the book but also the contents of each project, so that each building gets "exploded" into the various themes, spread across them and pieced together in the reader's mind; this follows the format of their first monograph, Manual. The structure prioritizes formal concepts, process, and details over the individual works, though the projects are keyed at the back of the book via plans for and page numbers for reference. At first I found this tactic annoying, wanting to learn about each project in its entirety across sequential pages -- the norm -- but then I warmed up to the slow digestion of project information and the elucidation of themes via visual rather than textual essays. Less a monograph than an articulation of ideas and strategies, it's a good approach that teaches the reader about the work of KieranTimberlake, and about architecture in general in the process.

2: Rogers Marvel Architects by Rob Rogers and Jonathan Marvel | Princeton Architectural Press | 2011 | Amazon
When doing research for my Guide to Contemporary New York City Architecture, just about any project in the five boroughs by Rogers Marvel Architects was in the running for inclusion. Not only are they extremely good architects, but their work is almost exclusively focused on the public realm, from schools and libraries to housing and even streetscapes. Sure, single-family residential projects are part of their oeuvre, but they are outnumbered by the projects that, even if not open to the public, help shape the public realm through their presence. This first monograph, introduced by Michael Sorkin, splits the projects into three sections: buildings, adaptations, and public spaces. Working primarily in New York City, the second chapter makes a lot of sense, as does the fact that the buildings in the first chapter are mainly found outside the city. The public spaces, such as the security streetscapes in Battery Park City and near the NYSE, respond to the militarization of urban spaces, but they do it simply and beautifully. These and other projects are clearly the result of architects caring for the public, not just considering them. 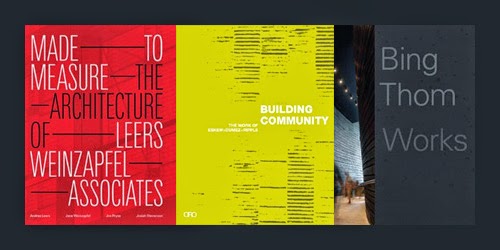 3: Made to Measure: The Architecture of Leers Weinzapfel Associates by Andrea Leers, Jane Weinzapfel, Joe Pryse, Josiah Stevenson | Princeton Architectural Press | 2011 | Amazon
The name of the first monograph on Boston's Leers Weinzapfel Associates becomes apparent in how the firm categorizes its projects into three sections: “Compacting & Wrapping,” “Weaving & Embedding,” and “Stitching & Fitting.” Bespoke architecture, like a well-tailored suit, is the metaphor of choice here; suited to the client (most are universities) and context but not fashionable, like a passing trend. It is ultimately a fairly traditional monograph covering the firm's 30-odd-year career, with some very solid documentation in words and images. It also includes a foreword by Joan Busquets and an introductory essay by Marion Weiss. (For an in-depth review see Norman Weinstein's review at ArchNewsNow.)

4: Building Community: The Work of Eskew + Dumez + Ripple | ORO Editions | 2011 | Amazon
During the AIA Convention in New Orleans in May this year, Eskew + Dumez + Ripple hosted a party that highlighted the city -- out the window of their top-floor office downtown -- the city's food, and the firm's architecture. Like other architects, the drawings, models, and photos found throughout the office illustrate their work, but not as well as the office itself. The space is raw yet well tailored throughout; the custom yet inexpensive furniture is accompanied by surprises like walls of corrugated cardboard. In this first monograph on the 32-year-old firm, the numerous projects -- most of them institutional or educational --  are accompanied by essays by Reed Kroloff, Alex Krieger, and Lawrence Scarpa, on, among other things, their role in community building and their ability to tap into a sense of place, that place being New Orleans and other parts of the South. Their contemporary contributions to this context are illustrated through the usual sketches, drawings, and models, but it's the large-size photographs (most by Timothy Hursley) that really convey their design sensibilities, ranging from the smallest details to the grand gestures.

5: Bing Thom Works by Bing Thom Architects | Princeton Architectural Press | 2011 | Amazon
Before starting his eponymous firm, Bing Thom worked for "his instructor and mentor" Arthur Erickson. This relationship is evident in the grand spaces and formal exuberance of BTA's work in Western Canada. before starting his eponymous firm. In this first monograph on the Vancouver-based firm's output, large-scale photos predominate, suitable for the spaces of their arts and civic projects. Essays between projects explain their projects in terms of jazz improvisation, being influenced by where they live and work, and other qualities; the book also includes a foreword by Fumihiko Maki.
Email Post
Labels: book-briefs