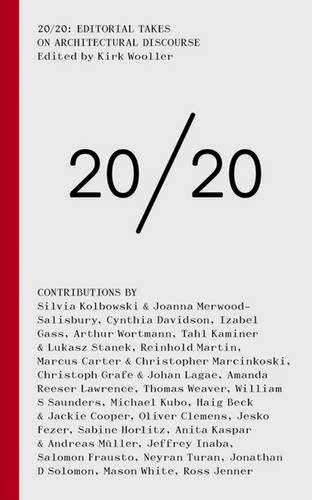 Counter to the current trend for digital books and publications -- achieved with varying results on devices like Amazon's Kindle and Apple's iPad -- architectural publications in print are going strong. They may not tally the numbers that magazines on other topics (digital or print) garner, but they exhibit numerous qualities that cannot be found in this digital shift, namely a good deal of care in the layout and tactile nature of the publication and the relationship between the magazine's goal(s) and its tangible presence. In other words, they are beautiful objects, something books and magazines should be (especially if the price tag is $20 and up, as some of the periodicals in this book are).

The relationship between form, content, and editorial direction of architecture magazines today is the subject of this  book from AA Publications. The 20/20 of the title are the number of publications and the number of questions given the chosen editors. The selected publications range in age (from Yale's Perspecta, which started in 1952, to last year's newbie [Bracket]), geography (Down Under is represented by a couple, including the wonderful Ume, but most are located in Western Europe and the Northeastern United States), and focus (a roughly even split between academic and trade), making for a wide-ranging survey of the state of architectural publishing outside of corporate mainstays and shelter rags. In my own experience I've read or encountered all but a few (Footprint, Interstices, Manifold, New Geographies), so my familiarity with most of the publications means the editors comments are a reinforcing or elucidation of what should be apparent in reading their issues.

As can be expected, most of the editors veer from the 20 questions in their responses. Only William Saunders (Harvard Design Magazine) actually lists the answers to the questions (which are printed on a bookmark that comes with the book, for easy reference); Jeffrey Inaba (Volume) appears to be answering 20 questions, just not the ones from editor Kirk Wooller!; and Jonathan D. Solomon (306090) takes a trip through Wikipedia with 20 entries that start with the word "theme." The rest describe how themes are defined, where applicable, how writers are selected for contributions, how layouts are designed, and so forth, all important but basically skirting the questions in favor of something more focused. Of course the 20 questions -- a nuanced bunch, which ranges from criticality to scholarship in editorial intention -- can be taken together as an impetus for responses, with some questions being more important for one editor/publication than others. Veering from the questions is not a big issue in terms of what is learned about the individual publications, but it makes me wonder what the results would have been like otherwise, especially in terms of comparison and cross referencing of the different journals.

Ultimately this snapshot of architectural publishing at the beginning of the 21st century is valuable for the insight into what a few select individuals in a unique spot see as important in architecture and publishing at a time when both are changing rapidly (Is there ever a time when we say things are not changing rapidly?). Even as most of the responses veer from the 20 questions, they elicit candor that is refreshing, particularly when their publications may not be so easy to digest (Grey Room, Log). This book is recommended for those who read any of the publications included (and it's safe to say if you read one, you probably read more), but also those interested in the state of architectural print in a digital age. In addition to the publications mentioned above, the remainder of the 20 includes: AA Files, Actar, An Architektur, Hunch, Mark, OASE, Praxis, Scapes.