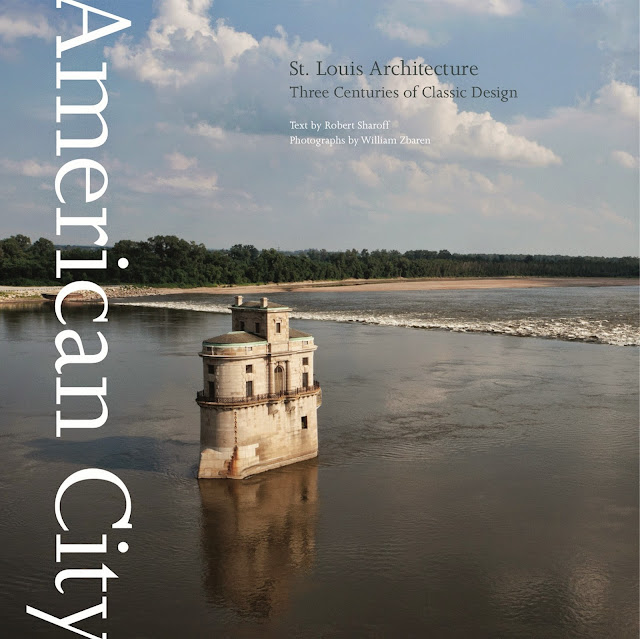 American City is a book series created by architectural photographer William Zbaren and journalist Robert Sharoff. They describe the series, which started with Detroit in 2005, as "about Classical courthouses, Romanesque train stations, Art Deco office buildings, Mid-Century schools, Modern museums and the occasional geodesic dome." This broad range of styles and typologies clearly indicates that the books span long time periods, not just focusing on the old or the new. Detroit Architecture covered significant architecture produced between 1845-2005, and its follow-up on St. Louis starts with the Old Courthouse from 1864 and ends, 50 buildings later, with a 2010 plaza by Maya Lin. Forthcoming are books on Chicago and Savannah, but it's interesting to note that the first two titles focus on cities that are synonymous with 20th-century decline, be it population, jobs, manufacturing, and building stock. The first two books instill an appreciation for once booming cities, read in the impressive architecture handed down for generations.

First and foremost, St. Louis Architecture is a coffee table book. The format is large (approx. 11" square) and the photographs are also big, sometimes a page-and-a-half. Zbaren's photographs range from overall shots that situate the buildings in their urban context to details of ornament. Many give the reader a vantage point they might not otherwise have: a view from a building across the street, an interior they may not access. (Regarding the latter, the interior shots are public buildings that allow access -- not office buildings, for example -- but not necessarily ones that normally allow photography.) Minimal criteria are used -- no ruins, houses, or churches -- to select the "top 50 of everything right down to public works projects  like bridges and water towers." These top 50 follow a fairly in-depth introduction by Sharoff that highlights important architects at different periods in the last century-and-a-half. His text accompanying the photos are brief, so reading the introduction helps in learning more about the various architects and their influence in and beyond the city. Ultimately the photos and text work together to create the equivalent of a leisurely stroll through the city's architecture, where the beauty overrides the decline; a spur for filling in the blocks between these landmarks and moving back into the city, if ever there was one.