Zines are riding a high at the moment. What with ARCHI-ZINES displaying its catalog of current architectural zines at the AA, and as more and more self-published publications hit the printers every month, it's clear that for every (digital) action there is a (paper) reaction. Getting a hold of a copy of a zine -- be it academic ones like Candide, European ones like Junk Jet, or one-offs like Evil People in Modernist Homes in Popular Films -- is more difficult than firing up the old CPU, but the experience of a reading a zine can be eminently more rewarding. The format offers immediacy, tactility, varied layouts, and a passionate focus on content.

Recently I received Inside Marina City, a project by Iker Gil and Andreas E. G. Larsson that accompanies the exhibition Bertrand Goldberg: Architecture of Invention at the Art Institute of Chicago. Inside Marina City is both exhibition and zine that focuses on the residences of the iconic "corn-cob" towers in Chicago that Goldberg designed in the early 1960s. The exhibition/zine project started in the summer of 2009 when architect Gil (of MAS Studio / MAS Context) and photographer Larsson solicited residents "interested in participating in the project by allowing them and their condo units to be photographed." (Gil actually lives in Marina City, and this post at Apartment Therapy indicates his and Julie Michiel's kitchen is pink, with matching Bialetti, to boot.) 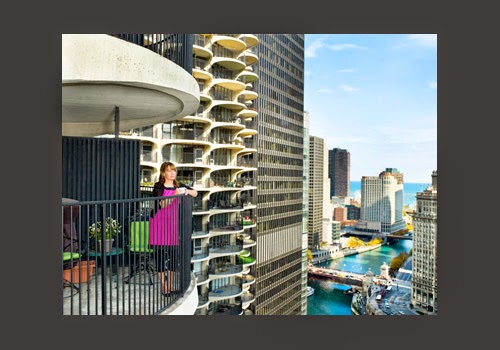 Inside Marina City's large color photos are collected in a Chicago Tribune-size zine. Text is limited to an introduction by Art Institute curators Zoë Ryan and Alison Fisher. Outside of this and a few floor plans illustrating the efficiency, one-bedroom, and two-bedroom units, the photographs command. They are meant to show, according to Gil, the "heterogeneous group of residents...from those that have lived there since the complex first opened, to young students, renters, [and] designers. At the same time, the interior of the units reflect this heterogeneity and the change in trends, making this complex a fantastic architectural and social project."

This diversity certainly comes across in the zine, but for me diversity at Marina City also exists in the various uses found throughout the various buildings, hence its name, as if it's a city within a city. Marina City also has a concert venue in a separate building and offices in a slab above retail space, which includes a restaurant and a bowling alley. At least this is my memory of the place, from over five years ago. Bak then I went to a co-workers party in one of the towers, I used to roll in a bowling league in the alley below the offices; I saw at least one concert in the clam-shell building at the base of the towers. For somebody who lived and worked in other parts of the Chicago, Marina City was nevertheless a part of my life on numerous occasions.

But this type of diversity is not acknowledged in Gil and Larsson's project; they choose to limit their photographic inquiry to the residences and the personalization of the repeated "kernels" (to extend the corn cob analogy) by the residents. Is this a problem? Not really, especially when acknowledging that photography is about omission as much as it is about the image. The framing of photography is extended to the framing of the lives of people living there. And most importantly, the project focuses on the raison d'etre for the building, the people that live there. For me Marina City was a place to go for this or that, but for residents these other amenities are an extension of their apartments; they need not embark past the boundary of Marina City if they don't want to, be it for grocery shopping, entertainment, or work. At the root of a successful mixed-use project -- and Marina City is one of the firsts of its kind -- are the people that will make the rest of the project successful. Can we tell that from the photographs? No, not really. But we get a personal glimpse at who lives there, and through their furnishing and finishings, to a certain degree we see why.