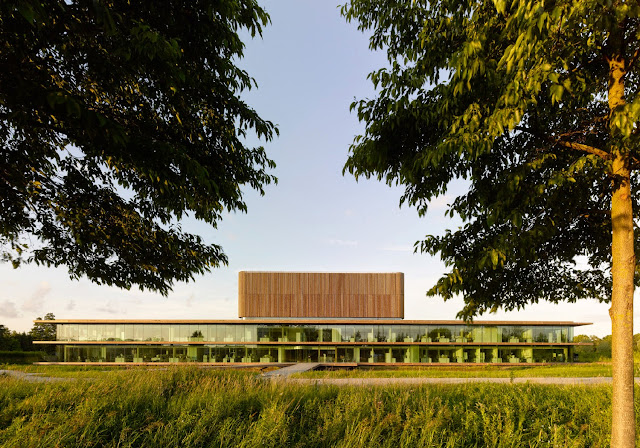 In the influential book Cradle to Cradle: Remaking the Way We Make Things, William McDonough and Michael Braungart argue that recycling is in effect "downcycling," since the quality of the material is degraded. Instead they push for "upcycling," where the material, such as a plastic, is after use turned from, say, a bottle back into a bottle. This type of recycling, keyed to the chemistry of the materials in the things we make, theoretically produces a closed loop, hence the cradle-to-cradle (c2c) moniker. According to Claus en Kaan Architecten their design for the NIOO-KNAW is based on the c2c concept.

NIOO-KNAW is a research institute that sits on the campus of Wageningen University, but falls under the aegis of the Royal Netherlands Academy of Arts and Sciences. The institute's main building houses laboratories, offices, a restaurant and an auditorium; some smaller separate buildings are used for botanical and zoological research, and the compact site also contains test beds and ponds. The main building, shown here, is a long, rectangular two-story building that is oriented a few degrees off of true north-south. The primary elevation, above and at left and right, faces west; behind the glass wall are laboratories that are shaded by continuous wood canopies that wrap the two short sides.


The compact building ... generates an enormous amount of space that stands for the most important principle of the building: informal encounters. -Claus en Kaan Architecten

The other long edge of the building -- photo at left, the facade facing east and the secondary buildings and the test beds/ponds -- is where the offices are located on both floors. These offices are also located behind expansive glass walls, but sun control is via operable exterior shades, and the glass includes natural ventilation and is framed with wood mullions, whereas the other sides feature butt-glazed glass walls that span from floor to ceiling. The two exterior expressions are unified by materials but also the large wood-slat cap that houses a conference room and canteen, and provides access to a roof terrace.

This wood penthouse hints at the core of the building, the zone between the west-facing labs and east-facing offices. Here we find support laboratories, restrooms, and other support and service spaces, as well as horizontal and vertical circulation. The corridors ring the support spaces, and people are afforded glimpses into the labs and offices. The stairs are located in atrium spaces that brings sunlight to the middle of the building. This simple plan of perimeter and center rooms rung by corridors, all punctured by atria lit from above, gives the building a strong internal focus that jibes with the architects' desire to spur informal encounters. Likewise the glass perimeter links the labs and offices to the larger site, giving some awareness of the part they and their building plays in the larger environmental context. 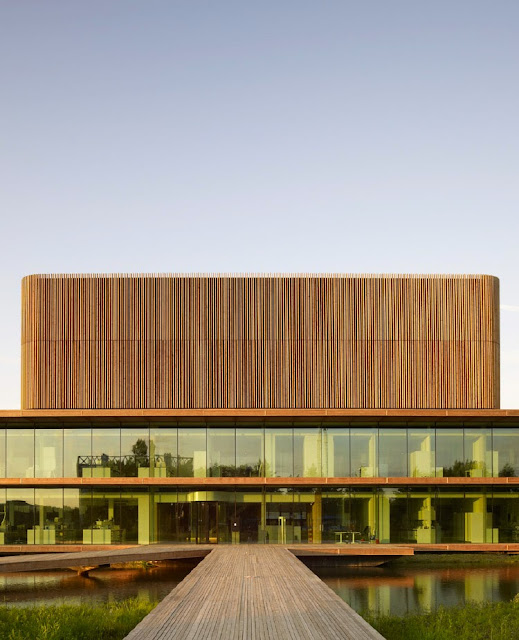 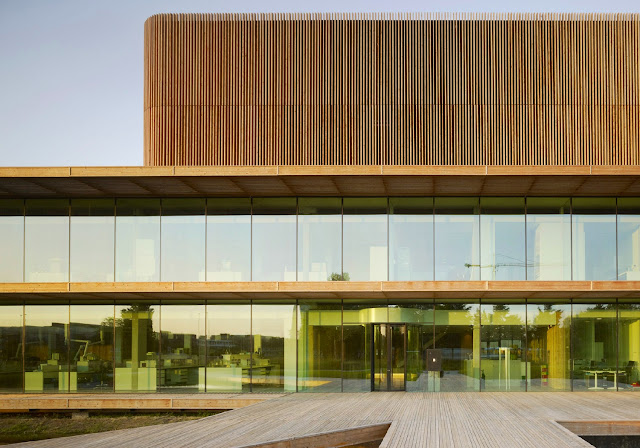 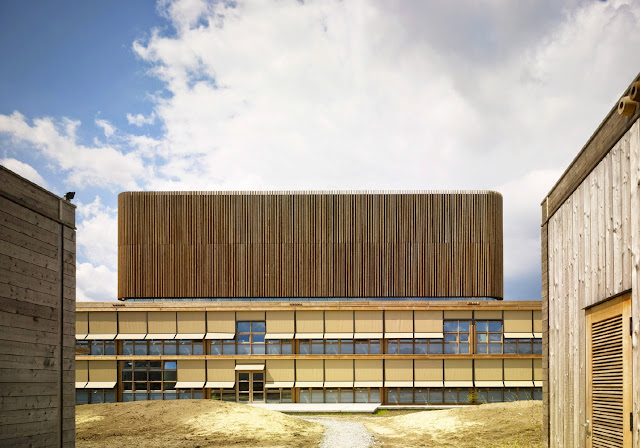 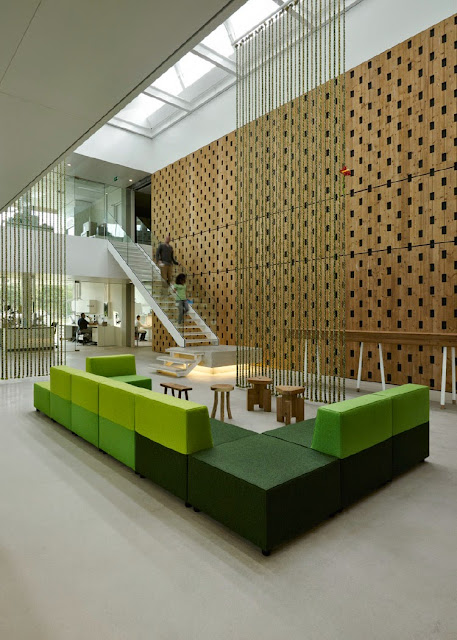 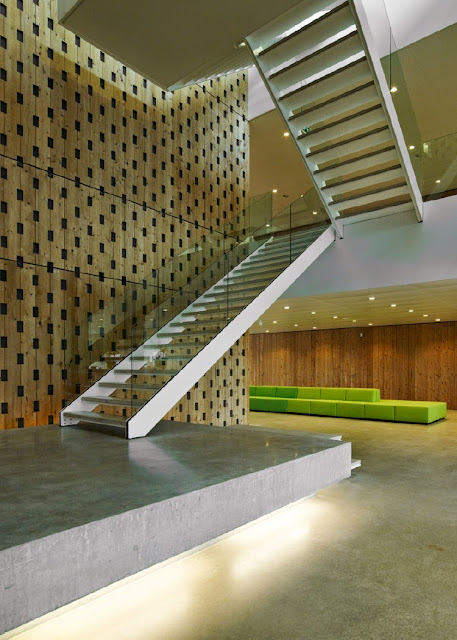 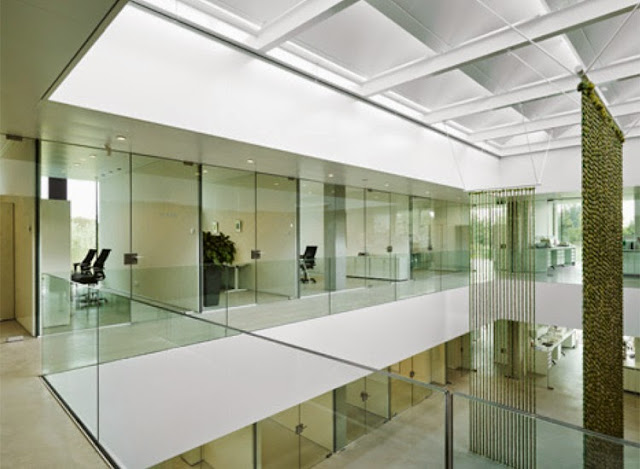 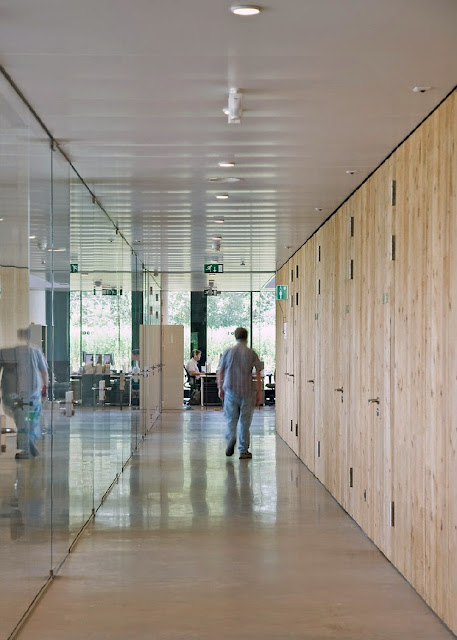 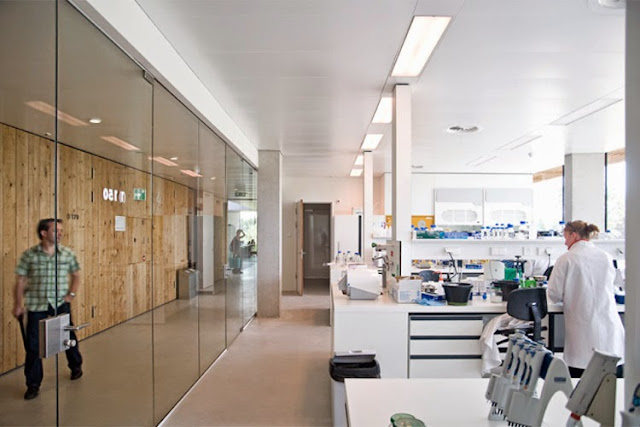 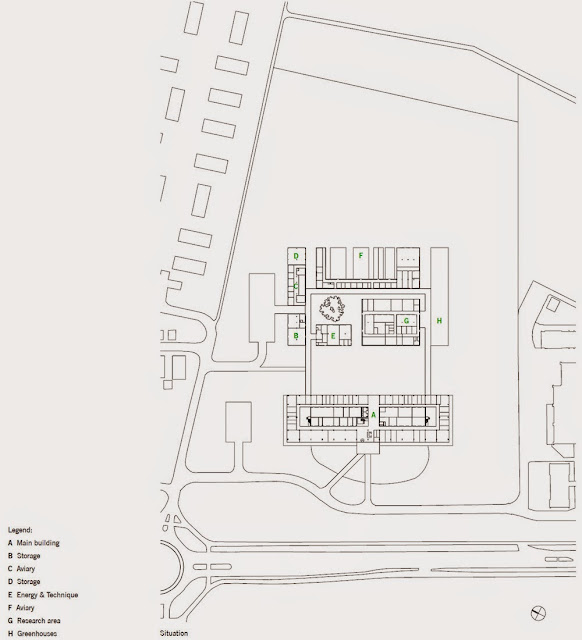 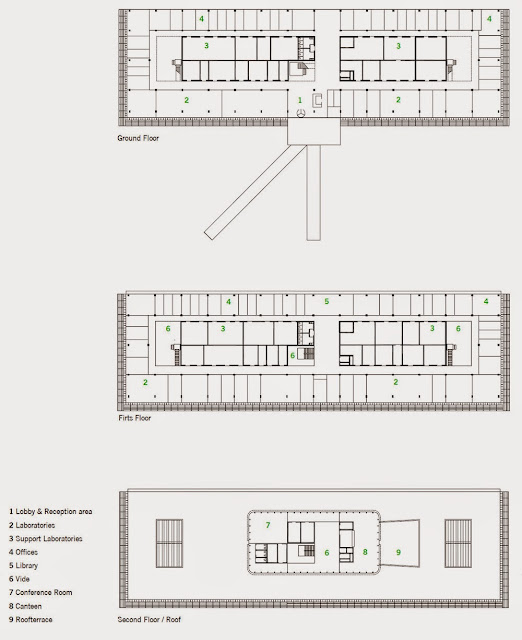