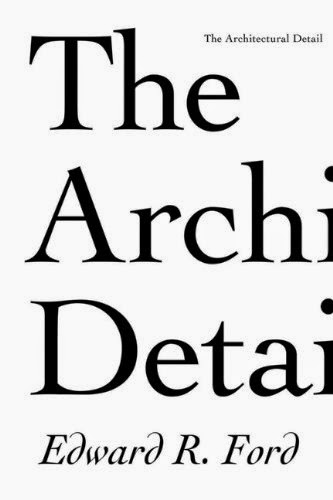 Following 2009's Five Houses, Ten Details, architect/educator Edward R. Ford broadens his scope of investigation on his favorite topic: the architectural detail. The earlier book looked at five iterations of his own house, while the latest book presents five types of details in the work of 20th century masters and contemporary architects of note. These five types of detail -- as abstraction, as a fragment in which the whole building is represented, as the articulation of structure, as the articulation of construction, as autonomous design -- move from his least to most favored, making the book an unfolding of the critical wisdom that Ford imparts upon the reader. Except for the autonomous detail -- his preferred mode -- there is a great deal of overlap between the different types, particularly when he uses the buildings of, for example, Rem Koolhaas, an architect who doesn't really believe in detailing and therefore uses various approaches towards them in a single design.

The roll call of architects besides Koolhaas is impressive, be it the modern masters rooted in the two-volume Details of Modern Architecture (Peter Behrens, Frank Lloyd Wright, Mies van der Rohe, Le Corbusier) or contemporary architects (Steven Holl, Peter Zumthor, Herzog & de Meuron, UNStudio). Many more accompany these big names, but the overall effect is that this study is focused on the modern masterpieces and 21st century icons. Where does this leave the majority of architects practicing today, the ones who might read Ford's book? Must they refer to his previous book for discussions relevant to more modest commissions? And does The Architectural Detail's choice of projects and architects mean that the types of details Ford explores are limited to big-budget projects by big names? I'd argue that Ford's five types of architectural details, while grounded in real-world construction, are abstract, so they can be applied to various situations. That is, except for off-the-shelf solutions; bespoke is the name of the game, and as such details are an expression of the architect, hence the reliance on recognizable names and buildings for the most part.

Across the five types Ford presents his argument with his critical/theoretical text, photographs, and construction details. The last -- originals made for the book -- are mostly axonometrics that mix line drawings with digital patterns used to describe materials. They are very appealing drawings. The details, not surprisingly, serve to reveal what is not shown, and for most of the types that is as important as what is visible. The details therefore provide visual continuity across the types and give the reader a means for comparing them beyond form and appearance (photography). Unfortunately Ford does not provide as many autonomous details as he does for the others, even though the chapter is the longest and it is the type he promotes.

Ford ends the book by asking, "What is detailing?" He may not give a clear answer that can be applied to all buildings, but what is clear is why the book arrives now (his first book was published in 1990): the book responds to the desire of architects embracing digital technology, who speculate on a future of seamless buildings without joints and therefore without details. What happens to architecture if this composite method prevails? Of relevance here is the loss of autonomous details, those that are "inconsistent, imperfect, or exceptional part" and, as the author asserts, mediate between what we see and what we feel. Handrails, door knobs, and other elements, when treated as designs in and of themselves on their own terms, serve such a mediation, and their loss at the expense of a seamless building would be a shame. A longshot but a shame.