Book Review: SHoP: Out of Practice

SHoP: Out of Practice by SHoP Architects
The Monacelli Press, 2012
Hardcover, 420 pages 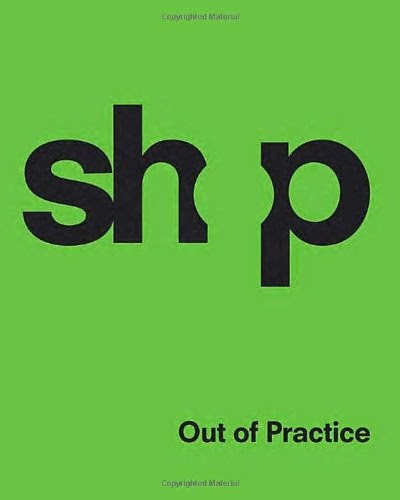 Given their output, it is probably surprising to many people that this is the first monograph on New York City-based SHoP Architects. But given the firm's distinct levels of diversity, control, and perfection -- evident in the fact they designed the branding and graphic design that defines the look and feel of the book -- this shouldn't be a surprise after all. Founded in 1996 by Christopher Sharples, Coren Sharples, William Sharples, Kimberly Holden, and Gregg Pasquarelli, the firm's name starts to describe the defining traits of the now 60-person firm. As an acronym of the five partner's last names, SHoP expresses the founding individuals but also a focus on the larger team and the desire to build. The last, as it becomes apparent reading the introduction by Philip Nobel and the various essays by SHoP, is what drove the five to start their own firm and what defines its shape and its output. Straddling the realms of high design, academia, and the corporate, SHoP is increasingly seen as a model for a successful 21st-century architecture office, the antithesis of traditional models based on the single design guru or the service firm on the other spectrum.

Evidence of their unique position can be found in the various offshoots and collaborations that extend from the base of SHoP Architects: SHoP Construction was created to "utilize emerging technologies to provide sustainable construction management"; HeliOptix aims "to become the preeminent supplier of building integrated energy saving and producing systems for new and existing commercial facilities"; and G.Works, a partnership between HR&A Advisors and Buro Happold Consulting Engineers, that is "a single source for real estate energy efficiency projects" and is working with SHoP on their South Street Seaport project. These companies illustrate the reach of SHoP's thinking and day-to-day activities beyond just design, even though it's clear that the firm has strong design skills and is able to get them realized to better effect through their firm structure. SHoP is most outspoken about their willingness to use digital technologies to aid in fabrication of various components (facades, screens, etc.) through an early involvement with fabricators and other sub-contractors. This approach extends their risk but often equates with more design control and the ability to achieve more innovative designs at the cost of standard solutions.

The sizable monograph, handsomely covered in green linen with embossed text, collects 13 completed and in-progress projects. These range from their first project (MoMA/PS1's Dunescape) to the Barclays Center at Atlantic Yards, which will make their name more commonplace beyond the architectural circles where they are currently known; the high-profile stadium for the Nets will be a visible piece of the unfolding saga of Atlantic Yards as well as a photogenic backdrop for televised basketball games.  Between each project are visual essays that describe the various ways that SHoP distinguishes itself in its approach to architectural design and construction. Examples include "What classifies architectural practice?", "What makes construction intelligent?", and "Can we go beyond green bling?" Halfway through the book the partners delve into these and other areas with a long text essay that uses narratives to describe how their approach actually works in practice. The accumulation of text (including Nobel's intro), visual essays, and the documentation of the projects leads to a good deal of insight into SHoP without sharing all of their secrets. Over the course of fifteen years they have gained the skills and defined a unique approach that not only sets them apart from their peers but has allowed them to grow at a time when most firms are shrinking. As the in-progress projects attest, this means larger projects around the world and a diversity of designs that stem from their uniqueness without screaming "SHoP."