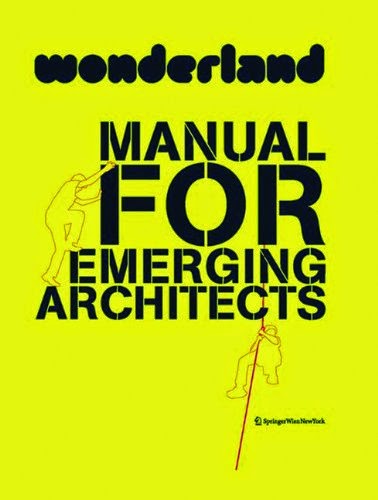 Some years back I downloaded the first issue of Wonderland - Platform for Architecture, a magazine that was distributed with A10, New European Architecture. Even though I only had a PDF, I was intrigued by the page layout, as well as the graphics and the means of visualizing information, the latter with its surveys on the state of architectural practice. Geared at helping young architects in Europe to start up a practice, the first issue, "Getting Started," came across as a fresher and more readable alternative to the US-equivalent, AIA's The Architect's Handbook of Professional Practice. This comparison, while unfair in that one is aimed at European architects and the other at American architects, illustrates what makes Wonderland unique: it surveys firms and collects statistics alongside numerous essays to embrace architectural practice in numerous guises, not just the traditional practice espoused by bureaucratic organizations like the AIA or RIBA.

The Wonderland Manual for Emerging Architects collects the magazine's first issue, the following two issues that were published -- "Making Mistakes" and "Going Public" -- and adds two previously unpublished sections: "Getting Specialized" and "Making Competitions." All five sections utilize the same style of illustrations and data visualization, set apart from each other through the different color schemes. Graphically the book is impressive, but it is the content that makes the book extremely useful to European architects, of course, but also to architects elsewhere. Some of the more practical information, such as the licensing requirements for the various EU countries, may not be applicable to a wider audience, but a lot of the data and contributions (interviews, essays, etc.) offer snapshots and advice that architects in other parts of the world will want to read. Many of the contributions by European architects give candid insights into various ways of working, be it dealing with clients, getting work, or promoting themselves.

Ultimately, the manual does not push for a single type of practice, a fact that is particularly evident in the epilogue by  Tatjana Schneider and Nishat Awan, co-authors, along with Jeremy Till, of Spatial Agency: Other Ways of Doing Architecture. In this regard Wonderland is valuable for architects who not only want to set themselves apart from their peers but want to do it responsibly and work towards dealing with areas of crisis that architects would do well not to ignore. The rest of the book is not as explicit about "other ways of doing architecture," but it provides tools and ways of thinking that work just as well towards an alternative practice than a traditional one.