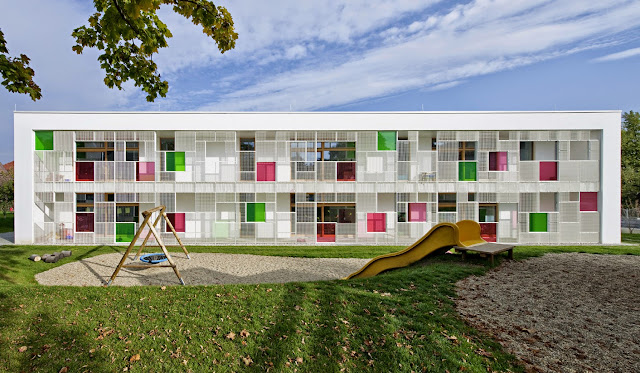 Photographs are by Hertha Hurnaus.

A small school in the town of Maria Enzersdorf, south of Vienna, required expansion in line with the community's growing population. A 2008 competition called for an addition with eight primary-school classrooms, after-school care facilities, and a kindergarten with kitchen. The association of MAGK and illiz architektur won the competition with a plan that uses L-shaped "which are interlaced in such a manner that different places and free spaces to play in and for learning are formed in the interstices." Each "L" relates to one part of the program, although the whole building is interconnected through corridors and to a certain degree the outdoor spaces.

This means of planning creates a variety of outdoor spaces: an enclosed courtyard, a courtyard open on one side, a space overlooking but setback from the street, and an space between the addition and the existing school. The last two are highlighted by orange-red paving that describes diagonal paths across the space; the rocky islands in between are used for play and for trees. The enclosed courtyard is generous and is used for the kindergarten; it is located at the farthest remove from the existing school. Finally the narrow, semi-enclosed courtyard is accessible from both the new primary school classrooms and the after-school rooms.


The differing design of doors, cloakrooms and wall panels in an individual range of color for each area of activity facilitates finding the way and increases their identification, particularly for the children. -MAGK and illiz architektur

The quote above makes it clear that color is used strategically in the school's design, but it is not limited to the interior. The western facade of the kindergarten (top photo) incorporates colored glass panels into a white, wire-mesh grid, creating a Mondrian-esque screen that filters the afternoon sunlight and makes for some interesting outdoor space on the front of the building. Color is used selectively in other parts of the facades, such as the kindergarten courtyard (left), where operable panels in the expansive glass walls are made from metal painted bright colors. These patches of color alternate with window cubbies that punctuate the different corridors.

Of course, using color as a means of wayfinding and identification points to a neutral background. Such is the case in the Childcare Center Maria Enzersdorf, as the exterior elevations and most of the interior surfaces are otherwise white. Facades sans color use window size and placement to add interest, such as pixelating small windows between window boxes that double as seats. There is an evident flavor in each L-shaped section, owing to the articulation of windows, the placement of color, and the various interior finishes. Nevertheless the general strategy ties the whole together into a bright and refreshing environment for some lucky children. 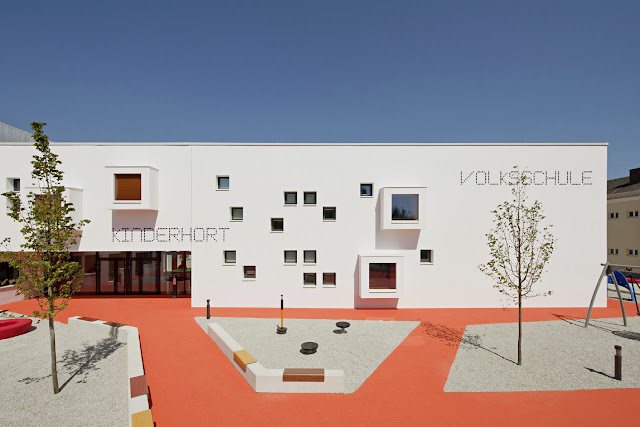 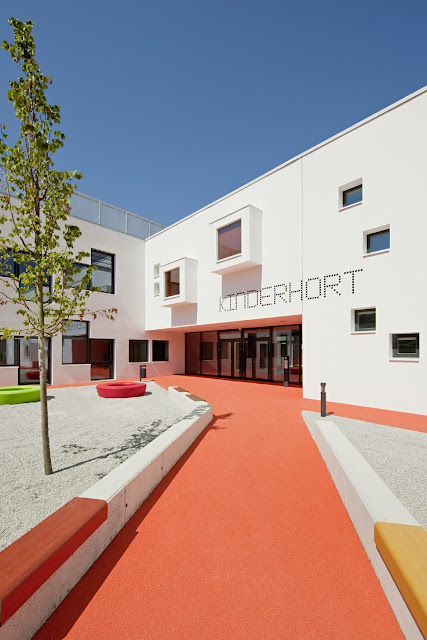 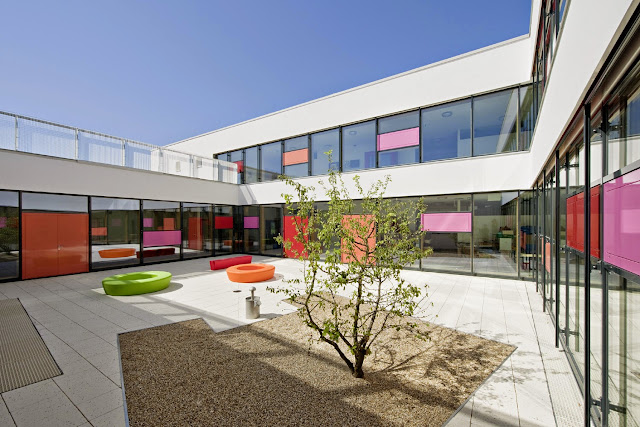 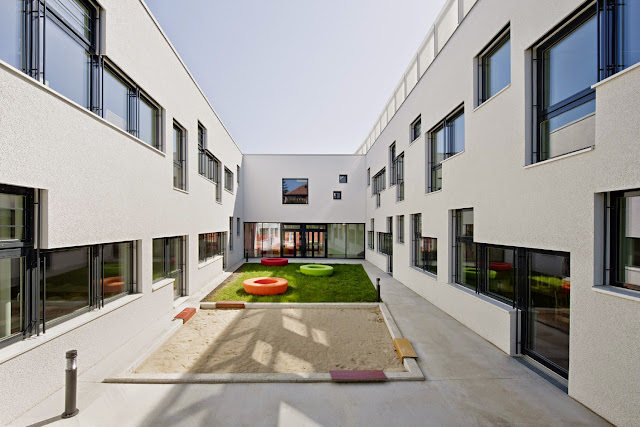 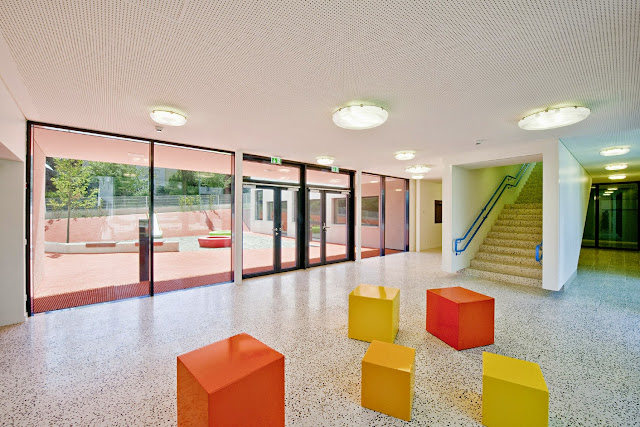 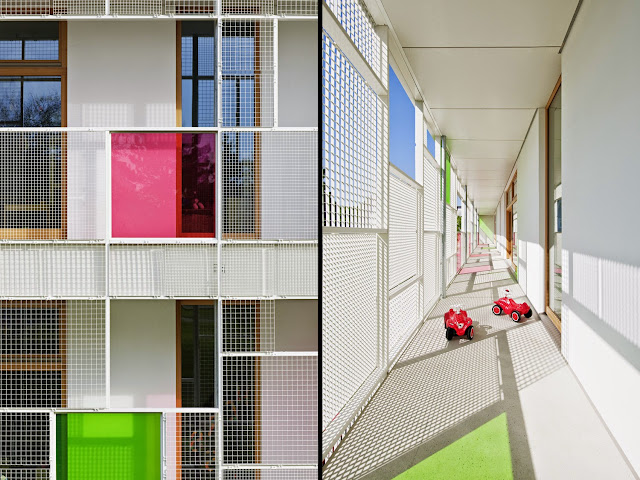 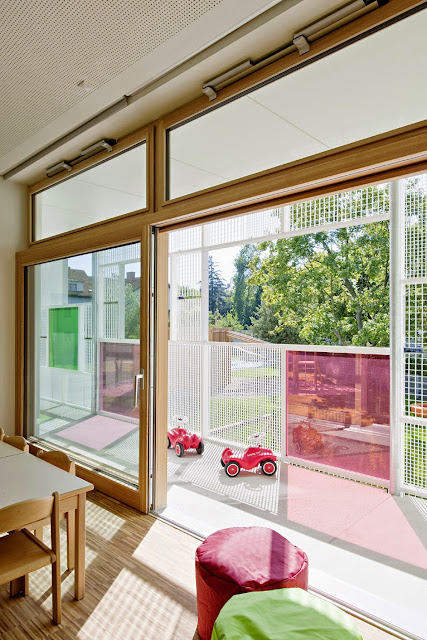 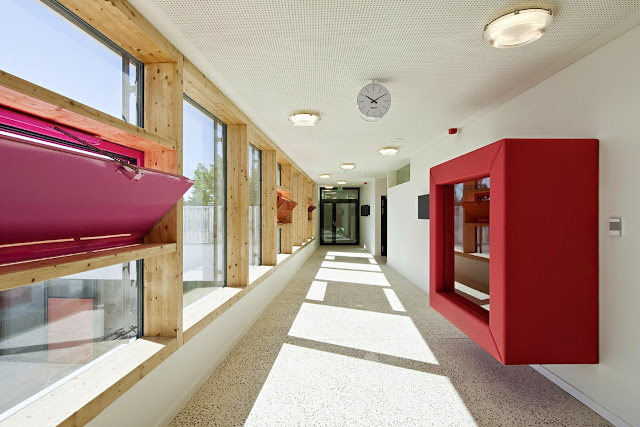 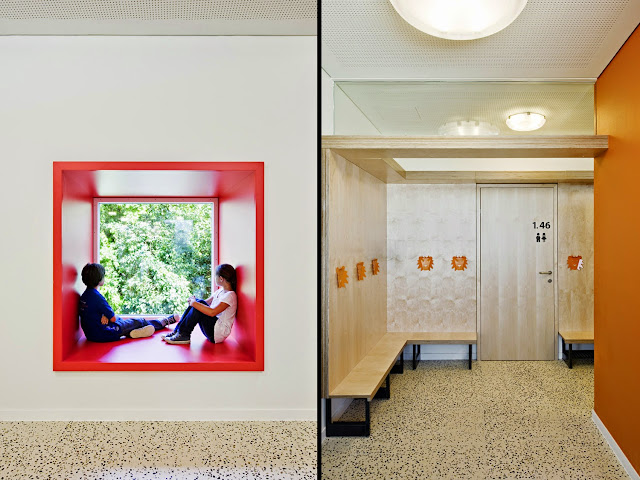 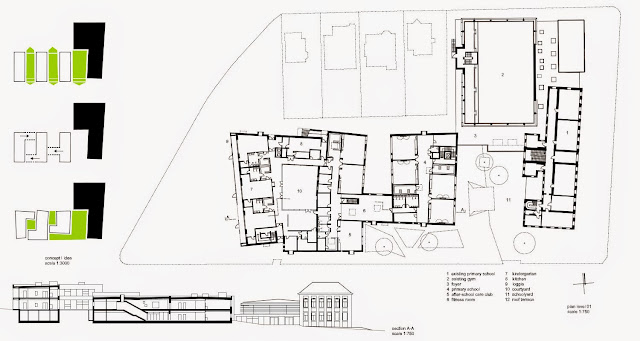