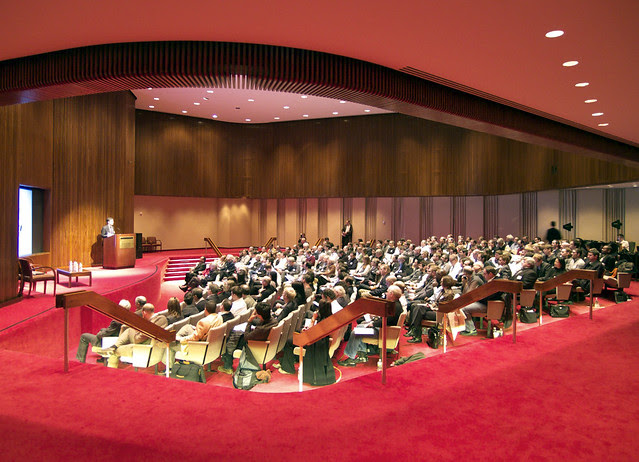 On Thursday I attended the Metals in Construction, 2012 Facades Conference, organized by the Ornamental Metal Institute of New York and The Architect's Newspaper, and held at McGraw-Hill Auditorium. Below are some brief points on some of the presentations. 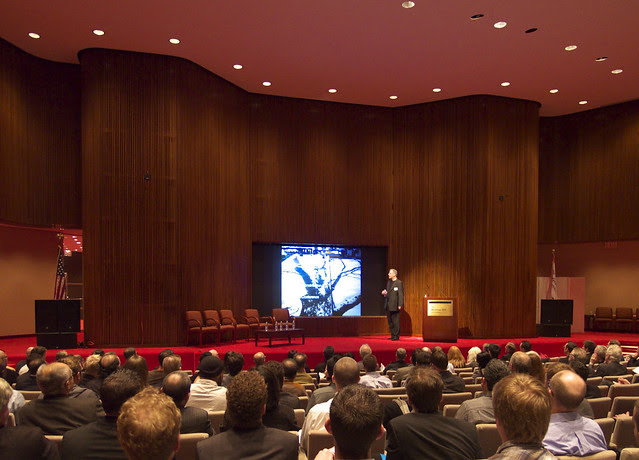 The first talk of the morning came with Bill Zahner (above) of Kansas City-based A. Zahner Company, first in the presentation of a bunch of striking projects -- many with big names (Frank Gehry, Morphosis, Zaha Hadid), but others little known outside of their Midwestern locale (St. Theresa's Academy by Gould Evans) -- and then in conversation with Julie Iovine of The Architect's Newspaper. Bill's role as a fabricator with a strong integration of digital technologies set the tone for the remainder of the day. His recurring emphasis of precision was one such point found elsewhere, rooted in the use of computer technologies in both design and fabrication. He also recounted how the nuns of St. Theresa's Academy told him he "was sent by God," which was brought up numerous times during the day. Personally I'm impressed by what Bill's company can pull off, but it seems to be a niche within architecture, what Iovine called couture projects; I'd like to see how the techniques he expounds can work their way into less flashy designs. 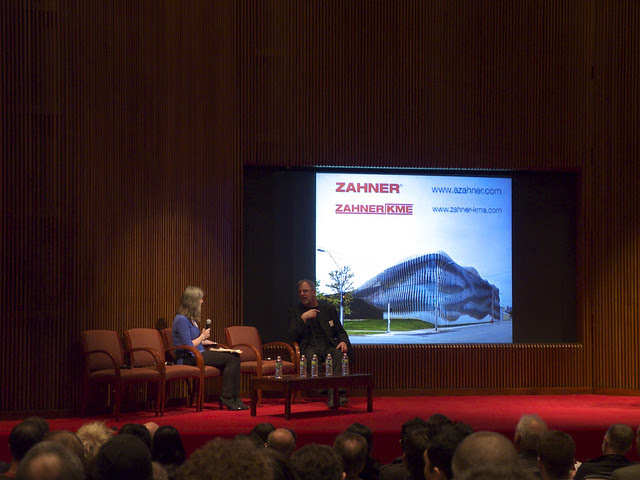 Next was Mic Patterson (below) of ENCLOS, a company that specializes in facade engineering and curtain wall design. He focused on facade retrofits for tall buildings, based as much on academic research (he teaches at UIC) as on practice. In particular he highlighted the mid-20th-century glass high rises in need of new exteriors -- due to single-pane glass and no thermal breaks -- as an important ingredient in meeting goals like those of Architecture 2030. Nevertheless he brought up the paradox in this endeavor: processed float glass is not recyclable (unlike raw float glass, which is), so the old skins are being sent to a landfill and the replacements will do the same in a few decades. 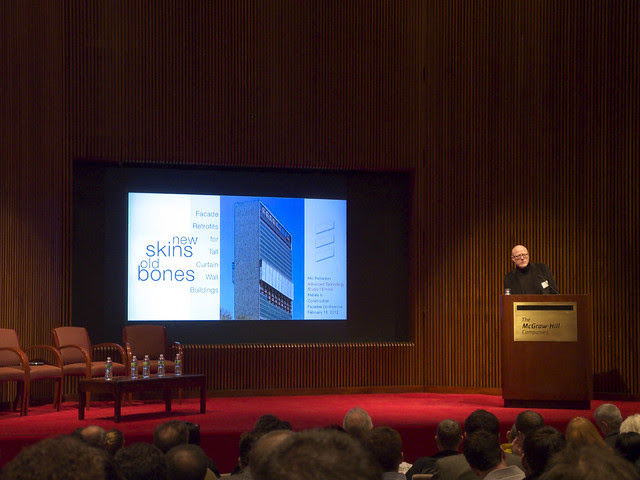 After a schmooze break came Jonathan Mallie (below), principal at SHoP Architects and SHoP Construction. He presented three projects -- Botswana Innovation Hub, Barclays Center, B2 @ Atlantic Yards -- with the largest chunk of time focusing on Barclays, the stadium now under construction as part of the Atlantic Yards project in Brooklyn. It is wrapped by a skin of glass and weathering steel, which is being installed in "mega panels" that require lots and lots of help from software like Rhino, Grasshopper, and even a custom iPhone app to track construction progress. SHoP's presence at the conference must have been mandatory, since as architects they are trailblazers in exploiting collaboration in regards to digital fabrication. They are taking their accumulated knowledge and skill even higher with the modular prefab high rise of B2, but I'm not sure the architectural appeal of the carefully stacked boxes is as high as the skillfully covered stadium below. 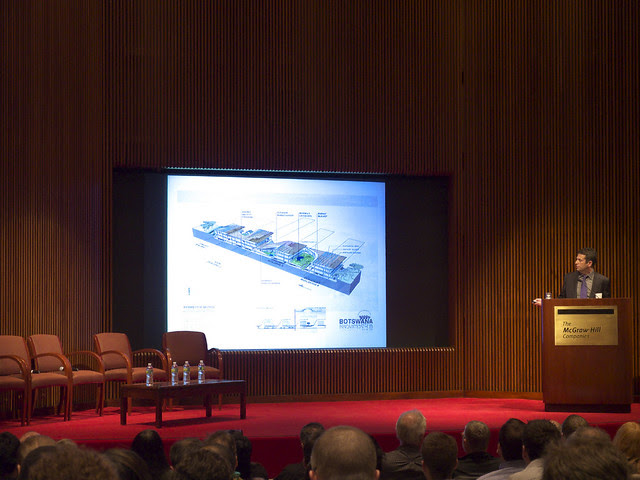 Edward Peck (below), leader of Thornton Tomasetti's Building Skin Practice, talked about active solar analysis of facades. Attempting to get the audience to reconsider a facade as merely a line between inside and outside, designed and natural, Peck presented projects with various materials and some with porous skins. While most were flashy projects, ones that could have fit in Zahner's presentation, the meat of the presentation was an analysis of a single room in a hospital with one window on one wall. Peck demonstrated how software (Grasshopper and Diva, at the very least, if memory serves me) enabled the study of 600 different louver configurations for achieving the optimum facade for both winter and summer solar conditions. The programming worked in a feedback loop, a quasi-AI process that resulted in a top ten that definitely required an architect's touch. 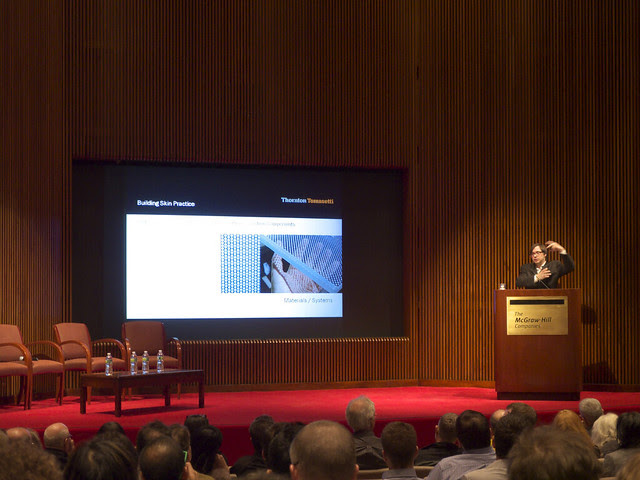 After a panel discussion (not pictured) with some of the manufacturers that helped make the conference happen (Firestone, Cambridge Architecture, Ceramic Tiles of Italy) the GSA's Dirk Meyer (below) spoke about "sustainable building initiatives and how they will affect curtain wall design." His was the only client-side presence of the day, and his concerns echoed Mic Patterson's talk from earlier in the day, in terms of retrofitting buildings from the middle of last century and the mandate to meet the White House's 2030 goals. Meyer's presentation was more business than design, but it was clear he's genuinely concerned about sustainability; to wit, the GSA's specs are in the process of evolving to incorporate performance standards to attain carbon neutrality. 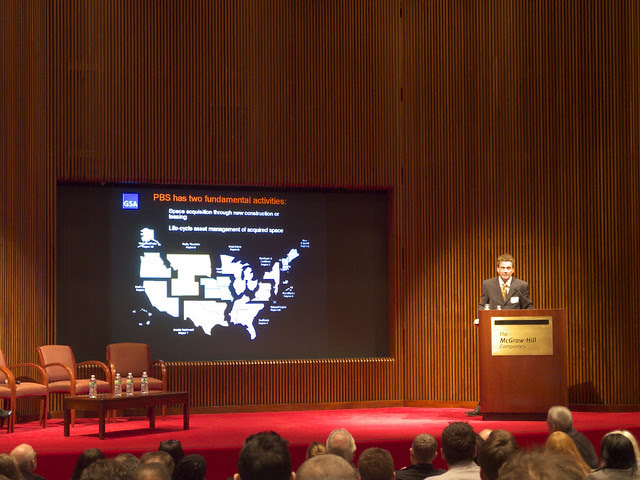 After lunch Brad Bell (not pictured), from the University of Texas Arlington School of Architecture, announced the Digital Fabrication Alliance, "a new international alliance of academics, professional designers, hardware and software developers and digital fabricators" (source), which then segued into a panel discussion on "Facade Innovation: Performance, Optimization and Integration." 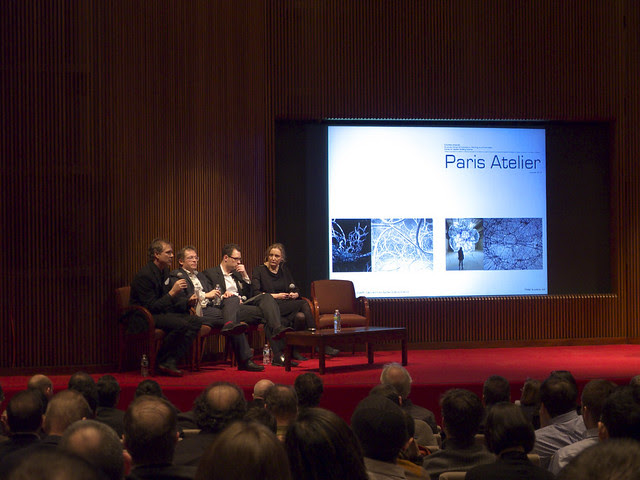 The panel included (above, R to L): Anna Dyson, Director, CASE | Center for Architecture Science, and Ecology; Erik Verboon, Technical Designer/Façade Consultant, Buro Happold; Phillip Anzalone, Director, Laboratory for Applied Building Science, GSAPP, Columbia University; it was moderated by Andrew Vrana, MetaLab, University of Houston College of Architecture, Digital Fabrication Alliance. Dyson presented her ongoing work with the Integrated Concentrating Solar Facade (ICSF), which won a DOE competition some years ago but is inching its way towards commercial availability. Verboon presented their contribution to the complex skin (made up of 380 miles of stainless steel tubes) for the Snohetta-designed King Abdulaziz Center for World Culture. Anzalone's humorous presentation talked about the efforts at GSAPP for teaching construction through experimentation with industrial tools for digital fabrication. It was a good start to the afternoon. 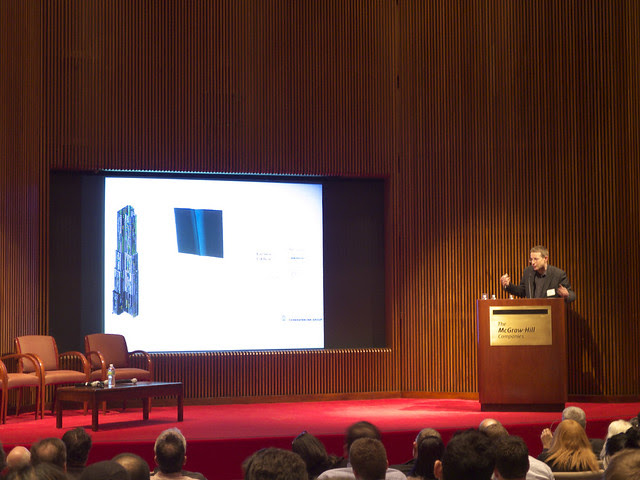 Next Dennis Shelden of Gehry Technologies spoke about 8 Spruce Street, the recently completed high-rise in Lower Manhattan that Frank Gehry designed. He explained through various diagrams how the facade dealt with restrictions of both construction and economics, mainly the latter. Facade sections were either flat ($), complex ($$), or special ($$$), with the majority in the first and the minority in the last. Animations showed how the office came to cover the facade in this manner, plugging in the contractor's restrictions into a custom program that would work out various iterations. Shelden asserted that collaboration allows architects to deal with details like tracks for window washing rigs (a complex feat with Gehry's rippling facades), so they can be designed within a facade up front, rather than tacked on after the fact. 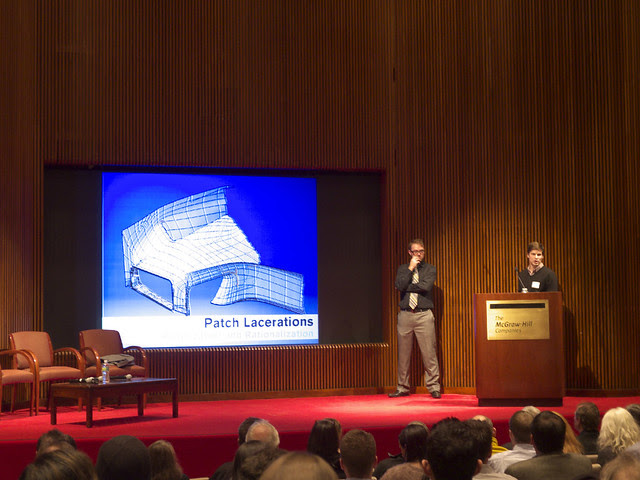 Federico Negro (right, above), Partner, CASE Building Information Modeling and Integrated Practice Consultancy, and Reese Campbell (left, above), Method Design, then discussed their collaboration on the Louisiana Sports Hall of Fame, a building designed by Trahan Architects that is now under construction. They "nerded out" with some in-depth explanations on how they developed fabrication files for the building's undulating exterior using the ever-popular Rhino and Grasshopper, among other pieces of software. 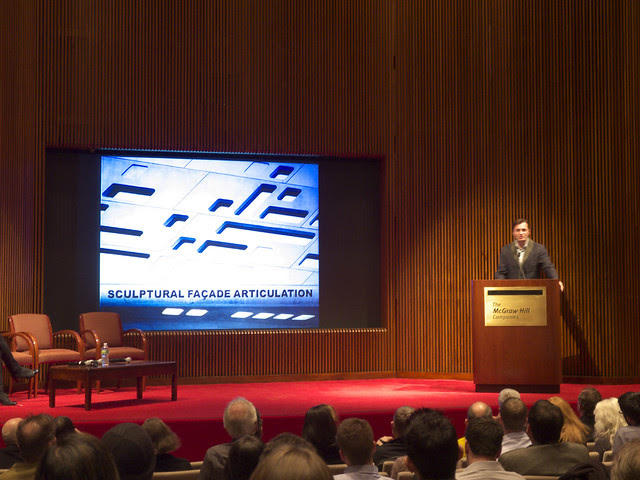 The keynote speaker was Patrik Schumacher, Director of Zaha Hadid Architects. He zipped through a bunch of projects that exhibited Hadid's signature curving forms, all the while highlighting the various materials (concrete, aluminum, fiberglass, GFRC, GFRP, composites, glass, wood) that give shape to their buildings. Seeing one project after another in the compact presentation I was amazed to see how much Hadid's office has realized since the Vitra Fire Station back in the early 1990s. One project he showed was the CMA CGM HQ in Marseilles, the office's first tower: The glass form curves as it reaches the base, displaying the concrete structure that follows the skin. Some projects under construction were also shown, most notably a house in GFRC that resembles the earlier Bergisel Ski Jump, and the striking Heydar Aliyev Centre in Azerbaijan, set to open in May. 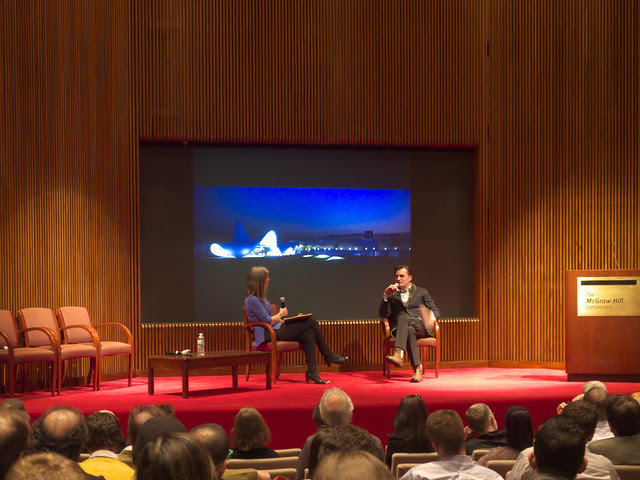 In conversation with Iovine (above), Schumacher related the parametric modeling required to realize Hadid's projects to contemporary culture (see The Architect's Newspaper Blog for some quotes from their write-up of the conference), but any justification fell by the wayside after the onslaught of sensual images that preceded the discussion. Ending the conference with Schumacher showed the potential of collaboration and digital technology/fabrication, but it kept it rooted in high-profile commissions that only a few select architects can accomplish.
Email Post