Coverage of Archaeological Ruins of the Abbey of St. Maurice 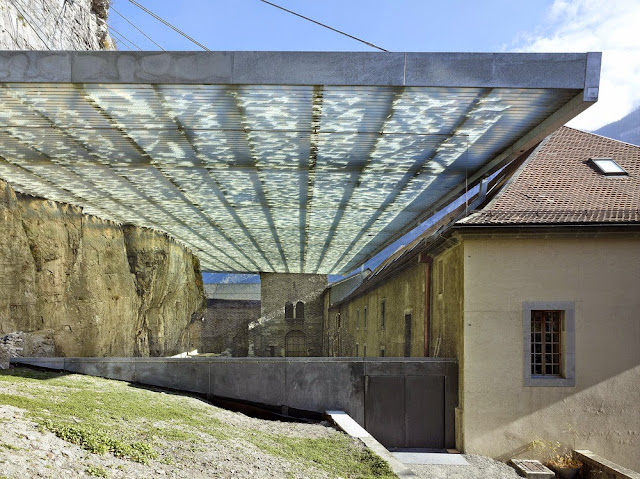 Coverage of Archaeological Ruins of the Abbey of St. Maurice in St. Maurice, Switzerland by Savioz Fabrizze Architectes, 2010

In architecture an interstitial space can be simply defined as the space between two objects, be they buildings, walls, or a floor and a roof. Of course this doesn't get at what makes an interstitial space different than any other space, or what makes them special. I'd offer that an interstitial space is one that is bound by something new opposite something old, and often fairly narrow or stretched in shape. Most that come to mind are formed by walls, such as gaps between a new construction and an old neighbor, but interstitial spaces that result from horizontal planes old and new are quite special, as this new Coverage of Archaeological Ruins of the Abbey of St. Maurice by Savioz Fabrizze Architectes attests.

One that immediately springs to mind is Bernard Tschumi's Le Fresnoy Art Center in Tourcoing, France. In that mid-1990s projejct a series of old buildings are capped by a huge roof pierced by large openings; the space in between is occupied by catwalks and other platforms. More immediate precedents to this project in St. Maurice are Sverre Fehn's Hedmark County Museum in Hamar, Norway; Peter Zumthor's Protective Housing for Roman Archaeological Excavations in Chur, Switzerland; and another Zumthor project, the Kolumba Museum in Cologne, Germany. Each of these buildings covers old ruins, existing as a means of preserving and appreciating them.

Yet there is a simplicity to the design by Savioz Fabrizze Architectes that makes it a refreshing departure from those earlier precedents; as well the cliff side that abuts the ruins further gives the space a unique presence. The cliff and the ruins are strongly linked: the cliff gave added security to the abbey that was built 1,500 years ago, but it also spelled destruction for the latter in the form of rocks falling on the building. The architects strove to express this history and the threat of destruction that came from siting the abbey next to the cliff. They covered the suspended roof with 170 tons of stones, like an elevation gabion plane.

Combined with the translucent surface on the underside of the covering, the effect of the stones is a soft, filtered light. A consistent pattern is made by the stones amongst the framing, making the reading the architects intended fairly straightforward. Yet without knowing the background, the effect is remarkable. The jagged cliff and and ruins are countered by the gridded plane overhead; its structural supports are hidden, ironically anchored into the cliff that spelled the abbey's doom.

Photographs are by Thomas Jantscher. 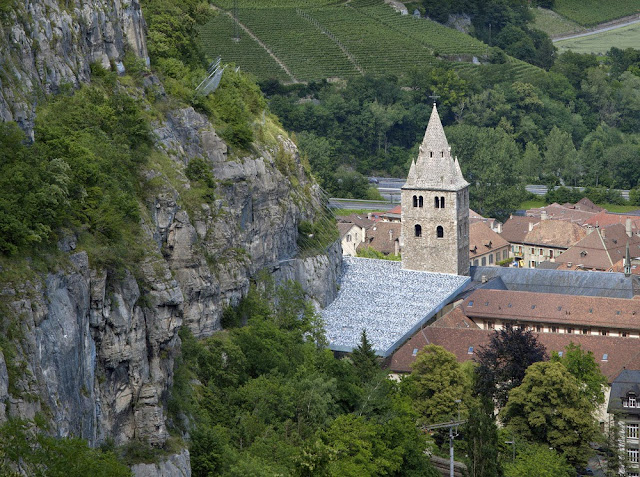 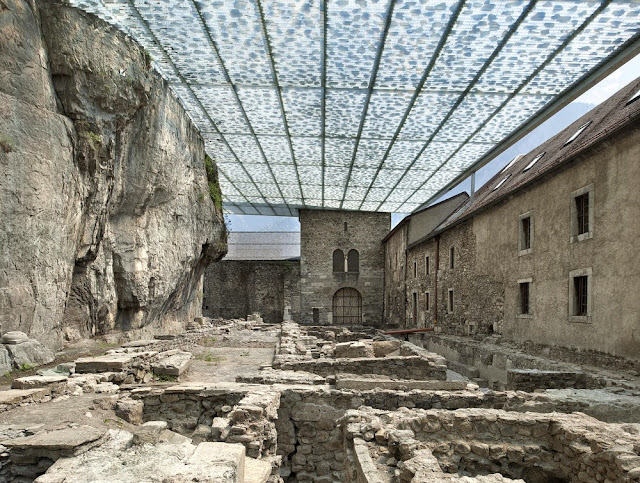 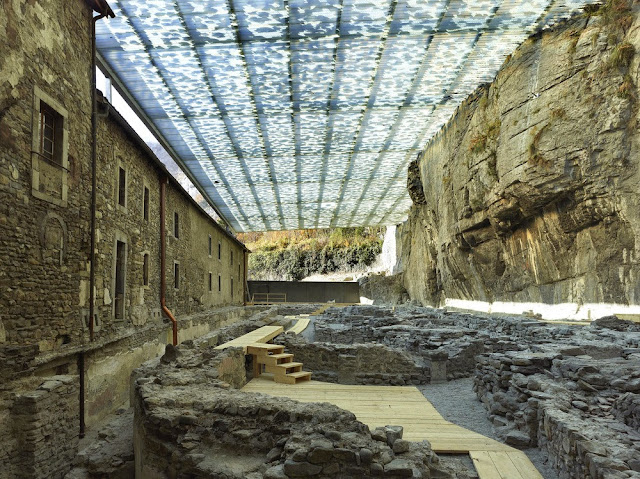 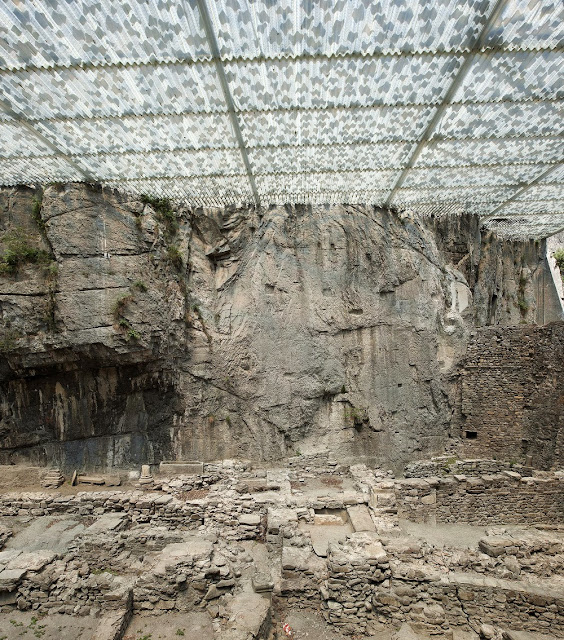 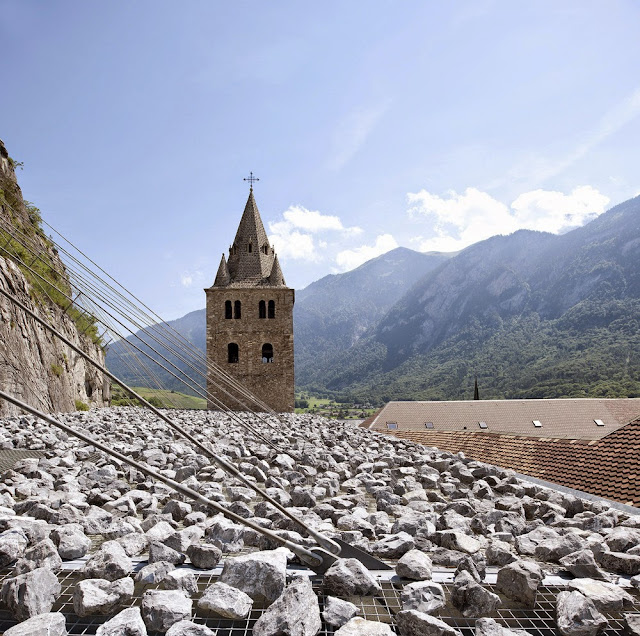 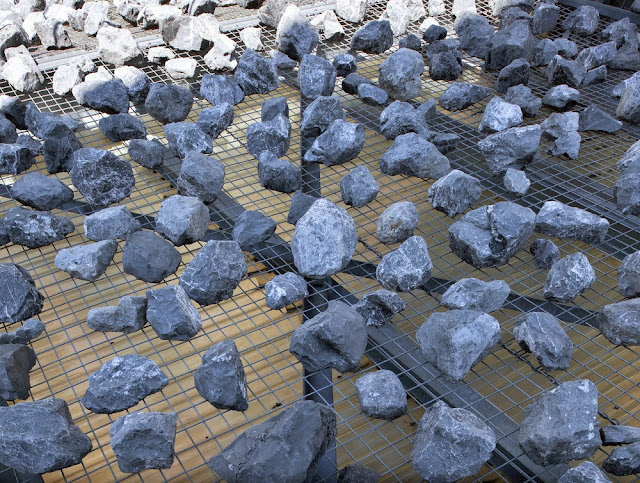 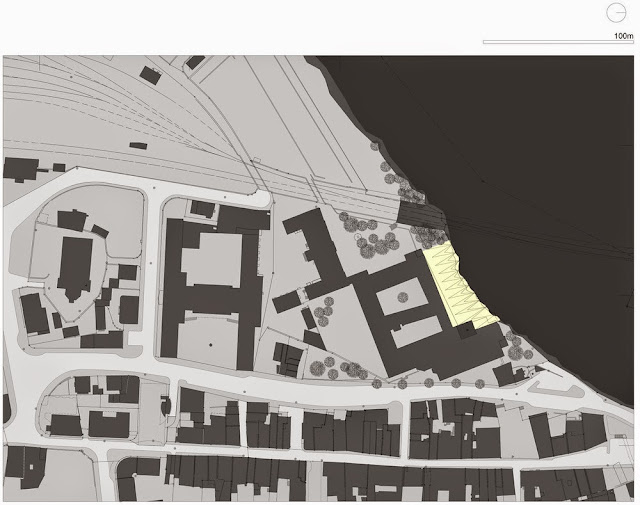 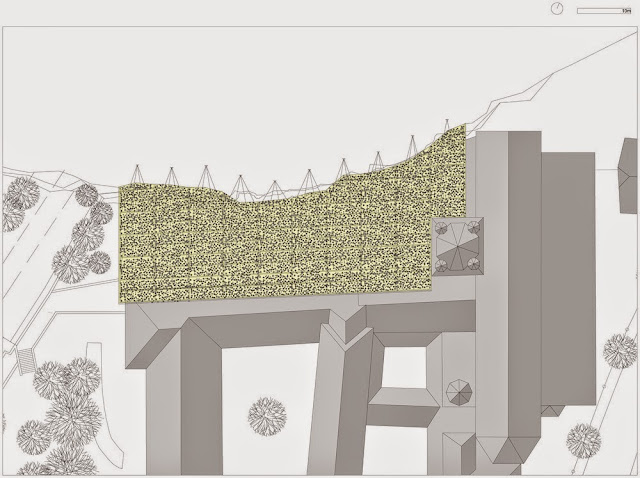 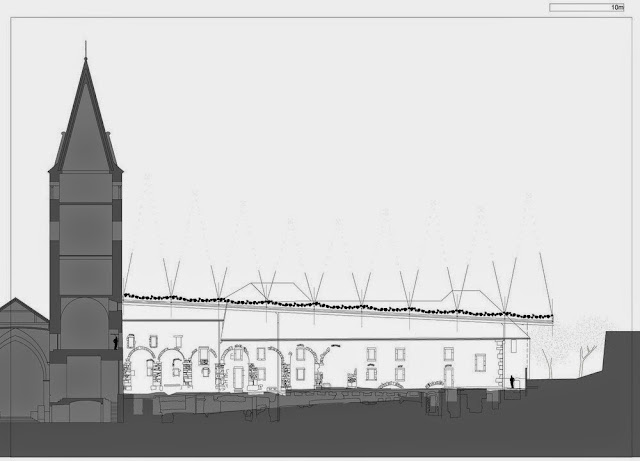