The Good Wife...All Over Again

A little over a year ago I blogged about a scene in CBS's The Good Wife in which a clip from Groundhog Day was inserted amongst original footage for the show. That Good Wife scene takes place somewhere within or near Chicago, but the Groundhog Day scene is set in Punxsutawney, Pennsylvania. Yet in reality the rest of the former's scene was actually shot in New York City (it looks like Queens, but I'm not sure), and the latter was actually filmed in Woodstock, Illinois, closer to the fiction of Good Wife than where the TV show is actually made. In both cases the filmed reality is being passed off as somewhere else. This isn't surprising to anybody who knows how TV and film or made, or to people who pay even a little bit of attention to moving images, but it still interests me. 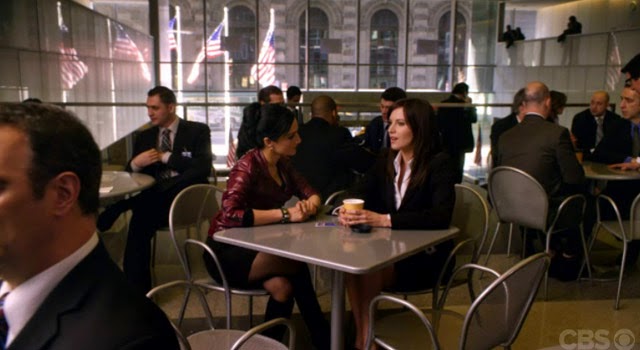 Some more of The Good Wife passing off one place for another came in Sunday's show, "Blue Ribbon Panel." Kalinda (left above) meets an FBI agent in what is supposed to be some sort of Fed cafeteria, but seeing it I knew it wasn't DC or Chicago. Since they shoot the show in New York City, my first thought was, "what kind of modern/contemporary space of that scale exists?" And my first answer was "MoMA." But that museum is not across the street from a neoclassical facade framed in such a manner. So what is? Well, the John Jay College of Criminal Justice by SOM, of course. The building across the street is the old IRT Powerhouse by McKim, Mead and White. Exhibit A: 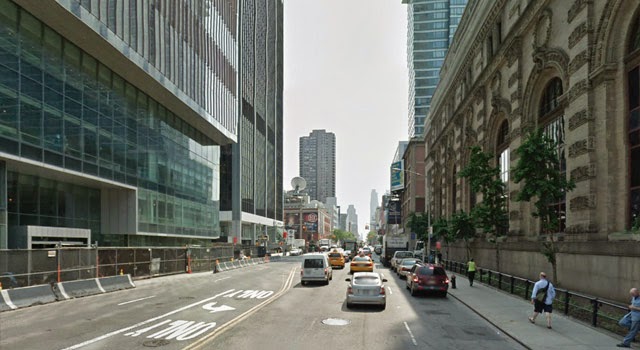