On Thursday evening Rem Koolhaas and Hans Ulrich Obrist spoke at the New York Public Library with NYPL Live Director Paul Holdengräber. After an introduction by Holdengräber, Koolhaas and Obrist gave brief presentations on their book Project Japan: Metabolism Talks. The three then engaged in a conversation that focused on the book, but which meandered into other territory, such as manifestos, film, libraries, and the act of interviewing itself -- Obrist is known for his marathon interview sessions held at the Serpentine Gallery, where he is Co-Director. Below is a transcript of a small portion of the conversation after a brief recap of the presentations. The evening reached nearly two hours from when I turned on my recorder to when I hit the stop button. 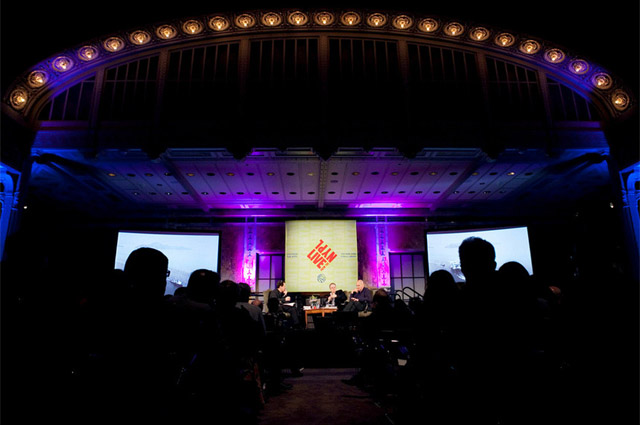 Koolhaas's slideshow presentation described what they wanted to do with the book. He traced the beginning of the Metabolist Movement -- "maybe the first non-Western avant-garde movement" -- to the Japanese incursion of China, where they confronted wide open spaces and therefore started to consider how to organize life from scratch, of course referring to the end of World War II. Grappling with tradition and the new was a concern of Metabolist members, particularly Kenzo Tange, "a builder and thinker" with a strong influence on a younger generation.

Also important in the movement was Kisho Kurokawa (his Philosophy of Symbiosis is one of my favorite books), who was given more media attention than any other Japanese architect of his time as host of a long-running TV interview program, as well as being portrayed in print advertising "like a fountain that never stops gushing." Yet even with ads focusing on Kurokawa's postwar masculinity and sex appeal, Koolhaas contended that all the media attention was more serious and superior than now, since "the more attention architects get today the less they are taken seriously."

Koolhaas also spoke about the solidarity amongst the various Metabolist members, contrasting it with today's relentless environment of competition: "They could stay together and be individuals working in a movement." Koolhaas then linked the state with imagination -- "two words you don't typically hear together." At the end Koolhaas departed from Japan's national condition to the Arab world and the 1973 oil crisis, which created a new career for Japanese architects (below) who could plan the Arab future on a large scale, "giving us a first picture of a world without Western architecture." 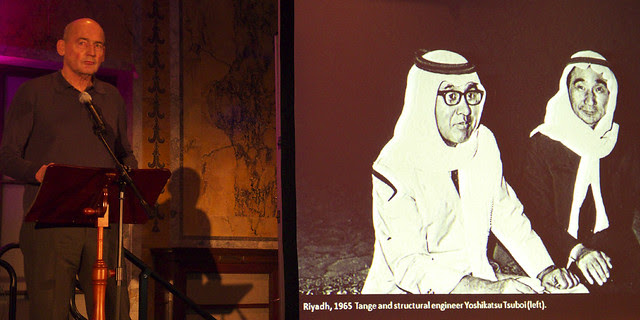 Obrist traced the book project back to the conversations he and Koolhaas had at the Serpentine Gallery Pavilion Koolhaas designed with Cecil Balmond in 2006. The marathon sessions -- literally nonstop for 24 hours -- looked at a polyphony of fields and voices, and led to the desire to make a book about a polyphonic movement. The first choice, Fluxus, gave way to Metabolism, which Koolhaas had dealt with during his research on Singapore in the 1990s (his essay "The Singapore Songlines - Portrait of a Potemkin Metropolis" is part of S,M,L,XL). Further, the Serpentine's "mixing chamber" of arts and other disciplines was echoed in Kenzo Tange's genesis of the movement in 1959. Obrist charted 1959 as a special year, the start of many revolutionary things: microchips, the pill, the space race, Motown.

Obrist then talked about the production of the book, particularly the first interview and the last. In the former they were taken aback when Kiyonori Kikutake, instead of immersing them in a futuristic ideas, talked about the Ise Shrine and Katsura Villa; memory and tradition were made explicit as ongoing concerns in this first visit. After seven years of interviews -- all are recorded on video and most of the transcripts are not in the book, making the project much greater than the book -- Koolhaas decided they needed to speak with widows of Kenzo Tange, as they did not have the chance to interview the Metabolist founder before his death in 2005. These interviews mark the end of the book's oral production, which also includes photos of surviving buildings by Charlie Koolhaas and a book layout/design by Irma Boom that holds it all together. 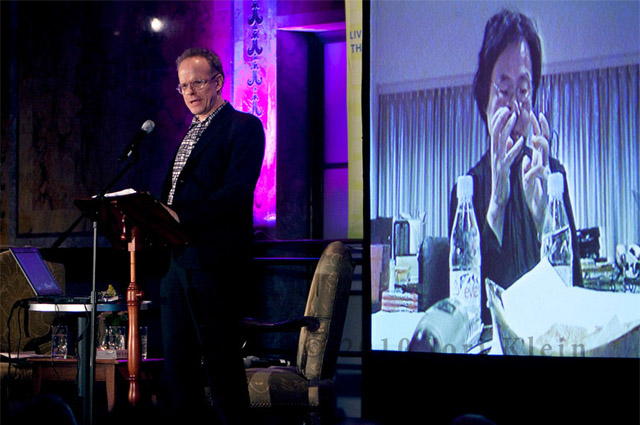 And now a few snippets from their conversation with Paul Holdengräber.

Paul Holdengräber: When you approach a subject such as this one, what does the sum of you two offer that alone you would not get?

Hans Ulrich Obrist: I suppose it's something which started with the first interviews we did together, the first was with Philip Johnson here in New York. I'm not an architect, I'm based in the art world, so for me it's going into another world, it's a learning process. It has a lot to do with the fact we ask very different things in these interviews, and that adds something. Also the idea that "two's company, three's a crowd" creates another kind of dynamic to the conversation. And one of the things that is also exciting is the idea of learning together about the topic; we want to find out everything. Yea, one plus one equals eleven.

Rem Koolhaas: I would characterize the specific ability of each of us. I'd say that Hans is a genius in discovering, and I am typically pursuing an intuition or a theory, and then trying to narrow it down. I think that is why it works in the book, ... Hans's intense ability to try and delve into where you sense there's a secret. 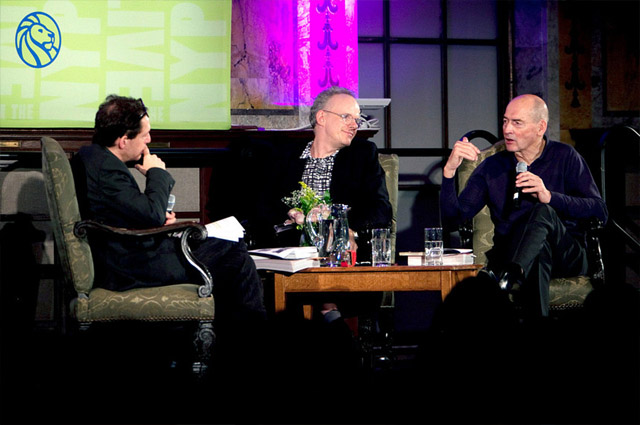 PH: You say, "Metabolism was a Japanese avant-garde that engineered its appearances on the world's stage 50 years ago and disappeared 25 years later in the bonfire of neoliberalism." 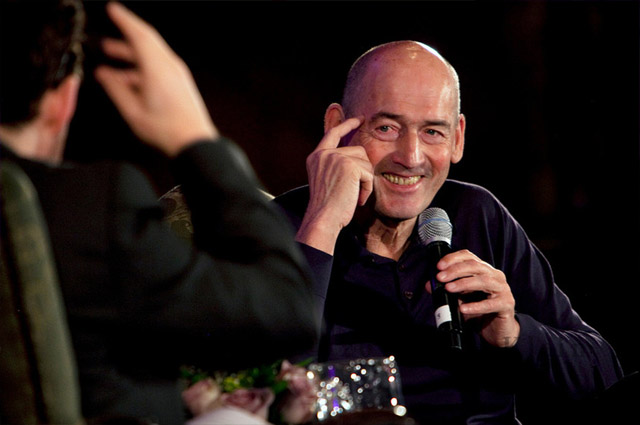 RK: I was hoping you'd ask me, "what is a manifesto?" [Laughter]

PH: Let me ask you, what is a manifesto? [More laughter]

RK: For me a manifesto is compelling speculative vision that is articulated with such selective sharpness that it becomes attractive. With my generation the whole idea of a manifesto has become almost unthinkable. I think that it has to do with the violence of the 20th century. ... When I came to New York, or when I found myself in this situation, I had the genius idea where I saw that in Europe there are many manifestos but no realization. New York was realization without manifesto; that why as an expedient strategy I wrote a retroactive manifesto (Delirious New York) where I could claim New York as evidence. [Laughter]

PH: Is this [Metabolist] book an attempt to set the record straight? And is Project Japan simply put a manifesto? 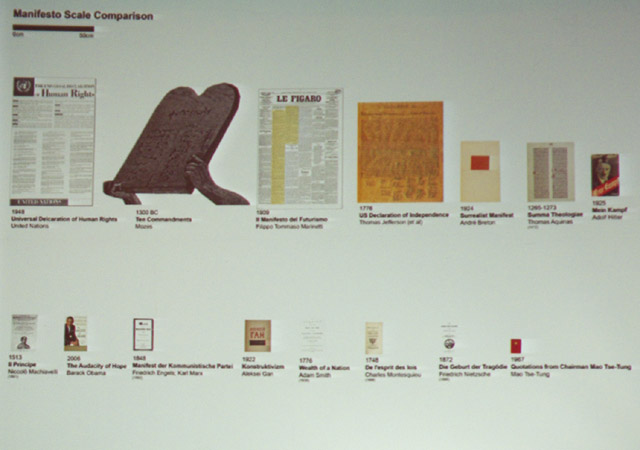 RK: I was really fascinated -- we asked ourselves the question, "how is it that it still means something to identify somebody as a Japanese architect?" And how does it become completely meaningless to talk about a French architect, an American architect, a Belgian architect, a Dutch architect. We were baffled by that. ...

PH: I don't quite understand what you mean when you say it doesn't make sense to call somebody a French architect, why the identity there doesn't seem to work.

RK: It's just my observation. If you look at our work it could be French, it could be Turkish, but it could never be Japanese. It's my own; it could be Russian, but never Japanese. Maybe it's the ongoing, continual relation with tradition. Our countries have abandoned tradition as a kind of virtue, but I think Japan has always resisted doing that in a clever precaution against rules of identity.

[A related question from the audience after the conversation:]

Audience member: Within the context of globalization and Western society -- when you step into the New Museum or another SANAA building in the West -- does Japanese architecture still have its embedded cultural characteristics, or is it just a style?

HUO: I've just been to Lausanne [Switzerland] to visit the Rolex Learning Center ... one of SANAA's most recent projects. It's a place for reading, a place for books. For me it's a great example of what Édouard Glissant says, the great theoretician, thinker, philosopher. He says the theory of Antillanité is a global dialogue which produces difference, which goes into a local complex yet maintains its own identity. And that obviously grew for Édouard Glissant of his background from Martinique, where he actually studied very thoroughly the idea of the archipelago, of all these islands, and the way identity is totally formed by interaction which each other. And it's extremely interesting to look at this building of SANAA, which is I think one of the greatest pieces of architecture of the 21st century, because I'm Swiss and for me it was a total Swiss experience. ... Yet at the same time it's a completely SANAA building, it's totally Japanese. So I think it's a great example of how architecture can achieve that. And if you haven't been to Lausanne, it's incredibly urgent. [Laughter] 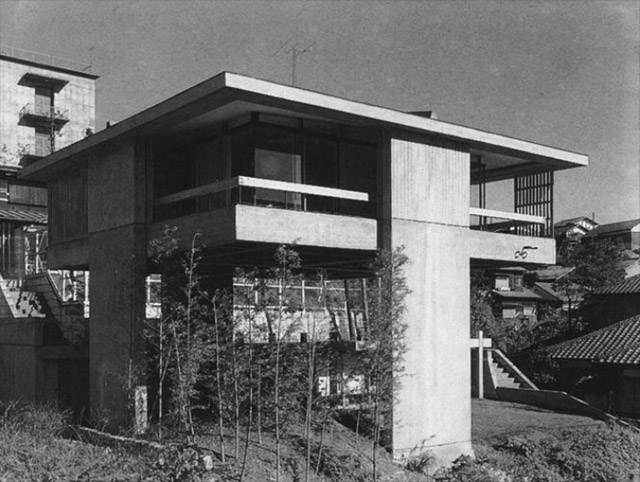 PH: If we could show the image of the Sky House [projected image is similar to above]. Please comment as you like.

RK: For me it is quite a painful moment, because so far we've been able to give the impression that architecture is a serious profession. If I now have to explain what the idea of this house was, it becomes a lot more dubious. Because the idea was to put the house on stilts and to use the space underneath the house to hang small capsules for the children of the family. So for a considerable time, like nests of bats or bees, kind of pockets draping from this kind of ceiling where the kids lived. [Laughter] It wasn't long before the kids became too big and slowly dissatisfied with their isolation, maybe they wanted to join the main floor. So twenty years later or even fifteen years later, now that whole underside is hidden behind etched glass walls so that you cannot actually see it anymore, and we actually verified that the son claimed that entire area and is now living there in extreme modern comfort.

PH: I want to show you a clip from a movie, because I know you started your life as a screenwriter; and I'd like you simply to react to it.

RK: It's intriguing, but I don't recognize it. 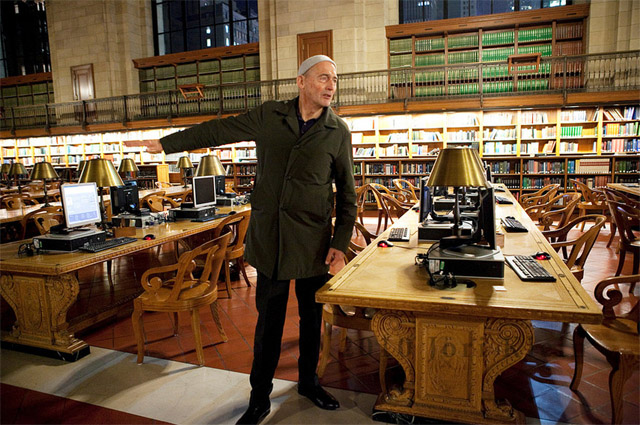 PH: Before coming here tonight in this room we went to visit the Reading Room, and we went to visit some of the special collections. When we entered into the room both of you were incredibly struck, somehow enraptured, in awe. And libraries, since we're in one here, have mattered to you greatly. I'd like to ask you to talk a little bit about libraries; Rem, you might also want to talk about the library you built in Seattle. But the Reading Room in particular, you were there, we went upstairs, you saw it, somehow for a brief moment you were speechless.

RK: I speak not as a writer but as the kind of architect I am. I'm deeply aware of the misfit between my profession and the current moment. There is an enormous amount of technology that undermines the legitimacy of building or physical space, and so I'm deeply aware of the vulnerability of architecture as a plausible activity or discipline. And for that reason -- I became aware of this in the 90s -- what I think architecture can still do, or ought to focus on, is to represent moments where collectivity is an attractive experience rather than an imposition. For me libraries have that incredible quality. Each of us can be motivated by our own motivations, but nevertheless sit together in a room like that, that is an exceptional experience of sharing even though you are completely alone. That is for me what the most interesting part of architecture can be.
Email Post