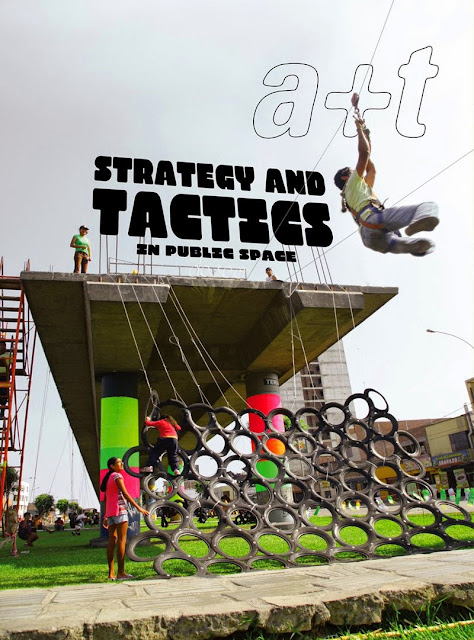 The third installment in a+t's Strategy series takes aim at an increasingly popular subset of architectural design: tactical urbanism, D.I.Y. urbanism, provisional urbanism, whatever one wants to call it. As I also mention in this week's dose, a trio of actions in Brussel's Red Light District by Alive Architecture, it can be defined as the localized, bottom-up approaches and subsequent interventions for small pockets of urban space around the world. Proof of its popularity lies in books like this one, which document and theorize the fairly uneven terrain of tactical urbanism (the preferred term I'll use here).

As the name of a+t 38 implies, the issue is split between strategies (space-based landscape urbanism) and tactics (time-based interventions). This split arises from Michel de Certeau's The Practice of Everyday Life, which articulates tactics as "actions which take place on enemy territory" while strategy "is always enacted on home ground" (quotes from the editorial). Javier Mozas explains the strategies, tactics, and their differences in his introductory essay, ultimately trying to explain how tactical urbanism acts on public space; not an easy feat. While I'll admit my reading on tactical urbanism is lacking, I think it is an area that by its nature abhors theorization, outside of the basic structure of bottom-up, designer-generated plans responding to an immediate need. Attempts will be made to provide a theoretical framework for tactical urbanism, but one if its defining characteristics is that it is localized and therefore unique.

One particular gray area within tactical urbanism though is the legality of interventions. For example, Mozas's essay points out Jugaad urbanism as an influential yet questionable method for pragmatic solutions with minimal means. But in the context of Tom Vanderbilt's book Traffic, which I've been reading lately, the same phrase is synonymous with bribery. In a sense, improvisatory and corrupt methods both respond to a government that is not fulfilling the needs of all of its citizens. Yet what is the result of interventions that skirt the larger participatory process? Or does tactical urbanism call the process into question, pointing out the deficiencies of governments in addressing the needs of the underserved?

One complication of tactical urbanism is that its presentation differs noticeably from traditional architecture. One look at the strategies and the tactics in this issue of a+t makes it more than apparent. The photos, plans, and other documentation of projects like Interboro Partners' Lent Space and Rural Studio's Lions Park are more immediately appealing than the project lumped under "Tactics". Exceptions to this can be found, but the general idea is that tactical urbanism is more persuasive when experienced, its qualities often harder to convey through traditional means of architectural photography, for example, which focuses on form and surface.

The cover of this issue of a+t is a great exception to this commentary. The project, a temporary amusement park in Lima, Peru, latches onto an unfinished elevated railway, using tires and other cheap or free materials. As the photo attests, the results are a successful place of fun. It is also a suitable alternative to strategies like the High Line, which are out of reach for many cities because of cost and maintenance. By showing the activity generated by the tactics, the qualities of the intervention becomes tangible, making a strong case for tactical urbanism in its various guises.