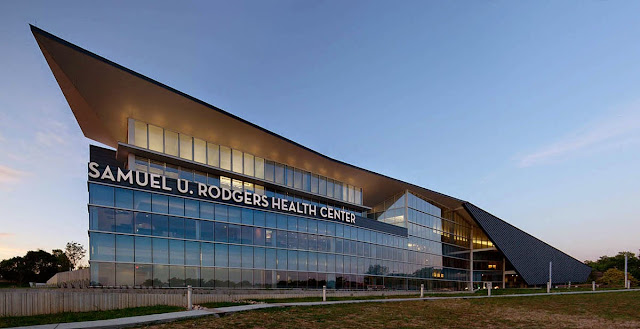 The Samuel U. Rodgers Health Center dates back to 1967 when Dr. Rodgers planned and opened "the first federally recognized community health center in Missouri-only the fourth such center in the U.S. at that time." The Health Center moved four years later to a location on Euclid Avenue east of downtown, next to which it started building a new facility a couple years after its 40th anniversary. The new 68,000-sf (6,300-sm), $25 million building is designed by Rafael Architects.

The new three-story building is located just north of the 1971 building, an unremarkable modern brick box that will be demolished and turned into Legacy Park, in honor of Samuel U. Rodgers. This park space will open up the south side of the new building, both to the sun and to views. In regards to the latter, perhaps Rafael Architects considered the future of the old building, making a dramatic elevation with glass walls and a roof that cantilevers dramatically towards downtown, a roof which turns itself down to cover the glass wall toward the east.

The articulation of the south elevation responds to the buildings linear plan, which kinks to the south and east where the roof turns into wall. This kink and the diagonal drop of the metal-clad roof/wall also coincide with one of the building's two entries, reached via a shaded walk (photo at bottom right) from a small parking area. This entrance aligns with another one on the north side, which is under a dynamic, folded porte-cochere that reaches towards the large parking lot.

The glass curtain wall of the south side is eschewed on the north for the same gray metal panels used on the south with the turned-down roof. The minimal, colorless palette outside is countered inside with wood, patterned wall coverings, and white surfaces. The effect is light and warm interiors, aided by the generous glazing on the south that is tempered by mechanical shading. Further, the Health Center attests to "a culturally sensitive way-finding system for patients," but that is not something visible in the photos here. Regardless it's evident the Samuel U. Rodgers Health Center is a well-considered design that responds to the needs of the patients and staff as well as the surrounding community, going hand in hand with its mission.

Thanks to Aaron Dougherty for letting me publish his photographs and for bringing the project to my attention. 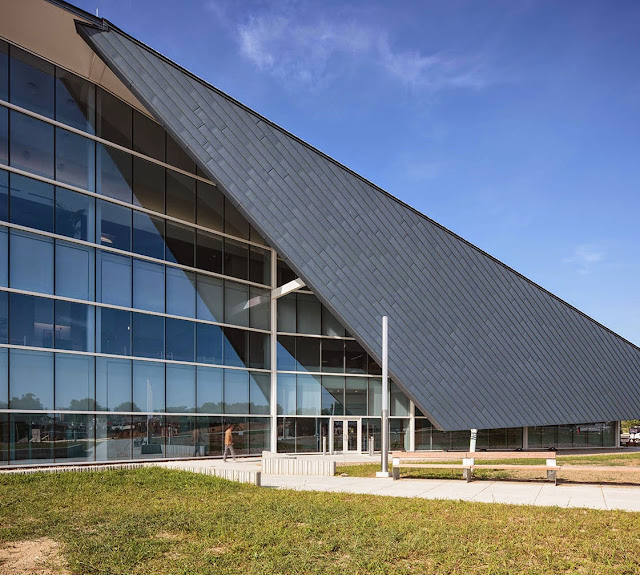 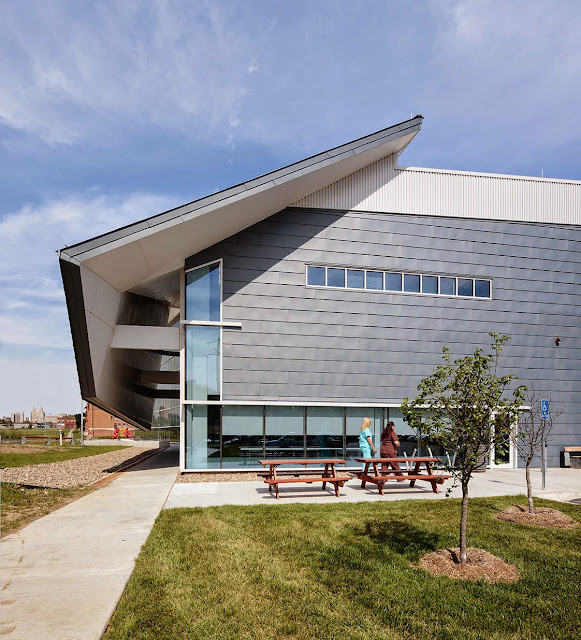 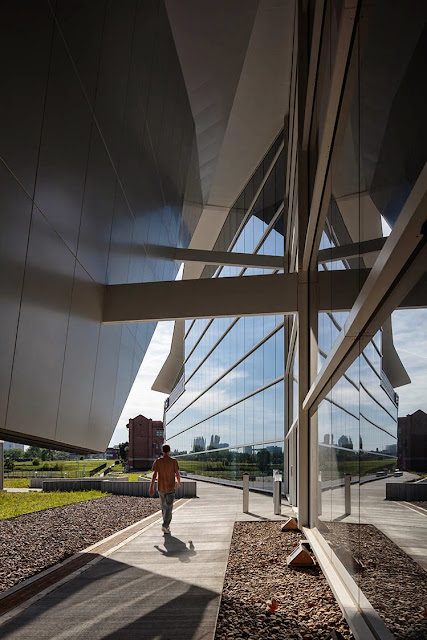 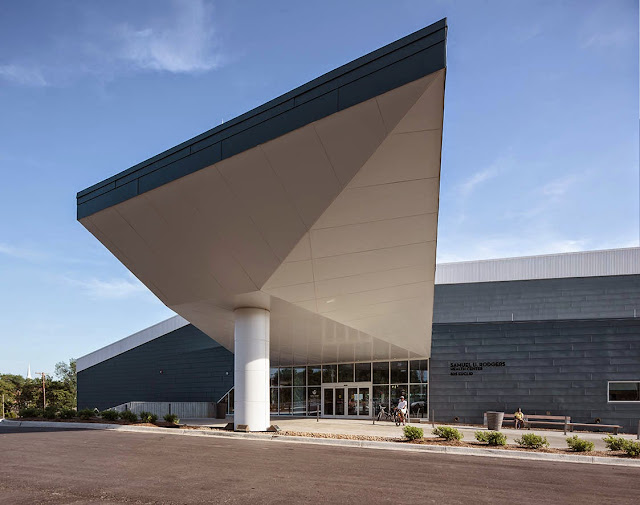 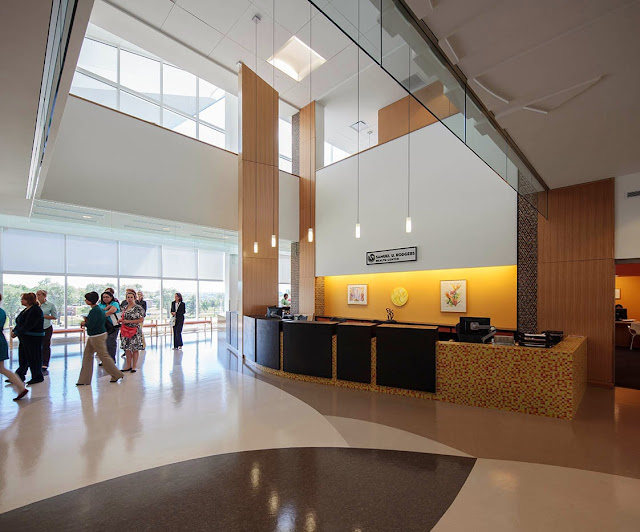 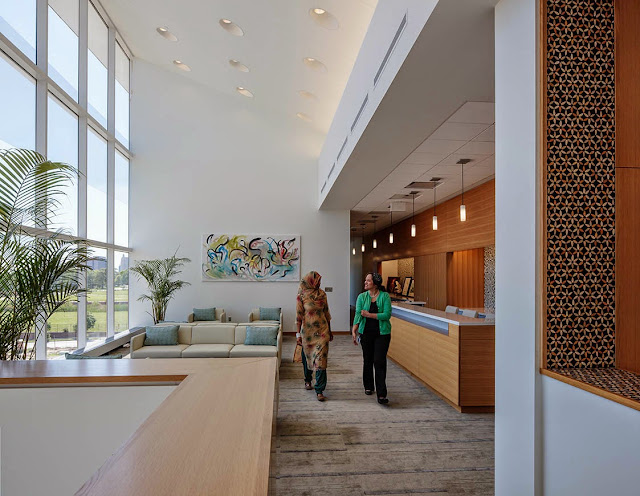 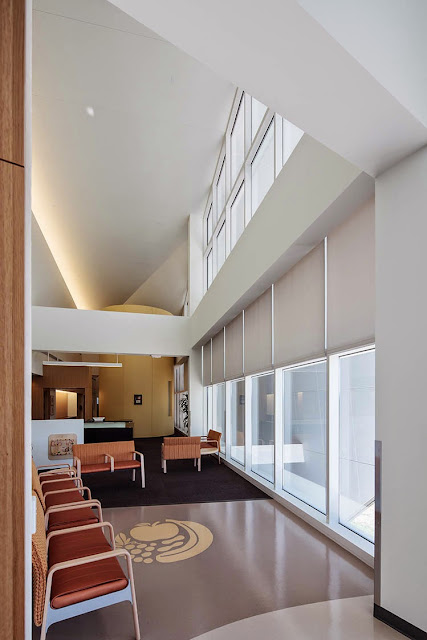 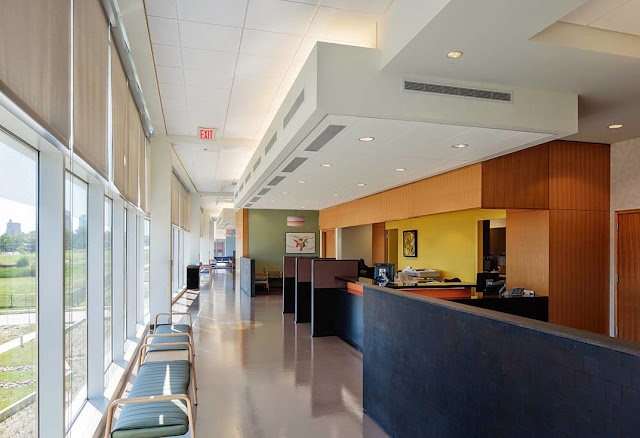