I must admit I was baffled upon seeing this ad for Zurich Service Corporation on the back page of The Atlantic. 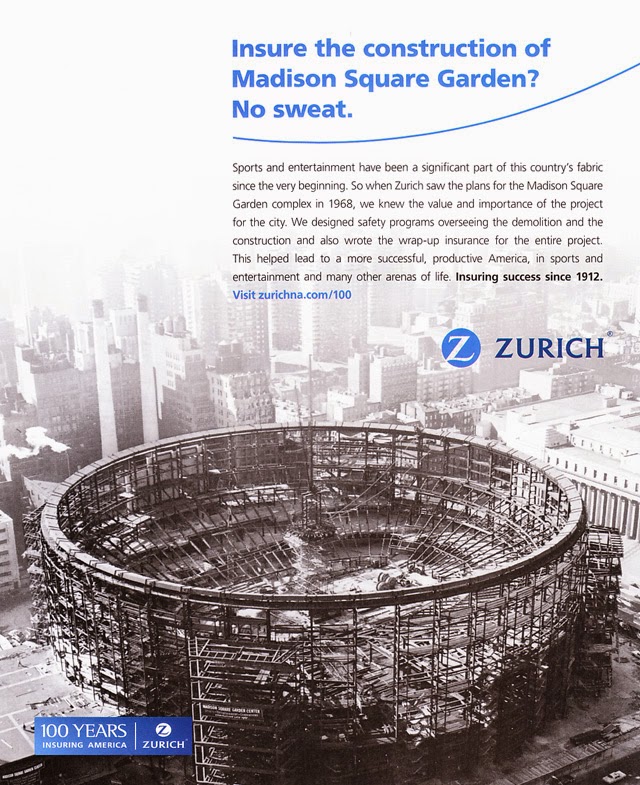 After all, Madison Square Garden is the increasingly unloved replacement for the much loved (often nostalgically) Penn Station, which was demolished in the mid-1960s to make way for the circular sports arena. Recently even, New York Times critic Michael Kimmelman has called for moving the Garden, saying that the "present arena is a flimsy, aging eyesore." For his predecessor, Nicolai Ouroussoff, it was tops on a 2008 list of candidates for demolition in which he called the Garden "cramped and decrepit."

Most people hate the Garden for what it did to the remains of Penn Station underneath it -- "one of the city’s most dehumanizing spaces: a warren of cramped corridors and waiting areas buried under the monstrous drum of the Garden", again Ouroussoff. The Garden may be an eyesore, but remove if from atop one of the busiest transit hubs in the world (Penn Station is home to Amtrak, Long Island Railroad, New Jersey Transit and two MTA subway lines) and its negative qualities drop significantly.

Nevertheless I'm still baffled that an "insurance-based financial services provider" would take pride in the construction of Madison Square Garden at time when people seem to loathe it more than ever. Perhaps being located in Europe they have a hard time seeing the building for what it means to many people in New York City and the United States.
Email Post
Labels: arch-advertising