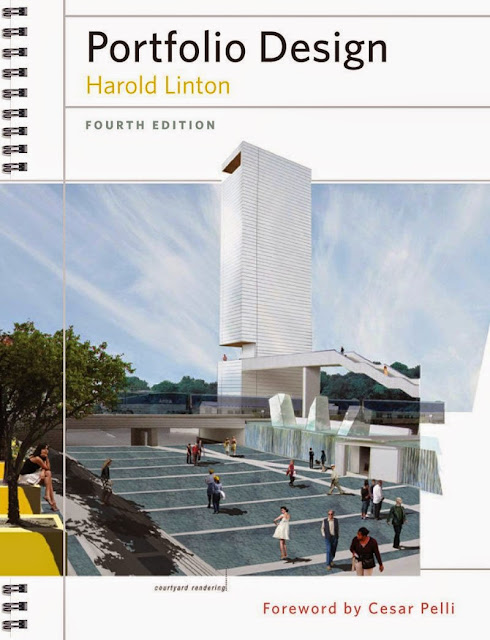 Harold Linton's Portfolio Design was first published in 1996. I remember referencing it as I assembled my portfolio after graduating from undergraduate architecture school the same year. A lot has changed in the last decade and a half, much of which has influenced the shape and form of portfolios. Design work is produced in the computer, rather than by hand; images are modified and portfolio pages are laid out with Adobe Creative Suite (Photoshop, Illustrator, InDesign) or other software; and prospective employers would rather look at PDFs or websites before considering somebody for a position, after which they can look at a print portfolio during an interview. These are not hard and fast rules, of course, but advances in computer technology, and their influence on the production of architectural design, have necessitated three new editions to Linton's helpful book.

While I don't have the third edition, I do have the second edition from 2000. Number four differs from that one most overtly by having color illustrations throughout the book, not just on a few pages in the middle of the book. Linton's preface to the new edition makes it seems that the full-color examples are also a change from the third edition. It is important that every portfolio is example is presented in color: Since the examples are basically printed versions of pages made in InDesign or similar software, what we see on the pages is close to what one would see on a monitor. And this gets at what is missing in this shift to color and reproductions of digitally laid-out pages: Very few physical portfolios are presented as examples. Linton's second edition has plenty of photos of portfolios splayed out so one can see covers, binding, and some pages. But the need to design for digital and print realms simultaneously means the emphasis is on page layout rather than the portfolio's design as a physical book. This is not to say that page layout was not important before (Linton's guidelines from the second edition are pretty much intact in the fourth edition), but the examples stress it more than before.

By staying updated with trends in producing and disseminating portfolios, Linton has kept his book relevant. This is particularly true relative to the examples given, all of which appear to be fairly new. They exhibit the influence of the computer in design as well as in assembling images and laying out pages. Overall the text is helpful in knowing how to approach the design of one's portfolio and how to assemble digital and print materials, but it's the examples that give students and architects plenty of inspiration. Things fall apart a little bit in a chapter on "the interactive environment and portfolio package." While it even incorporates recent platforms like Architizer, Linton's emphasis on branding one's identity and his rudimentary knowledge of social networking make this chapter pale in comparison to the evolving, tried-and-true chapters on portfolio design that precede it. Nevertheless the book is a great reference for students and young architects looking for work or making their portfolio fresh, thanks to Linton's efforts in finding the best examples to go with his helpful text.