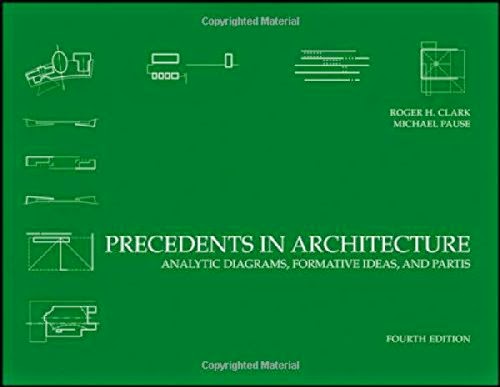 My first exposure to Clark and Pause's Precedents in Architecture was during a semester in Italy in the mid-1990s, where studio was a mix of analysis and design. An earlier edition of the book was in the small but quality library at the study center, and in its pages was the church we were analyzing. Like any student, I copied the diagrams into my sketchbook and showed them later to my professor, only to be berated for going that route, of making the analysis too simplistic. For him, analysis was not just diagramming circulation, hierarchy, symmetry, geometry, and so forth; it was a creative process, like design, that resulted in each student having his or her own take on the building. In other words, Precedents in Architecture was objective analysis and our work was subjective.

A decade and a half later, finding myself teaching a second-year design studio that included a two-week building analysis, I was confronted with the decision to use Clark and Pause's book. While I did not require that students use it, I noticed that many of them did, given that by the fourth edition the book's line weights and shadings were unmistakable. But traces of my professor's comments lingered in my mind, so for me and my students the diagrams became a step toward realizing a deeper analysis of a particular building, not an end in themselves.

The book's consistent approach to the various issues of analysis (the authors define those as structure, natural light, massing, plan to section or elevation, circulation to use-space, unit to whole, repetitive to unique, symmetry and balance, geometry, additive and subtractive, hierarchy) allows students to see a building as abstractions akin to their own design partis, as if they're seeing the project in its design stage. This is helpful in terms of cross referencing the various buildings (118 are included in the fourth edition) and finding the essences of the designs, but the tactic must be balanced by a prolonged look back at the building itself. For what is gained in the diagrams is lost in the fact that all but a few of the projects in the book are actual buildings; they exist and are made of materials and light, they sit on the earth and change a landscape. Analysis must also take these and other conditions of the built reality into account. So for students heading back to school, go ahead and pick up this new edition of the classic book, but realize that architects have dealt with issues beyond what Clark and Pause define, so there is much, much more to be discovered.