Book Review: The Shape of Green 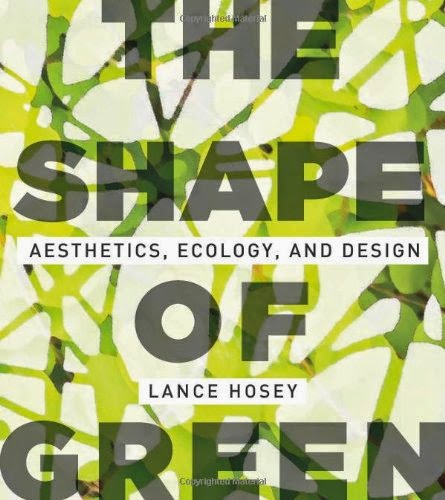 Books on sustainability and sustainable architecture are so numerous today that one needs to have a strong slant on the topic in order to stand out from the crowd. It's not enough to impart more of the same wisdom on living green or to document the same green buildings; the literature on sustainability needs arguments that push the thinking beyond CFL lightbulbs and green ratings. Lance Hosey, a former columnist at Architect magazine and the President & CEO of GreenBlue, has written a valuable book with a clear yet strong argument at its core: How something looks is as important to sustainability as how it performs.


Green building conserves energy, optimizes its ecological footprint, and improves performance. Green architecture, however, becomes an integral part of its community by embracing the total environment, a wedding of natural and cultural values. -from Chapter 7, "The Architecture of Difference"

Hosey does not limit his argument to architecture, but he does spend most of the book dealing with it. After laying out his three principles -- shape for efficiency, shape for pleasure, shape for place -- the book actually moves from the small scale to the large scale, from industrial and furniture design to landscapes, cities, and even the planet. Occupying much of this realm is architecture, which can certainly address his third principle better than, say, a fork or keyboard. Yet the power of Hosey's argument is how it applies equally to the various physical and natural realms that design addresses. Among other things, Hosey argues that form not only relates to performance it also contributes to our physical and psychological well-being. It is something I explored in an Ideabook at Houzz, taking his ideas on fractals and deep history and applying them to residential design.

Actually to say "his ideas" in the previous sentence is a little bit misleading. In The Shape of Green, what Hosey has really done is to mine the history of ideas to shape an argument about the aesthetics of sustainability. While some of the sources are directly related to the topic, such as Aldo Leopold or Christopher Alexander, an equal number of them, like Diane Ackerman and E.O. Wilson, are less common in books on sustainable architecture. While this means that Hosey's book often reads like an encapsulation of ideas by others, he is careful to connect them to his main thesis.

For some odd reason, given the wealth of sources and quotes, only a selected bibliography is provided. So when Hosey quotes Michael Benedikt, for example, the reader is not given the source for further reading, if so desired. This is unfortunate but not a particularly big distraction. My only other critique is that Hosey's book loses a little bit of steam in the last third, where considerations of landscape and urbanism are missing the depth of the chapters on architecture and design. The strongest chapters are where Hosey lays out his thesis, chapter which are not confined to a single scale or discipline. "Ecology and Imagery" is a particularly good chapter that should be read by students and professionals interested in sustainability. Ultimately Hosey's book helps push discussions of green architecture in the right direction, acknowledging form as well as performance.