Architecture on Display: On the History of the Venice Biennale of Architecture edited by Aaron Levy and William Menking
AA Publications, 2010
Paperback, 208 pages 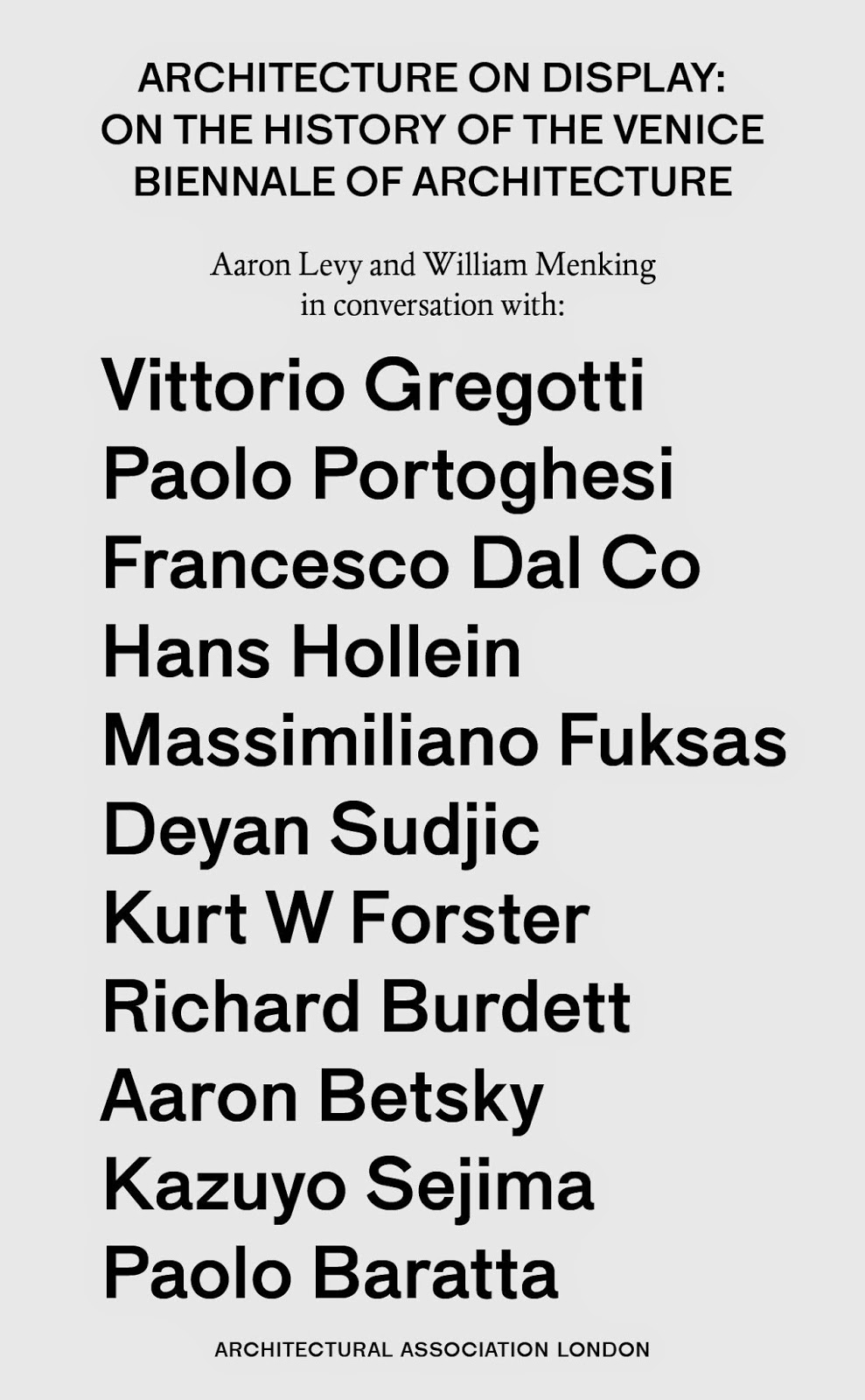 In one week the 13th International Architecture Exhibition gets underway in Venice. Better known as La Biennale di Venezia, the exhibition curated by UK architect David Chipperfield will be the first since Aaron Levy and William Menking performed their research initiative that involved interviewing past directors, from Paolo Portoghesi to Kazuyo Sejima. Most details of the international exhibition (one half of the Biennale, alongside the various national pavilions) won't be revealed until the press preview and subsequent onslaught of information a couple days before the Arsenale is opened up to the public, but if Architecture on Display is any evidence, for sure it will be a heck of a party. If anything is consistent among the interviews, even if the exhibitions are good or bad, the Biennale is an event where architects come to meet.

Levy and Menking's book is extremely valuable for piecing together a history of exhibitions whose documentation (in books, archives, and so forth) does not really elucidate the motivations and the proceedings of the every-other-year events. How, for example, did an exhibition focused on architecture come about? What did the early proponents hope to accomplish? This much starts to become clear, and through the various interviews so does the influence of Paolo Portoghesi's first Biennale in 1980 (the first, partly, in that it was the first to utilize the Arsenale). He famously lined part of the Corderie building at the Arsenale with facades designed by various architects. It was clearly a Postmodern street -- skin deep and full of historical references -- and it became a gauge for what later directors accomplished, even if very few people this century ever attended the exhibition.

Ultimately Levy and Menking are not interested exclusively in the Biennale, though they also do a good job in tracing the major parts of its history beyond its origins and initial exhibition -- Francesco dal Co's commissioning of James Stirling for the Biennale's bookstore, the renewal of the Arsenale at the time of Massimiliano Fuksas's exhibition, and other ways architects have left their suitable mark. They are interested in curating and its role in architectural production. Hence the research project they instigated with Architecture on Display continues with their Four Conversations, held in Venice, New York, London, and Chicago, in 2010 and 2011. Those partaking in the four conversations are not as exclusive as the first book, but many are curators, and others are academics, writers, and architects involved in how architecture displays itself. Like the first book, the results in Four Conversations are varied -- lacking a shared sensibility in approach -- but they provide plenty of fodder for readers with similar interests.

Even though each closed-door conversation has about fifteen participants, one or two voices rise to the fore in each, giving direction to the proceedings. For example, Aaron Betsky (the director of the Biennale in 2008) appropriately drives the Venice conversation, the most focused on the Biennale. Subsequently, Mark Wigley takes the reins of the conversation at the Storefront for Art and Architecture in New York, stressing the multiple nature of exhibitions and how they don't need to be experienced to be important (think Portoghesi's Biennale and Mies van der Rohe's Barcelona Pavilion); Mark Cousins provokes the group in London and offers some interesting experiments for curating architecture; Chicago doesn't have a singular strong voice, but Theaster Gates and his efforts on the south side are a barometer of sorts for the conversation.

Pocket-sized, each book is a fairly swift read that is made stronger by the varied voices partaking in the interviews and conversations. The audience for the books may be small, but this audience will for sure own these books. Architecture exhibitions may seem anachronistic in an age of digital publishing and social networking, but they give architects valuable opportunities to shape their culture and come together. In this regard, architecture exhibitions and curating aren't going away anytime soon.