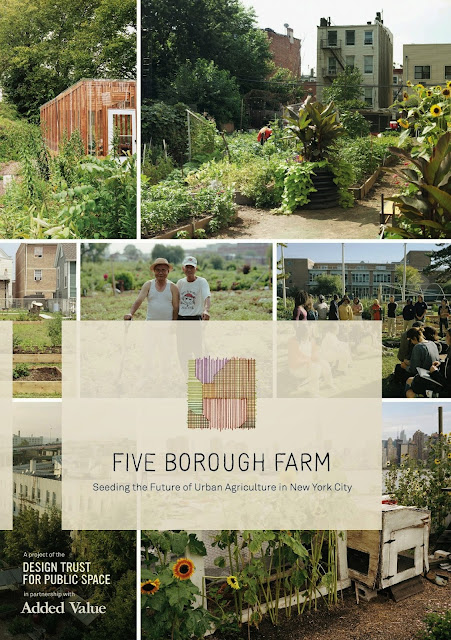 The name of the book and project by the Design Trust for Public Space and Added Value says a lot. First, the book is definitely about New York City. Second, it picks up on the growing popularity, awareness, and interest in urban agriculture, in New York and elsewhere. Third, and most importantly, it envisions the five-borough entity as a farm rather than a city. This last one is not a literal replacement of buildings for farmland, but a reconsideration of how we perceive the city, mainly as a canvas able to support growing food. Rooftops, pocket parks, vacant lots, these and other spaces have the potential as sites of city farming. But what is needed for this conceptual shift is desire (obviously growing, as the fact of Five Borough Farm attests), education, and legislation.

This publication is the first part of a larger project* by the Design Trust and Added Value that studies spaces in New York City that grow food, defines metrics for gauging its impact, and makes suggestions for municipal policies to further support urban agriculture. The study determined that more than 700 sites in the five boroughs (Manhattan, Brooklyn, Bronx, Queens, Staten Island) are currently producing food, separated into institutional farms and gardens, commercial farms, community gardens, and community farms. The study results and the advocacy that grows from it points toward, among numerous things, improved practices, secure land tenure, and ultimately a healthier and more sustainable city. On the other hand the Design Trust and Added Value do not promote the far-flung ideas of people like Dr. Dickson Despommier, who pushes for skyscrapers devoted to farming without realizing that tall buildings exist to make money, which agriculture has a hard enough time doing already on the ground.

On a similarly skeptical plane, before reading Five Borough Farm I encountered an article at Atlantic Cities discussing the opposing views of Pierre Desrochers's The Locavore's Dilemma and Sarah Rich's Urban Farms. The former attempts to dismantle urban agriculture in response to what he perceives as a threat to agri-business and the "10,000-mile diet." His stance and defensiveness are mind-boggling (the city will always depend on the country's resources...and vice versa, actually), but unfortunately they are what can be expected from a conservative and corporate position. Yet he completely ignores, per the article, the positive aspects of city farming that Rich and Design Trust/Added Value recognize: access to fresh fruits and vegetables, slowing and reduction of rainwater runoff into sewers, improved social bonds in communities, and the potential for more sustainable places.

Even though Five Borough Farm's canvas is geographically limited, much of the information in its pages and on the website can find application elsewhere, particularly the chapter on metrics and the one on policy. While the latter is geared to New York City's unique bureaucratic conditions, its focus on making farming an entrenched and long-term part of the city is important to many places; sidebars even illustrate lessons learned from places like Seattle. The book's design helps make the book readable to a wide range of people, given the care given to the illustrations, page layout, and the charts. I actually wish more illustrations like this one were included; urban agriculture is not the most exciting of topics, but it's one that should be important to every city dweller.

*"In the second phase of the project, the Design Trust will identity 100 publicly-owned sites citywide potentially suitable for food production, collect data on urban agricultural activity, and give New York City's farmers and gardeners a voice in the policymaking process."