Michael Brady is without a doubt the most popular television architect who was a recurring character. While his portrayal barely resembled the realities of architecture (as Jody Brown humorously recounts), he did a good job of setting a precedent for architects in sitcoms: He sits at his desk surrounded by pretty pictures of houses, but the profession takes a backseat to the usual sitcom antics. This is not a characteristic specific to architects but how sitcoms operate, inherently deriving their humor from situations, most of them revolving around the relationships of families and friends. The workplace is for dramas, and as far as I know no dramas about architects have been tried.

Very few succeeding sitcom architects come to mind — Ted Mosby, Elyse Keaton, Rob (a landscape architect) — so I'm surprised to hear that the new sitcom Partners revolves around the "bromance" of two architects who are partners in a firm. 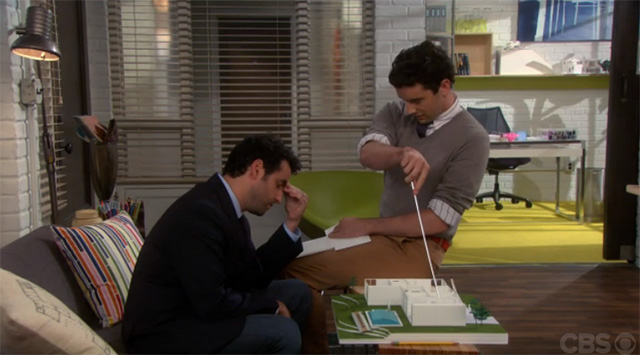 What's even more interesting is that the 2012 CBS sitcom bears a striking resemblance to a 1995 Fox sitcom also called Partners that also focuses on two architects. Both shows are about the tensions in the partners' friendships that arise from one of them getting engaged. The earlier show was cancelled after 22 episodes, and if the above clip (and reviews like this one) are any indication, the new Partners won't be around even that long.
Email Post