Book Brief #11: A Bunch of Journals

"Book Briefs" are an ongoing series of posts with two- or three-sentence first-hand descriptions of some of the numerous books that make their way into my library. These briefs are not full-blown reviews, but they are a way to share more books worthy of attention than can find their way into reviews on my daily or weekly pages. 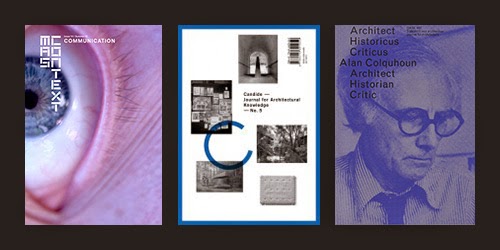 1: MAS Context 14: Communication | MAS Studio | Summer 2012
MAS Context is a quarterly journal created by Chicago's MAS Studio, led by Editor in Chief Iker Gil. The main idea driving the journal is the multidisciplinary responses to a particular topic for each issue. Those responding to issue 14's theme of communication include the Center for Urban Pedagogy, Klaus, Sam Jacob, Craighton Berman, Oriol Tarragó, and a bunch of international curators. Respectively they are coming at communication from civic policy, architectural criticism/cartooning, architectural practice, illustration, sound design, and exhibitions; and that's about half of the issue. Communication is a good balance of text (essays, interviews) and images (illustrations, visual essays) that are well-dispersed throughout the issue to make it a good browse and read. The theme is open-ended enough to invite varied responses from the contributors, but it's also a topic that is timely, what with more (and faster) means of communication at our disposal than ever before. Consensus is hardly to be expected, but the issue illustrates that what we communicate is as important (if not more so) than how.

2: Candide — Journal for Architectural Knowledge — 5 | Department of Architecture Theory RWTH Aachen | 2012 | Amazon
Candide is a bilingual (German, English) journal that is published twice a year. Unlike MAS Context no theme is given, but within the pages of each issue are five sections: Essay, Analysis, Project, Encounters, Fiction; this has been consistent since the first issue. In the fifth issue, Essay and Fiction feature short texts by a number of contributors. For Encounters, Ian Pepper examines Richard Serra's sculpture appended to the end of Robert Maillart's viaduct in Grandfey, an installation I was not familiar with but wish I knew of before my recent trip to Switzerland. Claire Zimmerman traces "architectural knowledge from Rudolf Wittkower to Reyner Banham," or from "legibility of form" to "memorability as an image." But the highlight for me is Project: Marcus Garvey Park Village, the Institute for Architecture and Urban Studies' only realized building. The thorough and multi-faceted history and oral history by Kim Förster reveals not only the commendable architectural design but also the greater intentions of the Institute and other parties (MoMA, UDC). Elsewhere the project might not be deserving of such attention, but it's a fascinating story that also captures New York City and the broader architectural culture in the 1970s.

3: OASE #87: Alan Colquhoun | OASE Foundation and nai010 Publishers | 2012 | Amazon
It's been many years since I've picked up my copy of Alan Colquhoun's Essays in Architectural Criticism (Opposition Books, 1981) to read his takes on modern architecture, Le Corbusier, typology, or Robert Venturi. While those topics rise to the fore among his writings, what I never realized until #87 of OASE was the quality of Colquhoun's architectural output. At the beginning of this journal looking at three sides of the man—architecture, history, criticism—is a short section documenting some of his projects, most with Colquhoun, Miller and Partners. What follows are essays by Kenneth Frampton (who introduced the collection of essays from 1981), Owen Hatherley, Michiel Riedijk, Sanislas von Moos, and others on Le Corbusier, typology, and so forth. The issue ends with the editors interviewing Colquhoun about his career and his views on how criticism, history, and theory have evolved in the last five decades. 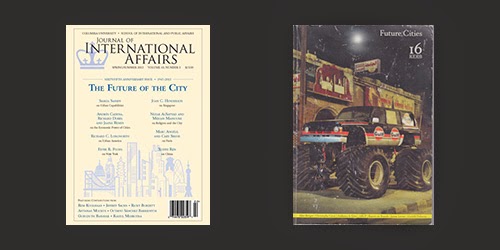 4: Journal of International Affairs: The Future of the City | Columbia University School of International and Public Affairs | Spring/Summer 2012 | Amazon
The year 2012 marks the 65th anniversary of Columbia's Journal of International Affairs, which started after World War II as "a forum for exploring topics of global concern." Based on the longstanding belief that "innovative solutions to contemporary problems of international affairs demand interdisciplinary solutions," this issued devoted to the city pulls together architects, sociologists, economists, politicians, and academics of various stripes. Not surprisingly, the writing is quite academic, but a number of interviews (with Rem Koolhaas, Ricky Burdett, Rahul Mehrota, and others) are a plain-spoken alternative to some of the density. The essays and interviews appropriately cover a global context of cities: China, New York, Paris, and Singapore, to name a few. People interested in the future of cities will find much of interest and value in what can ultimately be seen collectively as a positive outlook on urbanism this century.

5: Kerb 16: Future Cities | RMIT University School of Architecture + Design | 2008 | Amazon
Kerb, "a progressive design journal focused on contemporary landscape architecture issues from an international and national perspective," is celebrating its 20th issue this year. Issue 16, which I picked up recently in a remainder bin, is focused on "future cities," a broad topic that is surveyed by some familiar names (Alan Berger, Michael Van Valkenburgh, Arakawa + Gins, Arup) among others not as well known. While four years old, the issue's essays are still timely, looking at sustainable urbanism, sprawl, density, and other bits of urbanism. Flipping through it takes me back to Urban Design grad school the year before the issue came out. It's a solid collection of contributions that's very on-topic and ambitious in breadth.
Email Post
Labels: book-briefs