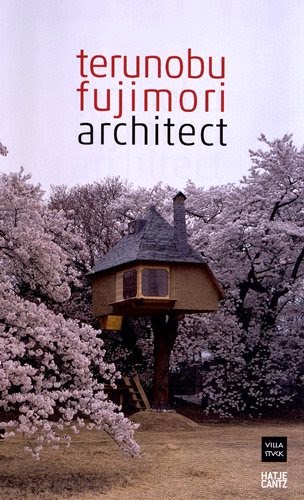 This book on Japanese architect Terunobu Fujimori was published on the occasion of a retrospective exhibition at Museum Villa Stuck in Munich. Fujimori, known for his quirky teahouse designs, contributed a "trojan pig" on wheels for Villa Stuck, though he changed it to a coffee house, since that drink is more popular in Germany than tea (but less so than beer, which he didn't think would work in a small space). The "walking cafe," as the architect calls it, is one of more than 20 projects collected in this very welcome book on the architect who practiced as an architectural historian for two decades before realizing his first building at age 42.

This now well-known past has led to designs that are highly idiosyncratic, neither repeating modernist tactics nor traditional ones. Fujimori actually spells this out as one of three principles ("my design should resemble neither the existing styles of any country nor the works of any modern architect") in his enlightening introductory essay (the other two principles are that "science and technology should ... be wrapped in nature" and "no boundaries between the site and surroundings).
In addition to the documentation of completed buildings and urban planning projects, and Fujimori's essay, the book consists of essays by Toyo Ito, editor Hannes Rössler, Dana Buntrock, and Thomas Daniell. The last focuses on ROJO (the Street Observation Society), which Fujimori started with artist Genpei Akasegawa and others in the mid-1980s to document the quirky and the everyday in Japanese cities. It's not hard to see the link between the humorous objects they have discovered and the buildings that Fujimori produces, yet the latter are hardly one-liners; there is a depth to his architecture.

In the past I've been drawn in particular to the "green roofs" that the architect has created, ones that entail lots more maintenance than extensive and intensive roofs popular today, but their reconsideration of what a green roof can be is paramount. The same can certainly be said about his teahouses, which maintain the detailed focus on the ceremony but question the location and the act of getting to them; many are perched atop tree trunks, and one is even suspended by wires. They are simultaneously alien yet familiar, handmade constructions that are hard to dislike. It's great to have the teahouses and other projects in one place for more people to appreciate.