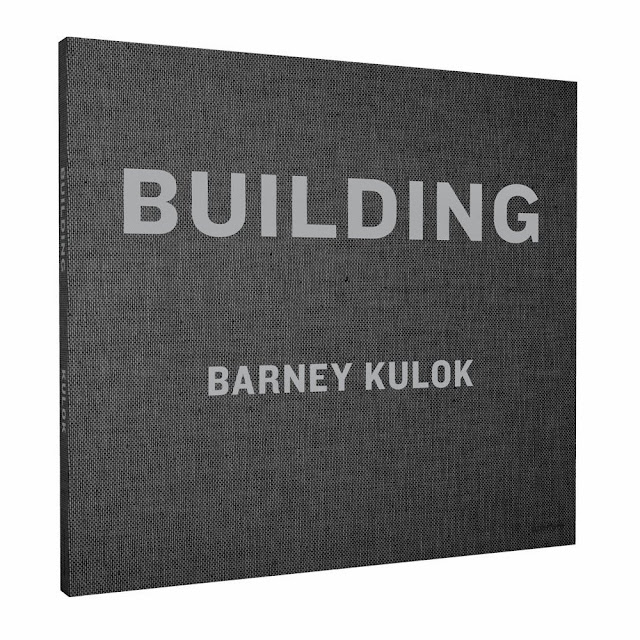 Last month the FDR Four Freedoms Park finally opened, close to 40 years after Louis I. Kahn's death, at which time he had completed most of the design. Alongside the pomp surrounding the opening came a number of reviews (all very positive) and lots of photos along the lines of my two batches. While photos focusing on the completed park and memorial are important, documentation of the design's realization is also valuable. For that we can thank photographer Barney Kulok, who was given access to the construction site about a year ago to document the construction.

What I really like about the 49 black-and-white plates collected in this handsome book is the way the construction is not documented through wide-frame images capturing large swaths of the place, but through small-scale details that border on painterly abstractions. This is not a book like Brian Finke's Construction, which focused on the people constructing buildings; rather, Building attempts to give a sense of the whole by examining its parts. Yet, it's not as simple as saying that the essence of the design is found in its details, because many of the details that Kulok documents were subsequently buried or removed.

The sum of the photos in Building is akin to poetry, where interpretation is open-ended because the shots don't settle for easy presentations of what we think of when we think of "construction site"—very little machinery is present, for example, and tools appear as aesthetic objects more than useful objects. I like to think that even the most mundane detail—a guideline tied to a piece of rebar driven into the earth; a haphazard assemblage of wire, cloth, and more rebar closing a hole in a chain-link fence; a piece of wood resting on concrete steps—reveals something about the specific construction process on Roosevelt Island. Each photo is a trace of human action, even as only three of the nearly fifty plates have people within the frame; they tell stories beyond the immediate moment captured.

The most interesting plates border on the composed, and not just in terms of photography—angle, framing, aperture, etc. I wonder if a cubic piece of stone teetering on the edge of a much larger piece of stone was found by Kulok as he traversed the job site, or placed there intentionally, perhaps inspired by something he saw but manipulated to make the ideal photo. Images like these may turn on my skepticism radar, but in the end I don't think it matters if they're staged or not, because they still serve to reveal the construction. A "clean" pile of dirt on stone pavers says just as much about the filling in of the voids between stones as does a "dirty" pile of dirt on stone pavers (you'll have to trust me on this one). But the former is just a better photograph, a piece of poetry rather than part of a documentary.

For those interested in hearing Kulok speak about the book, he'll be in conversation with Joel Smith this evening at Aperture Gallery and Bookstore, 547 West 27th Street, NYC. The event is free and a book signing will follow the conversation.