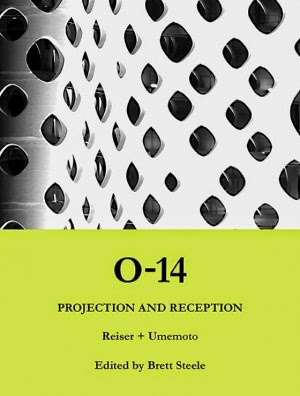 RUR Architecture, the office of Jesse Reiser and Nanako Umemoto, has realized very little physical architecture. Most of the projects documented on their website exist in the realm of the computer and idea. So it's amazing that they were able to realize a 22-story office tower in Dubai that does not compromise their questioning of architectural norms. O-14 is a pinched and perforated cylinder that rises from the desert, dwarfed by many of the city's taller buildings but holding its own with its unique expression. The building is explored in this book from the Architectural Association, featuring the architects' own explanations accompanied by numerous photos and illustrations, and essays by Brett Steele, Sanford Kwinter, Sylvia Lavin, and Jeffrey Kipnis.

The norm against which RUR works is the glass box, the default for office buildings in Dubai and the rest of the world. The concrete exoskeleton is as far from the norm as can be, even as it sits three feet in front of a window wall that is just such an enclosure. In this sense, O-14 can be seen as a typical (if undulating) glass office building wrapped by a white veil. This veil (one among many metaphorical terms that can be used to describe it) helps to shade the 21 floors of offices, and the gap between the concrete and the glass contributes to a stack effect that aids in passive cooling. So the benefits of the wrapper serves a number of functions beyond the formal, even if RUR admit that these are the result of their design process, not conscious efforts at meeting performance requirements.

The book does a great job of explaining why O-14 looks the way it does and any repercussions as such, even if much of Reiser and Umemoto's text is unnecessarily obtuse. Yet their sometimes dense writing is nothing compared to the contributor's essays, which attempt to examine the building relative to history, science, and other contexts, but which run the risk of draining any appeal of the design from the reader's mind. And the appeals are easily apparent. While I would have liked to see more attention given to the experience of the building from the inside (the various views through the hundreds of holes is a great side effect of the design) instead the predominant focus of how it appears from the exterior, the building is certainly deserving of a book-length treatment.