Cycle Space: Architectural and Urban Design in the Age of the Bicycle by Steven Fleming
nai010 Publishers, 2012
Paperback, 176 pages 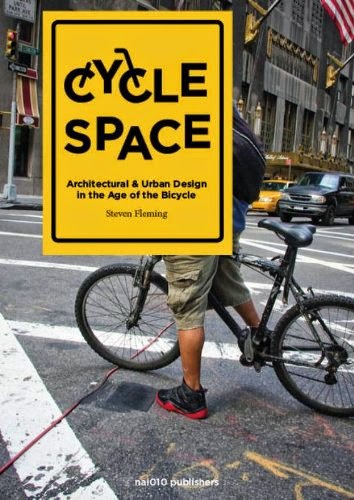 On page 20 of Cycle Space Steven Fleming admits, "By reading this book, you're indulging my bike-centric worldview that says walking is tiresome and boring." It's funny to think that a book promoting bikes in cities would find an issue with walking, rather than setting its sights squarely on the automobile (which it does at times), but this rather humorous comment starts to get at the gist of Fleming's book: The qualities that make biking a desirable thing need to be recognized in order to be considered spatially in an appropriate manner. Fleming discusses the usual reasons to opt for a bike over a car, or even walking—cutting carbon emissions, getting in shape, reducing traffic—but he prioritizes the sheer pleasure of riding a bike over any of these.


Our shame as architects and urban designers is that we have sat back and allowed by-the-book engineers to design infrastructure for bikes with even less inspiration and care than they would apply when designing a road. It's time someone intervened.

This next quote comes much later in the book, but at this point the link between the pleasures of cycling and the space that bike's occupy is clear. More considered streets and other thoroughfares that take the act of bike riding into account—rather than just setting aside a strip based on the "real estate" a bike and rider occupies—should be the goal. Fleming's argument unfolds across 8 cities around the globe, accompanied by 8 chapters on related considerations: New York and "From Cars to Bikes," Copenhagen and "Aesthetics, Modernism and Meaning," Portland and "If Architects Designed Bicycle Transit" (from where the above quote is taken), and so forth. The tours are cursory and funny at times, but they do a great job of honing in on what is unique about each context, such as the historical importance in Portland's decision to let a highway bypass the city, creating bike thoroughfares and nurturing the potential for bicycling in a rainy and hilly place.

Focusing on pleasure has other consequences that accompany reshaping city spaces for bikes, such as provisions for bike commuting. I was a warm-weather bike commuter when I lived in Chicago, using the busy but lovely lakeshore bike path, but getting to work drenched with sweat kept me from doing the 15-mile round-trip ride more often; and the perceived danger in riding a bike in New York City (confirmed on my first few attempts) has kept me off my two wheels here for a while. Yet when employees add showers, and cars and pedestrians respect bikes in a mutual sharing of the street (an ideal that may be a pipe dream) then the pleasures of riding extend to commuting, not just weekend rides. Ultimately I find Fleming's argument appealing for the United States, where the automobile is still seen as an enjoyable way of getting around, even as increasingly long and stressful commutes are tempering this long held notion. Reorienting that stance to include bicycling might just have the effect of balancing the different modes of transit on our city streets. In this regard Fleming has given readers and bikers 8 snapshots and many more ideas for thinking about ways to move forward.