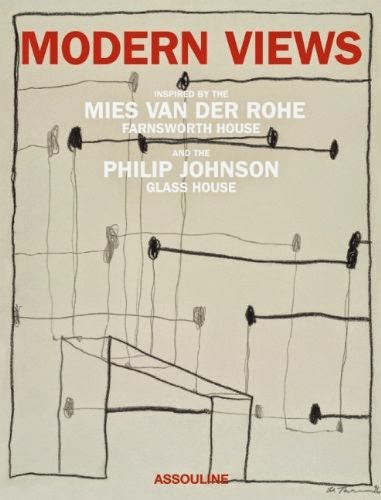 For the month of February I'm hosting a debate at Glass House Conversations on traditional versus modern architecture. My participation prompted me to flip through my copy of the companion book to Modern Views, a 2010 project that benefited Mies van der Rohe's Farnsworth House and Philip Johnson's Glass House, both operated and maintained by the National Trust for Historic Preservation.  For Modern Views, "One hundred contemporary artists, architects, and designers created and donated works of art and written statements, capturing their inspiration about these iconic buildings and the architects who created them."

Beyond the National Trust connection, the two buildings are obviously linked by their form (rectangular boxes), material (glass), and timing (1949 for Glass House, and 1951 for Farnsworth House). It's also been shown that Johnson knew about Mies's design (he started it in 1945) but beat him to the punch. This history often ignores just how distinct each building is from the other—the way each addresses the ground (Farnsworth raised above, Glass House directly upon it); the related structure (Mies carefully detailed the steel to make the building look like it is magically propped up, though the steel structure at the Glass house is more incidental, blending in with the glass framing); the clients (Mies designed it for Dr. Edith Farnsworth while Johnson designed it for himself); the articulation of bathrooms (Mies chose wood, but Johnson opted for brick); and the function (the Farnsworth House is a single building that serves as a country retreat, but the Glass House was built alongside the Brick House that contained Johnson's bedroom). Yes, each house is a glass box, but there are infinite variations within that term to give each house its unique effects.

The catalog of approximately 100 works in Modern Views are split into four chapters: Architects, Landscape Architects, Artists, Designers. They are bookended by essays (Paul Goldberger, Phyllis Lambert, Sylvia Lavin) and original drawings of the Farnsworth House and Glass House. About half of the architects (the biggest chapter) simply dug something appropriate out of their archive, which is mildly disappointing. The ones that took the time to create something that addressed each house or the relationship between the two are a hit-or-miss bunch, but they also serve to say as much about the author as they do about the two houses. A good example is Léon Krier's imagining of a "future for the glass house" with timber framing, pitched roof and divided lights; it is more humorous than provocative. My favorite is Jeanne Gang's sketch of the Farnsworth House, where the trees are drawn in colored pencil then erased in part to define the silhouette of Mies's floating structure; nature is the key, not the architecture.

Similar distinctions—between old and new creations for the project—apply to the landscape architects, artists, and designers. Overall I'm drawn to the pieces that look at the relationship between the two houses, rather than the ones that look at just one house or find words to convey how an old work relates to the creation of Mies and Johnson. In this vein Fritz Haeg's piece—two pillows stitched with elevations of each house between the names of the clients and architects (Edith/Ludwig, David/Philip)—is a highlight; it gets at the personal nature of each house, going beyond the abstractions and generalizations that have been applied to them since the 1950s. Now they are museums, so that personal connection is just a memory, sacrificed for people to be inspired by their architecture and settings.