Everything All at Once: The Software, Videos, and Architecture of MOS by Michael Meredith and Hilary Sample
Princeton Architectural Press, 2013
Paperback, 176 pages 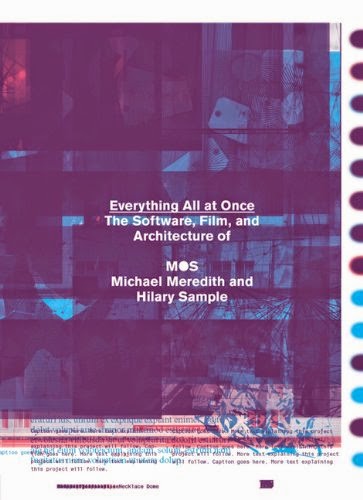 A visit to the website of New York City's MOS reveals six projects tagged Software, six as Video, six as Buildings, six as Installations, and four as Pavilions. These categories start to get at the process and output of the duo of Michael Meredith and Hilary Sample; they also hint at why their first monograph is called Everything All at Once. The title's double entendre describes the book's presentation, which color codes the software, videos, and architecture of MOS but overlaps and merges them together. More importantly it refers to their working process, in which the three parts of the subtitle are treated to an equal extent, such that the front flap's statement that they "exchange plans or sections for software and videos" seems slightly off target; instead of serving the architecture, the software and videos can actually become the end result.

While MOS has realized buildings, and is doing more of them on an increasingly larger scale, the architecture they include in the book are temporary installations and pavilions. This adds an even stronger element of time to their constructions, furthering the overlap between the architecture and the software and videos. The short shelf life of projects like Afterparty at MoMA PS1 means that experience and events are that much more important. In turn the videos imagine happenings within their architecture, both before and after construction. Unfortunately the captions that accompany the video images are sometimes illegible, partly from the fluorescent pink used for the videos (software is blue and architecture is purple) but mainly because the white font is smaller than small.

While I'd question leaving out some of MOS's more well known projects (Puppet Theater, Foreclosed), the selection reinforces the linkage between the three realms and the duo's questioning of the norms of architectural production. They are definitely doing something that works, given how the appeal with academics, institutions, and (I'm guessing) a larger public that does not care about the intellectual nature or curatorial positions of their work. Their installations have an obvious appeal that is rooted equally in form and experience (talking form my own experience, Afterparty was especially rewarding). Therefore the influence of the software (enabling complex forms) and videos (a means of envisioning experience and event) is evident in their architecture, even as those pieces aren't grasped by everybody lucky enough to visit their installations and pavilions in the short times they exist.