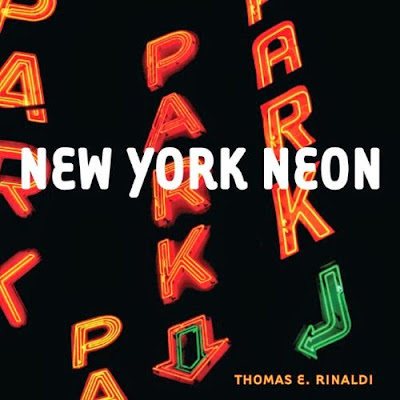 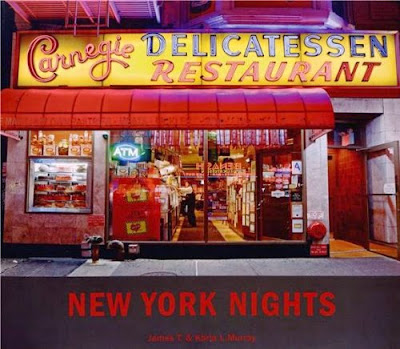 November saw the release of two books documenting New York City in the hours between sunset and sunrise, when the glow of artificial lighting adds color to the city's sidewalks. While each book sets its sight on old establishments (you won't find Times Square in these titles), and the names New York Neon and New York Nights even confuse matters, the differences between the two are nevertheless great, as will be seen. Nevertheless, beyond the obvious overlap in subject matter and format (photography books), the books share an appreciation of New York City's ever-changing streetscapes as evidenced in early attempts at getting attention in the 24-hour metropolis. In this sense the books are as much history as photography.

There is actually a smidgen of truth to the old statement about judging a book by its cover. That's not wise if faced with an either/or decision of which one of these books to buy, but an important difference can be gleaned from a quick glance at these covers: With its black background and floating words, New York Neon is about the signs, while the frontal shot on New York Nights signals it's about the shops and restaurants. Rinaldi describes how he initially photographed the signs a couple f-stops lower than what his light meter told him, but over time he varied the technique to show more urban and architectural context; still, detailed shots of signs on dark backgrounds are the majority. On the other hand, the photos in New York Nights are mainly straightforward views of a storefronts, like a nighttime version of the Murray's widely celebrated Store Front. Their book is about the sensations and experience of the establishments on the sidewalk, as they invite us inside through their lighting and interior glow.

Another major difference between the two is size. New York Neon is a fairly compact book that is easy to hold, all the better to hone in on the details of the signage. Photos are one or two to a page, with the occasional two-page, full-bleed spread. Captions sit in the white space on the page but the overall effect is of dark pages with splashes of color. Each sign is distinct but repetition can be found in orientation (vertical and horizontal signs predominate), color (lots of red and orange), and type of establishment (one page even features six liquor stores with very similar signs). On the other end of the spectrum is New York Nights, which spans over two feet when opened on a table. Most of the photographs are one to a page, documentary-like, with text on the opposite page. Each photo is therefore a decent size, enough to grasp the details captured in the duo's long-exposures.

One more difference is how the books tell their stories beyond the photographs. With his sights squarely on neon, Rinaldi delves into a lengthy history of illumination in the city, spending a good chunk on the fascinating "anatomy of the industry." Many of the photos even credit the sign makers, a testament to the skill required to produce neon signs. The Murrays focus on the establishments through interviews with proprietors. They are not as interested in the details of lighting that give each storefront its presence at night, outside of what comes across in the photographs.

Even with the above differences, each book is accurate in its depiction of the city at night. Neon is a collection of quick glances where the glow of the neon is burned into our memory. Nights feels like sideways glances as one walks home from a bar. Neither book has many people, so the reader can be alone with the images and make them as much a part of his or her memory as they are for the photographers who snapped them.