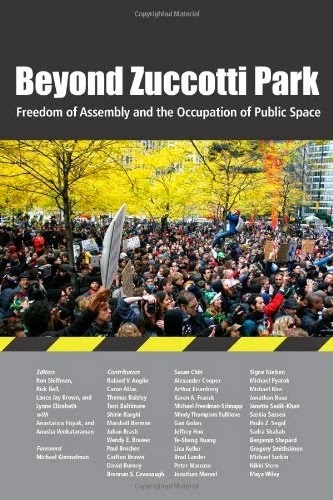 You can't evict an idea whose time has come.

The above words were written when New York City police were evicting Liberty Square (aka Zuccotti Park) and the Occupy Wall Street encampment in November 2011. The statement attempts to maintain the momentum that OWS had gained since taking over Zuccotti Park in Lower Manhattan on September 17 of the same year. But it also implies that the idea is more important than the physical occupation of (semi-)public space, and therefore the latter is not as important or not integral to the movement. Given that OWS is nowhere to be found in the news 15 months after the eviction, this would seem to indicate that physical presence in public space is really important after all. But even if OWS lies in wait, did those two short months have a lasting impact on how public spaces are seen and used? And what does the movement point to in the design and evolution of the city, particularly in regard to open and public spaces?

These and many more questions are tackled by the numerous contributors to Beyond Zuccotti Park, a book and initiative that are a collaboration of the Center for Architecture, City College of New York School of Architecture, and Pratt Graduate Center for Planning and the Environment, with New Village Press and Architects/Designers/Planners for Social Responsibility. As the title indicates, the collection of essays is not about OWS; it's about the impact of OWS and the thinking about assembly and public space that it has sparked. Of course there are contributions that focus on those couple months in 2011, such as Alexander Cooper's (the designer of Zuccotti Park) analysis of various Occupation sites relative to public transit and Rick Bell's 20 common points among the Occupy "mini-cities." Most of the essays addressing OWS are put into the first section—Occupy! The next four sections attempt to categorize the remainder—Emplacing Equity and Social Justice, Reimagining Public Space, Public Space Over Time, and Responsive Change (the last is split into Public Sector Agents of Change and Designers and Developers as Agents of Change).

If the book were limited to OWS and Zuccotti Park essays it would be much more honed but also a lot slimmer. As is, the topics are looser but the contributions greater and from a larger pool of voices, some of them quite well known. Their takes on public space and assembly could be read as recipes for making urban open spaces amenable for exercising democratic rights. It's certainly a goal that goes well beyond design; or more accurately, the context that design works within is much more charged and contested than in other realms of building and landscape. Consensus won't be found in the varied collection, but like OWS itself, there is a shared dissatisfaction with things, in this case how the public fits into public space.