Architecture Concepts: Red Is Not a Color by Bernard Tschumi
Rizzoli, 2012
Hardcover, 776 pages 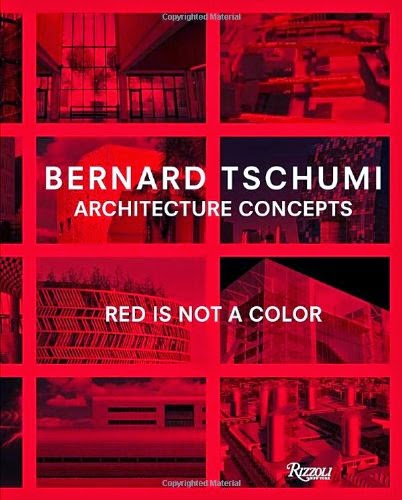 On page 741 of this hefty 7-pound tome spanning five decades of Bernard Tschumi's architecture and writing comes a new essay, "Architecture Concepts." In it the architect writes, "Concepts are what allow us to apprehend reality," and, "Inventing a new concept always starts by determining the right architectural question." Those familiar with Tschumi's theoretical work will not be surprised by his starting point; a 1990 book with some of his writings is even called Questions of Space (Architectural Association). But readers who have journeyed through the first 740 pages of the book will have grasped it as well, given that Tschumi begins each project's presentation with one or more questions—Le Fresnoy, for example: "Can one achieve architecture without resorting to design? What if, instead of designing a new building, you keep one slated for demolition? How do you insert an original program inside the old and new structures simultaneously? How do you reconcile coherence with multiplicity?"

The word "you" stands out in these questions. As I wrote about it in my Notable Books of 2012 list at Designers & Books, "Curiously [Tschumi] writes in the second person, a tactic that is intended, among other things, to 'draw the reader in,' and which ultimately is successful due to the text’s conversational tone and its thoughtful integration with numerous illustrations." This happens throughout the book but most notably in the "photoessays" that preface the five parts: A-Space Event Program; B-Program: Juxtaposition/Superimposition; C-Vectors & Envelopes; D-Concept/Context/Content; E-Concept-Form. The illustrations in these sections fall well outside of Tschumi's architecture, such as a photo of a gymnasium being used for voting in Part B, where Le Fresnoy is located. This photo reveals how the illustrations are part inspiration, part polemic, and they strengthen his arguments; the gymnasium, for example, makes it clear that programmatic juxtapositions are becoming the norm, not the exception.

The book's five parts are thematic but they are also chronological (with a few exceptions), illustrating shifts in concerns over the years, if gradual rather than dramatic ones. And this does not mean, for example, that "space event program" has been set aside in the current emphasis on "concept-form." Rather, the conceptual approaches have expanded as commissions have done the same. But with more and more projects since his breakthrough 1982 competition win for Parc de la Villette, there is a sharp decrease in the essays from Part A and Part B to the rest of the book. This is no surprise, as Tschumi, like other academic-architects, wrote a lot in the 1970s and early 1980s when work was slim. That theorizing laid a groundwork for conceptualizing about projects that would later make the move successfully from idea to reality. This large book encapsulates the evolution of Tschumi's five-decade-long (and counting) career, making his thinking and architecture more accessible and understandable to a larger audience.