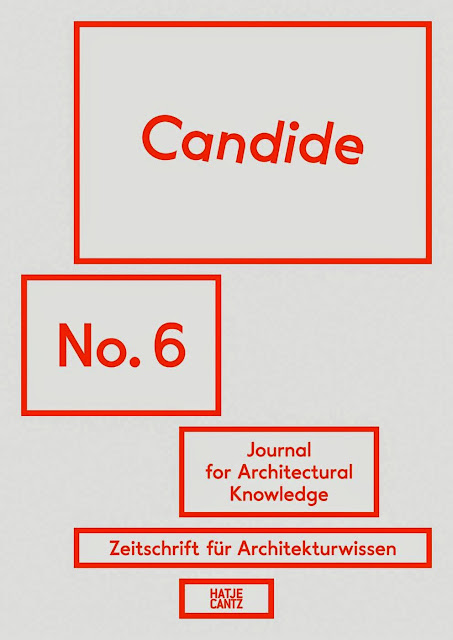 Since its first issue in 2009, Candide - Journal for Architectural Knowledge has followed a format with five distinct sections: "'Analysis' investigates forms of the built environment, looking for the knowledge invested in them. 'Essay' offers space for a personal exploration of one of the grand themes of architecture. 'Project' serves as a forum for practicing architects and their works. 'Encounter' highlights the wealth of experience of famous or unjustly forgotten architects. 'Fiction' appeals to the power of the imagination, which occasionally transports more knowledge than does empirical research." Rather than asking authors to respond to a theme (as is the norm in a number of architectural publications these days), Candide uses the sections as means of exploring architectural knowledge through different means of expression and investigation; writing an analysis is much different than writing fiction, for example, so undertaking one or the other relative to a certain topic should yield unique results.

Issue no. 6 begins with the Essay on architectural acoustics in the first two decades of the 20th century. Sabine von Fischer discusses how Adolf Loos, Herman Sörgel and Siegfried Ebeling approached technology, aesthetics, and metaphysics through sound in architecture. It's the most academic of the five contributions in the issue, and the parallel struggles of architects 100 years later is obvious, though it's not clear if the three articles are offered up as examples of what not to do, or if they were the only voices tackling the issue at the time.

Tanja Herdt's Analysis of Cedric Price's McAppy Project follows. Like many people I am familiar with Price's Fun Palace and the Potteries Thinkbelt, but not his research and design for Robert Alistair McAlpine. Price looked at the social conditions of various job sites and made proposals aimed at improving working conditions. Herdt appropriately paints Price as an ahead-of-his-time designer that looked beyond formal solutions and incorporated a variety of inputs in his proposals. It is a thorough analysis and a very interesting overlooked project to learn about.

Of the remaining three contributions two are interviews—with artists Anne and Patrick Poirier, and with architect Anna Heringer—and they are excellent pieces focused on ruins and earth architecture, respectively. The fifth piece is a work of Fiction, a somewhat disjointed radio play that tackles the demolition of a public housing development outside Paris. It is probably much better as an actual performance, but as words on the page it fails to hold interest (as good fiction does) as it attempts to convey the voices of the different players in the demolition (residents, architects, workers).

It's worth noting that the five-section format also extends to the journal as an artifact. The design of the first five issues was consistent, and starting with issue six the journal has a new designer (Benjamin "E.P.i.M.H.i.P.F." Critton) and a new look, though one that maintains some details—paper size, exposed spine, a mix of papers. So Candide will change its design every five issues, but it remains to be seen how far it will take the number five: Will it have a planned shelf life of five times five issue, perhaps? The sixth issue shows that there is plenty of good topics to help inform readers' architectural knowledge.