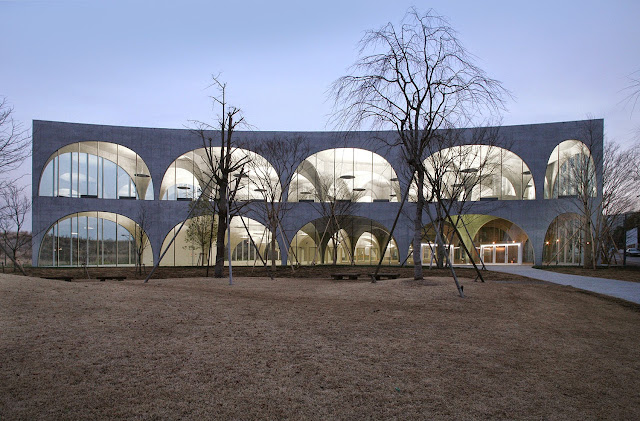 The following images are courtesy the Hyatt Foundation, and quotes are from Toyo Ito: Forces of Nature, edited by Jessie Turnbull (Princeton Architectural Press, 2012).

Yesterday came the news that Toyo Ito is the 2013 laureate of the Pritzker Architecture Prize. He is the sixth architect from Japan to be awarded the Pritzker, following Kenzo Tange (1987), Fumihiko Maki (1993), Tadao Ando (1995) and the duo Kazuyo Sejima and Ryue Nishizawa (2010). The jury commended his "body of work that combines conceptual innovation with superbly executed buildings" and "a spectrum of architectural languages," or "personal architectural syntax." The lack of formal repetition or branding in Ito's 40-year career is refreshing, though in the last decade or so he been exploring a distinctive approach to melding structure and surface through increasingly complex forms. A few of those projects are highlighted here with quotes from Ito. 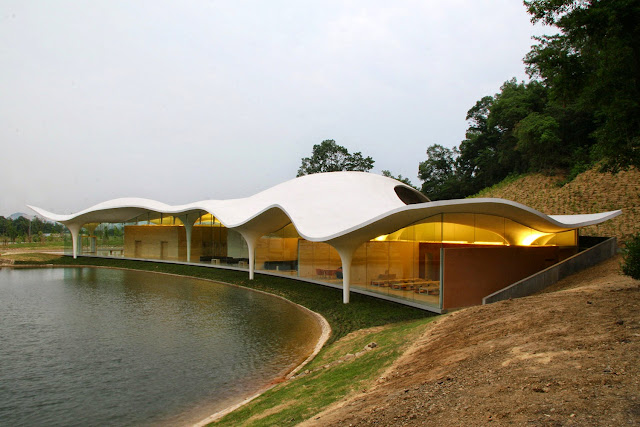 The earliest of the three projects is the Meiso no Mori Municipal Funeral Hall (2004—2006) in Kakamigahara-shi, Gifu. I was first intrigued by the project's undulating roof/column, a condition I blogged about with it alongside some other projects exhibiting similar traits. Ito pointed out that "the crematorium was not intended to have an accessible roof, but at the opening ceremony I remarked, 'Well, the roof is probably the best space in the building,' and then everyone started to climb up there. An exception was made, and guests were allowed to explore the roof." 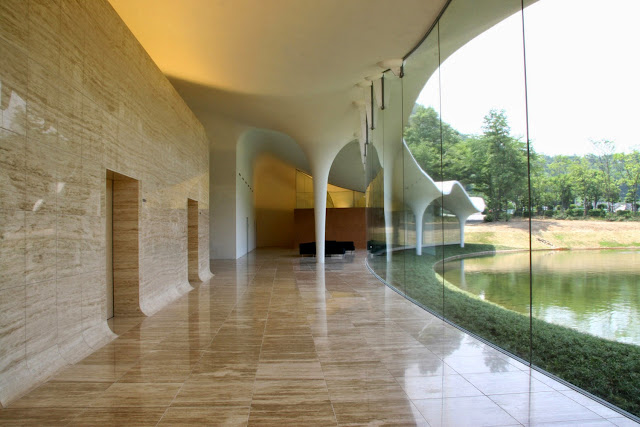 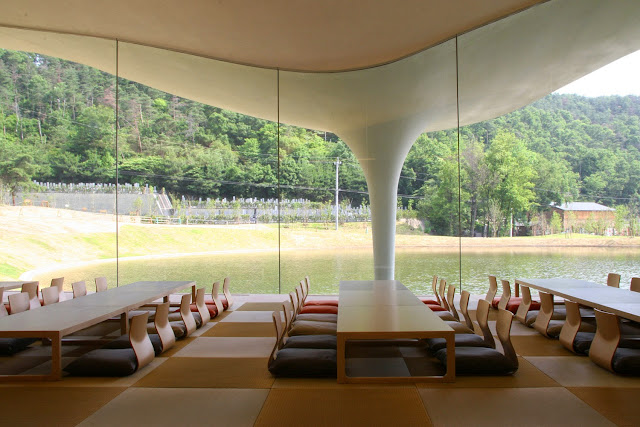 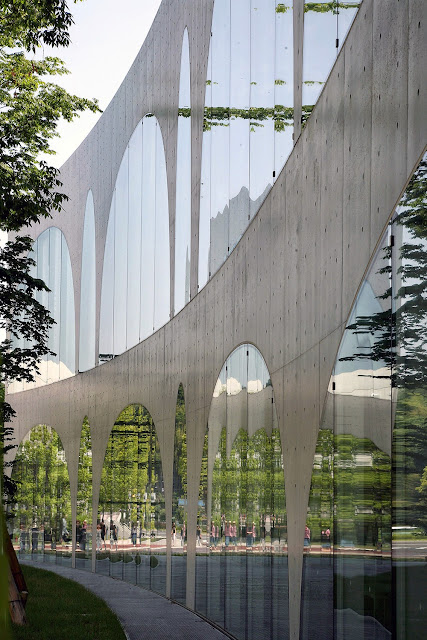 Both the crematorium in Gifu and the Tama Art University Library (2004—2007) in Hachioji-shi, Tokyo, were engineered by Mutsuro Sasaki, who started working with Ito on the Sendai Mediatheque (1995-2000). Tama's structural system "consists of interlocking arches with spans ranging from roughly six to sixty feet." Further, "The core of the arch is made of steel, surrounded by reinforcement, with concrete poured on top. This structural system allowed us not only to make the walls extremely thin but also to create a very small footprint for the column, with the intention that the arch would appear to be floating in space." 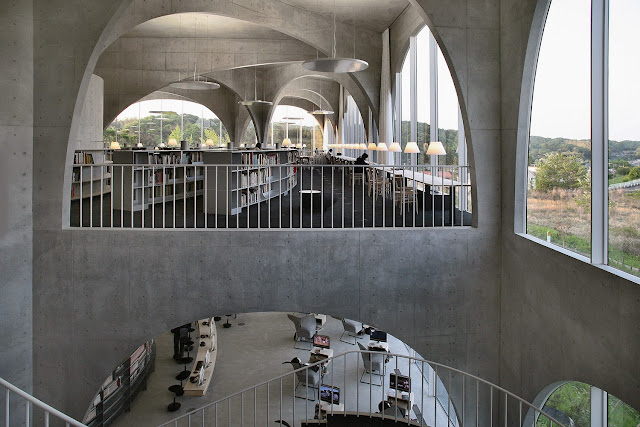 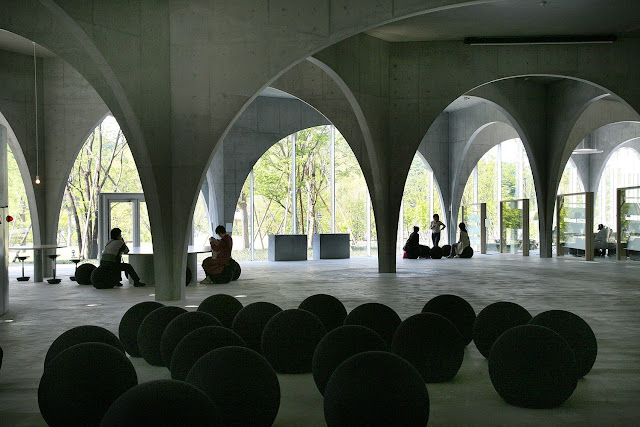 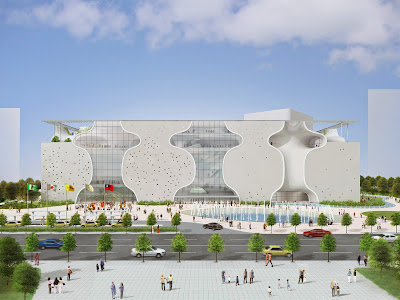 The last project is the Taiching Metropolitan Opera House, now under construction in Taichung, Taiwan. Cecil Balmond is the structural engineer of choice for this large and incredibly complex project; the two started working together on the Serpentine Gallery (2002). Three theaters and various other spaces are contained in an orthogonal form where "the interior is punctured with countless holes, so that levels are connected horizontally and vertically. Cave-like holes penetrate the form." Ito describes how the concrete structure "came from taking two flat surfaces, dividing them into a grid, and then systematically connecting circles around alternate points vertically with a flexible fabric to create a three-dimensionally curved, continuous surface." Further, "By repeating the polyhedrons and then connecting them vertically—and then smoothing them out—we created this structural system." I'd wager that when the building is done it will be considered Ito's magnum opus. 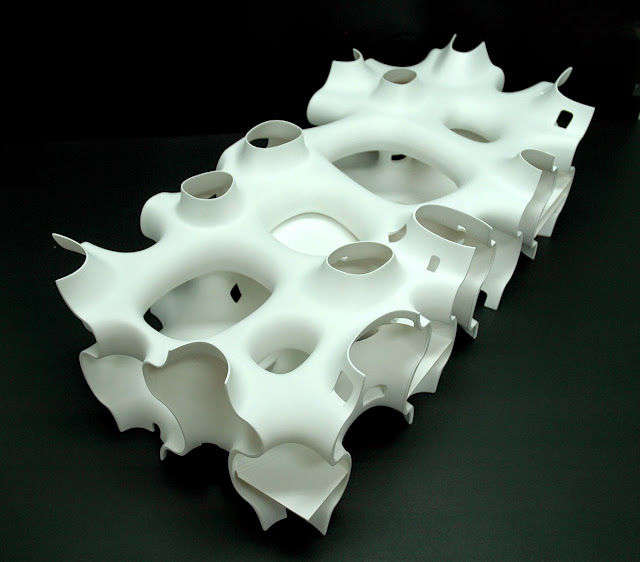 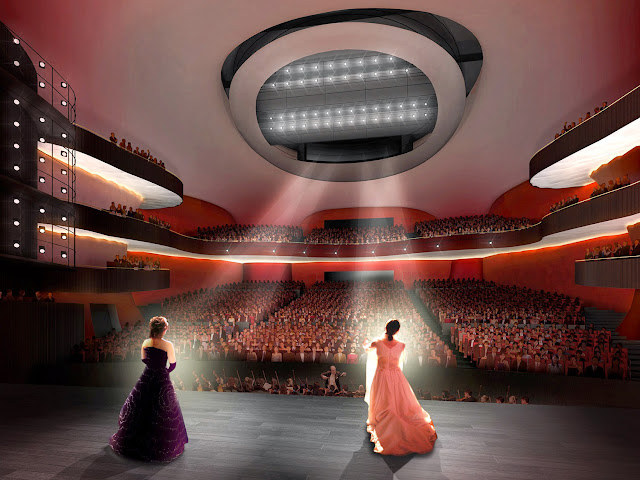 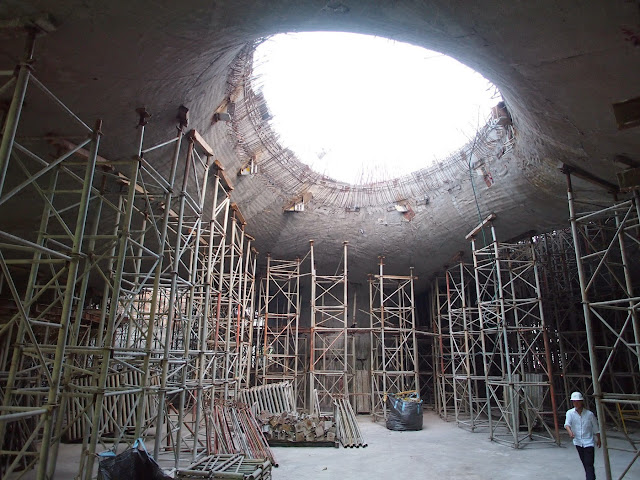