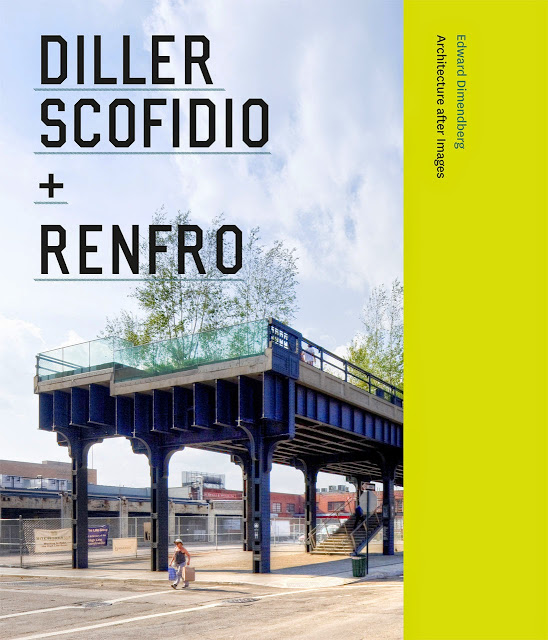 Gracing the cover of film professor Edward Dimendberg's analysis of Diller Scofidio + Renfro's first three decades of output is a photograph of the southern end of the High Line park, designed with James Corner and Piet Oudolf. Chances are that a mention of the firm or one of its members to most people will bring to mind this project, whose first phase opened in 2009 and whose third phase is now under construction. But of course a lot happened from the late 1970s, when Elizabeth Diller and Ricard Scofidio started working on small projects together, to the opening of the High Line (realized with partner Charles Renfro), one of the most important projects in New York City this century. And that is the value in the this book: charting the history of a duo and trio that is intent on questioning the conventions of architecture at every turn and have made a success of it.

I've read four and reviewed three books on DS+R—Flesh: Architectural Probes, Scanning: The Aberrant Architectures of Diller + Scofidio, Blur: The Making of Nothing, and The Ciliary Function—so I was pleased to learn so much reading Dimendberg's book. He covers projects that are otherwise overlooked (Plywood House from 1981 is just one example); he goes into detail on projects to explain how they came about or how they fizzled (the account of Eyebeam is especially good in this regard); and he approaches the firm and their multi-faceted architecture (buildings, landscapes, performances, installation, books, etc.) from outside of the profession. From outside is perhaps the best location to analyze the projects and trajectory of an office with increasingly more and more traditional architecture commissions but an unwillingness to follow their conventions or be bound by their rules. After all, these are the architects who "constructed" a cloud, one of the most fleeting projects imaginable but one of the most memorable Expo contributions in recent history.

The subtitle to Dimendberg's book—"Architecture after Images"—indicates that he is looking at DS+R's projects from the perspective of a film scholar, somebody who looks at images as charged with meaning. He quotes Sigfried Giedion's claim that "only film can make the new architecture intelligible," alluding to the appropriateness of him tackling a book on DS+R. Yet at one point Dimendberg admits that Diller made even better use of Giedion's quote: In a Columbia GSAPP lecture on their transformation of Lincoln Center she cycled through the same 15 slides a number of times, changing her delivery each time as if she were talking to different project stakeholders. Film worked to explain architecture to just about everybody outside of the usual architects.

Diller's lecture also hints at the value and troubles with images relative to architecture. Yes, they can help to convey information about spaces and places, but they are also strange bedfellows today: Architecture is dependent on images for spreading designs to a globalized audience, but the latter rarely do the buildings justice, and the more that images inform architecture (in the sense of creating a distinctive vantage point to appreciate a building, for example) the more architecture is negatively affected. But in the work of DS+R images don't exist to merely document, they "investigate the visual and spatial realities of the present," as the author asserts. Hence Dimendberg's precise wording of "architecture after images," such that DS+R's designs go beyond the simple appearance of things to the complexities of contemporary culture, the questioning of vision, and the blurring of technology and architecture.

Yet by the end of the book, when Dimendberg has brought the reader close to the present day, what has been conveyed is not a analytical treatise or the academic document of a film scholar; it is a biography of the architects and history of their past projects by somebody who appreciates their work. It is well-researched, insightful, and sometimes candid. He describes their work carefully and makes it a pleasurable read. He also rebukes critics who target certain aspects of DS+R's work. In this sense a do-no-wrong stance does come to fore every so often, but it does not permeate the book nor overshadow the excellent job that Dimendberg has done in explaining why DS+R are one of the few architects today worthy of such a thorough treatment.